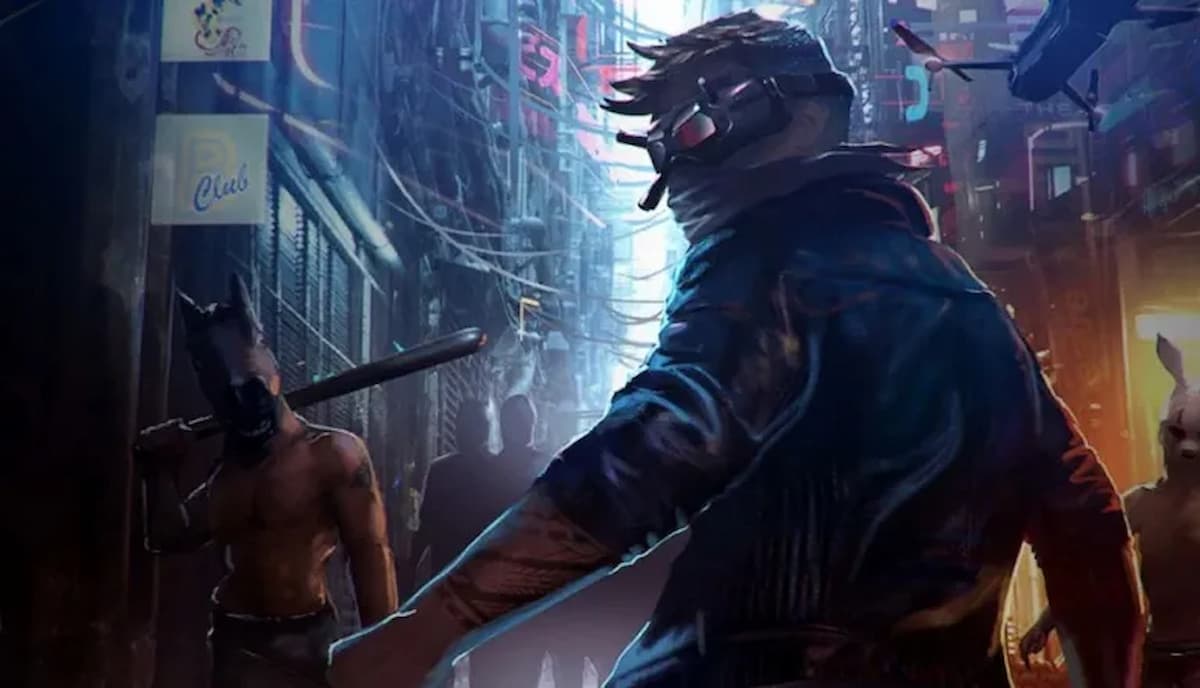 The story takes place over the course of a single night. You play as Babyface, a young punk who used to be a part of the criminal underworld but got out eventually. However, he soon gets lured back into that life by a mysterious AI drone that starts talking to him, and he finds himself on a mission to prevent the syndicate from taking over the entire city before sunrise.

The details really aren’t all that important; the game cuts between past and present, with Babyface recounting his story to the cops in the present, and beating up the bad guys in the past. Midnight Fight Express is broken up into a bunch of small levels, each one taking you to a new environment, with new enemies to contend with and new weapons and objects to interact with.

One minute you’re hurling yourself onto the top of a speeding train, trying to avoid machine gun bullets spraying down on you from a helicopter, and the next you’re beating up a bunch of bruisers with a toilet plunger. All this while the heart-pumping synthwave soundtrack from Noisecream is pulsating through your speakers, egging you on, encouraging you to show off your moves and take down those criminals as quickly and as stylishly as you can.

Midnight Fight Express operates off of a scoring system, and it rewards players for being creative and diverse. The controls are pretty basic; press a button to punch, press another button to dodge. You can block and counter attacks by pushing a button at the right time, and then things start to get a bit more dynamic as you begin unlocking new skills.

Before you know it, you’ll be grappling enemies and following up with light attacks, or slamming them down to the ground for a powerful finisher. You’ll learn to break shields, and even pick up a gun on occasion to score some easy kills. The combat of Midnight Fight Express cannot be understated. Every punch and kick feels gnarly and visceral, but it’s also light, allowing players to swiftly dodge out of harm’s way without a moment’s hesitation.

The result is a hypnotic dance as Babyface zips from one enemy to another, unleashing light and heavy combos, and mixing in some weapon attacks in between. It becomes a rhythm game, as your punches inadvertently land in-sync with the beat of the music, and everything comes together to create a genuinely fun and exciting combat sequence you could rip right out of an action movie.

In between levels, you’ll have the chance to unlock more combat skills, as well as new outfit and appearance options for Babyface. Midnight Fight Express leans into the hip streetwear vibe pretty heavily, with hints of traditional martial arts garb sprinkled in there as well. For a game that’s all about the combat, I was pretty surprised to see how much depth and variety there was in character customization.

It’s a shame that you can’t pick between masculine and feminine body types, but with the sheer number of jackets, pants, shirts, shoes, gloves, hair, and tattoo options there are, I really can’t complain. Midnight Fight Express understands that if it’s going to be an action movie that you can play, the player needs to have a huge amount of control over how their main protagonist is going to look as well. I found myself looking forward to the breaks in between the levels, as I’d be able to spend all my hard-earned money (the higher your combat score in a level, the more money you get) on new threads to make Babyface look even cooler.

Then I’d hop into the next level, and just have a dumb smile on my face marveling at how cool and edgy Babyface looks with his suit and tie and neon blue hair. I’m shallow, I know.

The one issue with Midnight Fight Express –if you can even call it an issue– is that it’s over far too quickly. The game boasts a good number of levels, but they’re all extremely short and most people would probably be able to blow through it in a few days. After that, there’s little reason to go back and replay levels unless you’re looking to challenge yourself on higher difficulties, and therein lies the problem.

Midnight Fight Express isn’t all that fun on a higher difficulty, at least in my opinion. As someone who’s used to having i-frames in my dodge rolls, it was admittedly a little jarring to have an enemy ground stomp and hit me even though I dodged away at the perfect time. Babyface also takes way more damage and goes down very easily, which means that you need to be extremely precise with your actions. On higher levels, Midnight Fight Express demands a certain degree of precision and perfection, and in my view, that defeats the whole point of the game in the first place.

This is where the game becomes a bit more Hotline Miami, and loses its initial John Wick charm. Not everyone will be upset with this, of course, as I’m well aware that there are plenty of players out there who’d relish having the chance to challenge themselves even further once they’ve beaten the story, but it’s not for me.

That being said, Midnight Fight Express does also offer plenty of custom difficulty options for you to play around with, which might be appealing to those who aren’t quite ready to leave the game behind just yet. There’s a Playground mode with tons of options that let you tweak enemy AI behavior, including the kinds of weapons they’ll have available to them. If you ever wanted to direct your very own action movie scene, this is as close as it gets.

Midnight Fight Express wants you to be the actor, director, producer, and choreographer of your own action movie all at once, and it absolutely nails that aspect. As I made my way through the city, I found myself wishing the night would never end. But you know what they say, all good things must end and all that. At least I’ll always have neon blue hair Babyface.