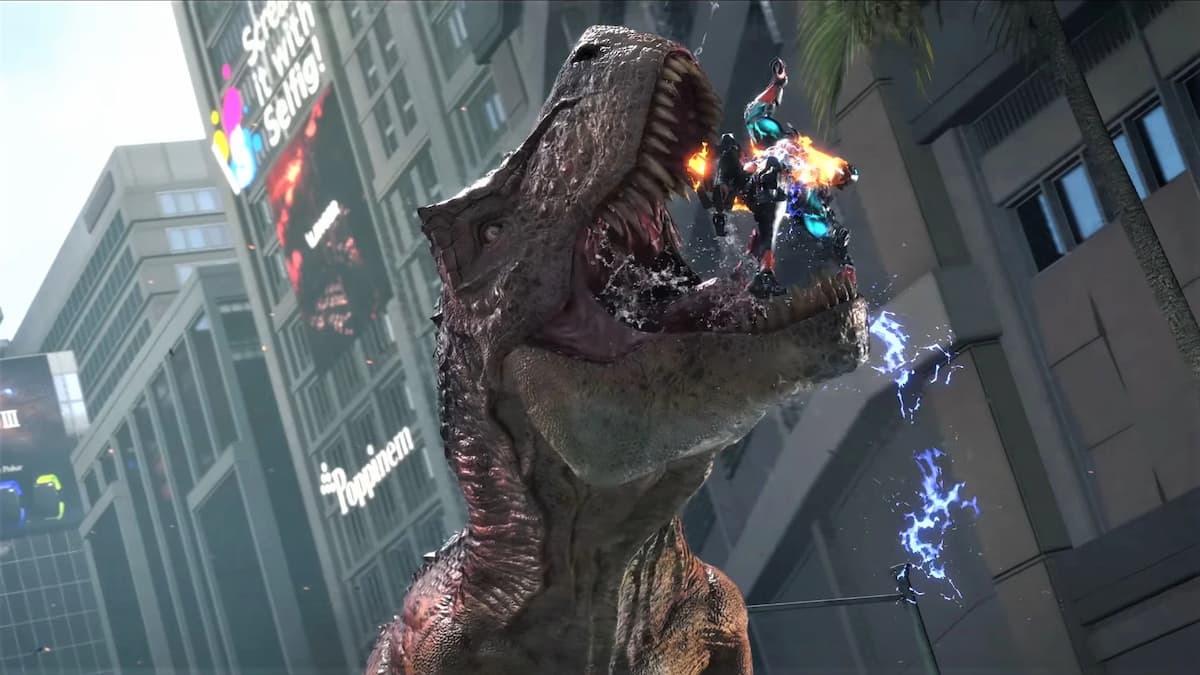 Capcom’s never been afraid to dive headfirst into cheesy territory, and Exoprimal is shaping up to be the latest example of just that. It’s not quite the tense survival horror experience Dino Crisis fans might’ve been hoping for, but the bones of the PvPvE gameplay in Exoprimal are solid enough for me to think that this game could have a lot of potential going forward.

Exoprimal isn’t shy about being self-aware, or letting players know right off the bat that they, too, know just how silly the entire premise is. It’s going to be cloudy this week, with a chance of dinosaur rain. And the game means that quite literally; dinosaurs drop from the skies to terrorize the world, and it’s up to you and your team of five to neutralize the threat.

The closed network test for July was extremely limited, only giving me the opportunity to check out one game mode, but it was plenty for me to see just what Capcom is going for here. The mode tasks players with completing a series of small objectives, and all of them involve killing dinosaurs. As soon as a match starts, teams will need to move together to kill a set number of raptors, protect a location from said raptors, or collect resources while killing raptors.

As time goes on, the dino variety gets more interesting as well. The regular raptors are everywhere, but eventually you’ll start facing pterodactyls and other bipedal monstrosities. Exoprimal seemed to be keeping its cards pretty close to the chest in this closed network test, as I would’ve definitely liked to see what other crazy dinos we’d be facing off against, but this will have to do for now.

I wasn’t left disappointed for too long, though, as the moment-to-moment combat in Exoprimal was enjoyable enough to keep me distracted. You’ll have access to a few different types of exo-suits that you can switch around mid-match, providing different gameplay styles for you to experiment with. They fall into the three usual categories: DPS, tank, and support. The Witchdoctor exo-suit lets you stun enemies in your vicinity, as well as heal up your teammates, while the Roadblock suit comes with the ability to summon a large, Reinhardt-like shield to generate aggro as your allies take care of the foes.

The DPS suits provided the most enjoyment by far, allowing players to swap between ranged or melee damage. The Zephyr suit turns Exoprimal into a Platinum Games-like action title, where you’re able to slash your way through raptors with a variety of blades at your disposal, while Deadeye makes the game feel more like a classic third-person shooter. Pick your poison; there are plenty of dinos to go around.

Exoprimal isn’t a pure PvE experience, however. As you make your way through the level, you’ll get occasional updates on how the enemy team is faring. They’re completing the same objectives as you, and the goal here is to complete them faster than the opposing team. Towards the end of a match, you’ll eventually face off against enemy players, and this is where things start to go downhill a little.

Simply put, fighting enemy players just isn’t quite as fun as fighting dinosaurs. Every so often, teams will have the opportunity to summon a player-controlled dinosaur to disrupt the other team’s progress, and that can be really chaotic and fun. But when things devolve into a regular PvP match between two teams to see who can click on heads faster while performing an escort mission, it starts to feel like Exoprimal has kinda lost sight of its original vision.

It’s a bit of a shame, especially considering that the rest of the mode is so damn fun. Watching hordes of raptors stomping around the city is seriously goofy (in a good way), and experimenting with different exo-suits to see which one suits your play-style best is such a good time. Each time I got to the end of the round and realized it was time for a PvP showdown, my heart sank. The PvP bits against the other team are the least inspiring part of Exoprimal, and I definitely hope we get more PvE-centric modes in the final release.

With all that out of the way, I’m curious to see how Exoprimal will fare in the long run. We know there will be even more dinosaurs and exo-suits to check out in the future, and if we do get more interesting game modes that revolve around the dinos themselves, this could turn out to be one of the more unique multiplayer games on the market.