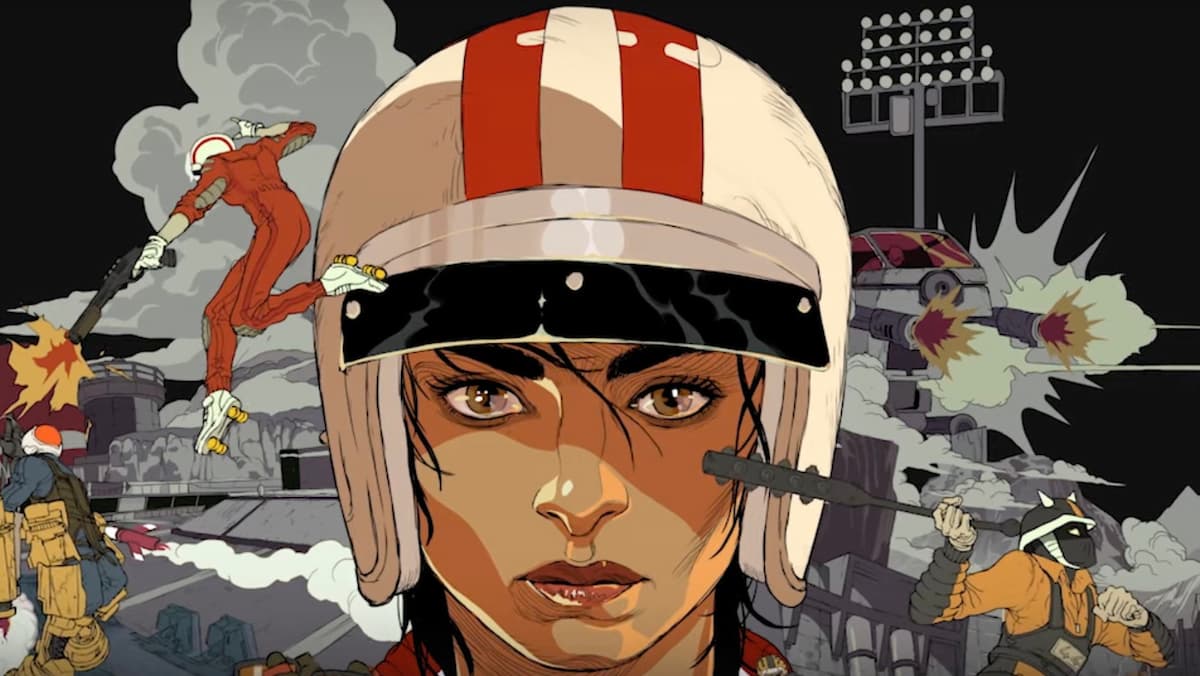 Skates are cool. That was my takeaway when 16-year-old me watched Whip It in theaters, grinning dumbly as Elliot Page and Kristen Wiig rammed into each other while skating around wildly in an arena. Rollerdrome takes things to the next level. This game is, like, forget that kiddy shit. We’re making roller derby actually deadly, and we’re going for more of a Hunger Games vibe than the grungy, teen emo stuff you see in Whip It.

I didn’t know much about Rollerdrome before I actually got my hands on the preview build, and I was certainly surprised to learn that it was from the same team that made the OlliOlli games. My colleague Andrew will tell you that OlliOlli World is a lighthearted, goofy game that celebrates skateboard culture with lots of fun customization options to make your experience feel distinct. Rollerdrome is nothing like that at all.

Instead, what we have here is a dystopian world set in 2030, where corporations have effectively ruled the world. In true Hunger Games spirit, the citizens –or the sheeple, if you will– have grown increasingly desensitized to violence, an issue that’s only exacerbated by the emergence of a new bloodsport: Rollerdrome.

In Rollerdrome, people put their skates on and enter an arena. It’s just like roller derby, except instead of trying to lap each other to score points, you’re, uh, shooting each other with firearms instead. Players take control of Kara Hassan, a new Rollerdrome contender who’s looking to make her way to the top of the game. Your job is to eliminate all other contestants, while pulling off cool tricks in the arena to impress the crowd.

Right off the bat, Rollerdrome feels immediately weird and stiff to play. Controlling Kara wasn’t quite as fluid or smooth as I initially expected, and she feels weighty on the skates. Once she gains momentum going in one direction, it takes time to steer her off-course, which means that you absolutely need to know where you’re headed from the start, and move accordingly.

Once you do get a hang of the controls and get things going, though, Rollerdrome is a dream. Kara’s movements start to feel lighter, and nothing beats the feeling of nailing a well-timed jump and grind. Rollerdrome is billed as a third-person shooter, but honestly, I could’ve spent hours just skating around the arena and I would’ve been satisfied.

But because this is a third-person shooter set in a dystopian future where people watch other people kill for fun, let’s talk about the combat. Each level tasks you with racking up points and killing a set number of opponents. While you’re skating around, you can use the right stick to look around and have Kara automatically start shooting at her nearest foe.

You can slow down time to make your shots more precise, and you can pull off perfect dodges to get those pesky snipers off your back. Each time you kill someone, you regain a bit of health, letting you go on for just a little longer. And when you run out of ammo, you refill it by doing cool tricks in the arena. Pipe grinds, wall rides, air spins… you name it. Pull off as many tricks as you can to reload your gun quickly, and get back to shooting.

Rollerdrome’s levels are easy to pass, but you’ll soon find that getting a high ranking in these levels is actually really challenging. The game will let you enjoy the story and conspiracy at your own pace, but it demands that you put in the time and effort to master its controls if you want to be the very best. Getting a top rank requires precision, and the ability to move from one trick to another seamlessly during a match. You need momentum and restraint, and those are qualities that will only come with practice and to those dedicated enough to learn.

I feel like I’ve only scraped the tip of the iceberg with the preview build, as Rollerdrome’s pretty good at keeping its cards close to the vest. The game’s distinctive art style and electric soundtrack help to craft a truly unique identity for this roller derby shooter, and I definitely can’t wait to see what else is in store. Skates have never looked cooler.