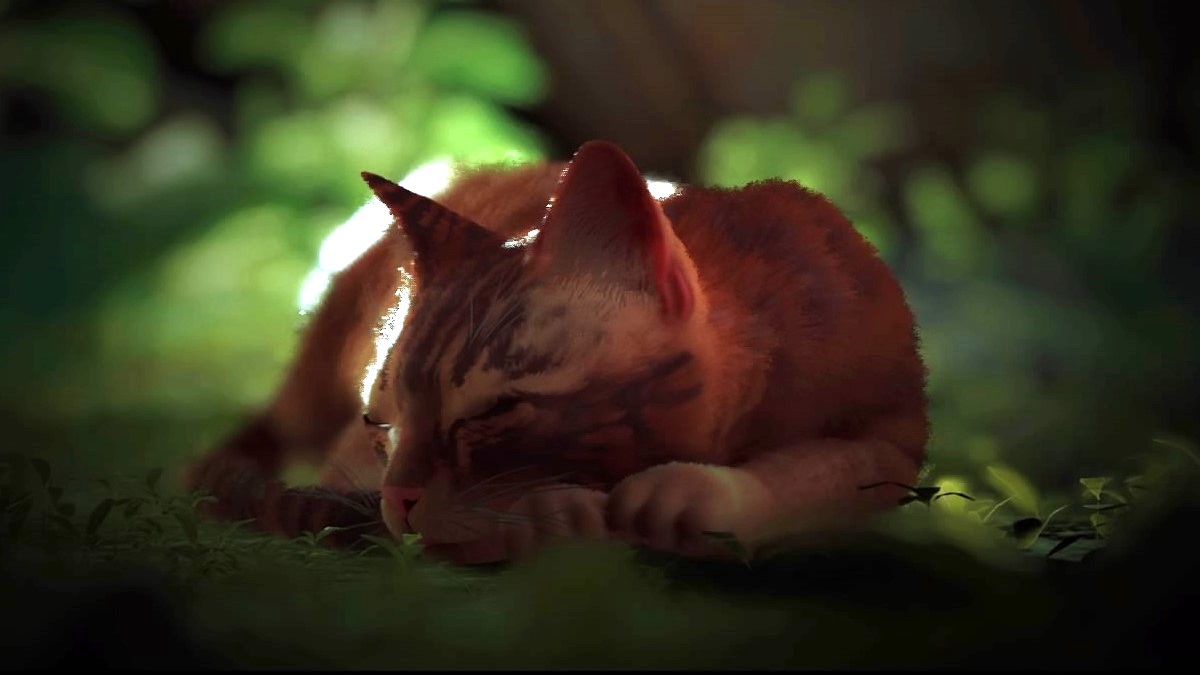 Live out your best feline life in Annapurna Interactive’s Stray, a game that features all your favorite animal characteristics. Without further ado, here’s a list of all the annoying (though some are adorable) cat things you can do in Stray.

Interacting with nearby feline friends is one of the first things you can do as a cat in Stray. For example, when you press the action button near the black cat, your character will start playing with the animal’s tail and then cuddle shortly after. The rest of the group does similar things like cleaning and rubbing against each other, just like real cats.

Those who are owners of this animal know that cats together often lead to play fights around the house, causing mischief and destruction wherever they go. But at least they make up for this annoying habit by adorably cuddling together, a reflection of what happens in Stray.

Unfortunately, the beginning is the only time you can partake in these adorable moments since your character lives out most of its adventure alone, hence the title of this game.

The cat parkour mechanics are Stray’s primary form of gameplay that maximizes the animalistic experience. Want to hop on a trash can? You can do that. Want to jump higher up? You can do that too. The possibilities of maneuvering around this cyber city are almost endless, and players will sometimes get lost in all of the area’s intricate ways of kitty transportation.

Because the character is so petite, you can even go into tiny buckets to travel vast distances and move the animal around in circles.

However, when you compare this gameplay to real life, you can see the annoying side of kitty parkour. For example, when objects around your house are broken and when they plant themselves in front of computer/TV screens (even when you are playing Stray.) The character in the game does the same type of scenario where it breaks whatever is in its way, reminding us of everything we lost thanks to our cute, cuddly companions.

Whether the character is on a bed, the ground, or a bookshelf, the cat of Stray can sleep in various places throughout its journey. All you need to do is press the designated button, and the adorable feline will begin to cuddle up and take a nice long nap. Furthermore, the camera angle will start to pan out, giving you time to take a screenshot wherever you are.

Cat owners know exactly what this animalistic habit is like because cats love to sleep in the most annoying ways, such as on top of your head while lying down or on your keyboard when working. However, in a horror aspect, it can be frightening when you are trying to grab a book off the shelf and get startled when you find your beloved feline there, similar to the cat’s hiding talents in Stray.

Although this specific mechanic doesn’t impact the storyline in any way, it adds a nice touch of capturing the essence of cats, animals known for sleeping.

One of the most annoying and hilarious things you do in Stray is breaking everything around the map. Those who own cats know full well about the destructive wrath of these cute animals, and this game utilizes this by allowing players to knock over anything they want. For example, if you see a neat stack of books, you can jump on top of it and make a mess all over the floor.

Players can unintentionally destroy objects like crates and boxes when walking in the cyber city. But, if you are feeling a bit more devious, you can choose to hit objects for no apparent reason, such as pushing a paint can over just because you feel like it.

A cat’s meow is possibly the most notable characteristic of the animal, and the game perfectly emphasizes this by letting players smash the ‘Meow’ button as many times as possible. Additionally, fans have claimed that they can’t help but do this mechanic because it’s so adorable to listen to and a genuinely fun experience.

The only frustrating part about this characteristic in real life is when your cat talks up a storm while on a phone call/meeting. Or when they look angry at you for not understanding what they want, as if you speak in their language.

At least with this game mechanic, you and your animal can have fun sounding off the cat’s meow, an experience that is certainly unique compared to most games. But, please, try to ensure that your TV is stable enough since you never know when your cat will suddenly attack the poor screen.

Stray has many cute and laughable moments, especially when you watch the cat’s reactions to specific locations around the city. For example, when you see a paper bag, you can put it on the animal’s head, resulting in a funny scene of it banging into anything while it walks.

Players can also do other hilarious things, such as messing around with billiard balls on a pool table, playing with a cat toy, and dunking a basketball. One, in particular, is an annoying scenario that the animal often does in real life, which is when the cat types gibberish on a keyboard.

We know that owning a cat can sometimes be infuriating, like when your boss sends you an email, and your feline plays secretary by replying back “ashfoihodshlovjohs.”

Since players have the opportunity to meow, it makes sense for the game to have a scratch feature available. For instance, while you are on top of a rug, you can scratch it to mark your character’s scent. At the same time, you can do this game technique on various things, including walls and a record in the NightClub.

Yes, you heard that right. The cat can be a successful entertainer at the club after you find and scratch the vinyl on the turntable, unlocking the Scratch trophy.

But, of course, scratching in real life isn’t as fun because things like your couch or carpet have a nice torn decoration shortly after.

Another annoying but cute tactic of Stray is the water drinking mechanic, an option players can initiate while exploring the map. Because animals are usually not picky about where they drink, this cat can do this anywhere as long as there is a puddle or a bucket of water.

As for animal owners, we are reminded of all the times we had to be quick on our feet when our feline companions drank the most random things outside. Even if drinking water from a puddle can be convenient, it crosses the line when bugs or other particles are swirling inside.

On the contrary, Stray takes a different turn when providing players with Energy Drinks inside multiple vending machines. By drinking this item, you can boost the speed of your character and get out of tight situations. Although a cat drinking an energy drink isn’t exactly realistic, this is a game about a cybernetic world, nonetheless.

The maneuvering of tight spaces around the map takes Stray’s kitty parkour to new heights. The cyber-beings also appreciate this talent and ask the cat to help them, like when Momo inquires you to go into a vent to talk to Seamus.

Cats in real life are known to get through these areas, and owners often find them in incredibly remote locations. Sometimes it can be cute, but there are times when it can become annoying, primarily when they come out of these tight spaces and scare you while you are peacefully at home.

The bond between humans and cats may not be present, but Stray makes up for this by showcasing multiple friendships with the robots. In this form of gameplay, you can snuggle up with cyber Grandma and collect musical scores for a lonely musician.

These portrayals mirror our hate/love cat relationships, like when the animal messes with a robot while working. In this part of the story, you will have the opportunity to repeatedly meow at a robot to distract it from handling paint cans. After you’ve done it enough, the item will eventually fall near a shop, causing the owner to yell, a relatable situation for all cat lovers.

However, cats in real life are just too adorable to stay mad at, and you’ll end up forgiving them whether you like it or not. The robots in the game also warm up to the character, no matter what annoying things it does. Moreover, if you maximize your relationship with the cyber-beings, you will earn the Cat’s Best Friend Trophy, solidifying the game’s strong bond between robots and animals.

Whichever way you want to play Stray, cat lovers will undoubtedly laugh at the game’s many annoying cat interactions. The overall experience is exceptionally adorable and makes you want to replay the story to have more fun with your real-life feline companions.