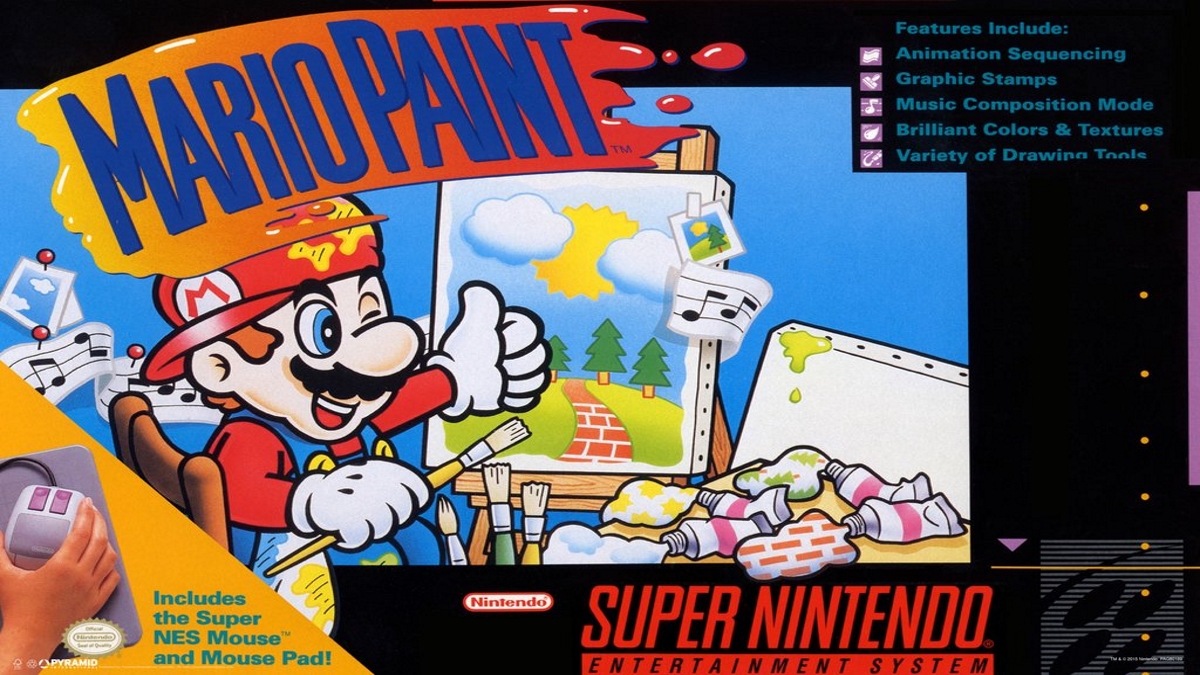 This month marks the 30th anniversary of one of the most glorious Mario spin-offs to ever exist, and that game is none other than the masterpiece that is Mario Paint. Most people think of platforming when they hear the name Mario, but this iconic hero has found himself in dozens of different spin-off games over the years.

Some of these spin-offs aren’t too out of the ordinary, such as racing in Mario Kart or sports like Mario Golf. But in Mario Paint, however, he plays the role of an art teacher. This isn’t the only odd role that the mustachioed plumber has found himself in over the years. Here are 10 of the weirdest Mario spin-off games to celebrate Mario Paint’s 30th anniversary.

When Mario wasn’t busy being a plumber or hero to princesses, he spent his time in the 90s teaching kids through educational games. Mario’s Time Machine was one of the earliest examples of this; it was first released for MS-DOS, then later for the NES and SNES.

Mario’s Time Machine was designed to teach kids all about history. In the game, Mario used a time machine called the Timulator to visit different eras in time to return ancient artifacts that were stolen by Bowser.

The player’s job was to answer questions about these different time periods in history in order to progress through the game.

Mario Is Missing! was another educational game that was released for MS-DOS, NES, and SNES around the same time as Mario’s Time Machine. This time, players assume the role of Luigi and must travel the world looking for Mario, who, as I’m sure you can guess by the title, is missing.

This game was actually the first time that Luigi would be the main playable protagonist, predating Luigi’s Mansion by nearly a decade.

In Mario Is Missing!, players learn about important cities in the world, such as New York City, Mexico City, London, Paris, Cairo, and more as Luigi travels to each of them looking for Mario. As Luigi arrives at each location, he must explore and talk to other characters to gather clues and figure out where he is.

If the above two games were too advanced for children, Mario’s Early Years! trilogy of educational games had the younger kids covered. This trilogy consisted of three games: Fun with Letters, Fun with Numbers, and Preschool Fun.

My own personal claim to fame is that I had a copy of Mario’s Early Years! Preschool Fun when I was a toddler, so that means I can officially say that Mario was my teacher, right?

Before Game Freak struck gold with Pokemon, the company was busy with other experimental titles, one of which was called Mario & Wario and was released exclusively in Japan. In order to play the game, players needed the Super Famicom Mouse accessory.

In Mario & Wario, players controlled Mario through levels as he held objects over his head. These objects obstructed his view, so players had to use the mouse accessory to lead him safely through various obstacles.

Impressively, the game featured 100 different levels, and for some reason, it was entirely in English despite never being localized outside of Japan.

I Am a Teacher: Super Mario Sweater

If you were a kid in the 80s and wanted to learn how to design sweaters, there was no better program to learn how than through the game I Am a Teacher: Super Mario Sweater.

Yes, this was actually a real game that was released in Japan on the Family Computer Disc System. Players could put in real measurement sizes and then design their very own sweater with pictures of Mario, Luigi, Peach, and Bowser.

The idea for I Am a Teacher: Super Mario Sweater came from a sewing company called Royal Industries that wanted to profit from the budding video game industry. Sadly, sewing simulator video games never took off, but surprisingly this wasn’t the only sewing Mario game, which we’ll touch back on later…

Mario Paint for the SNES was simply magical. The game came bundled with the SNES Mouse accessory and was designed to teach players how to use it.

There were also a large variety of mini-games and Easter eggs throughout the game that could be accessed by clicking things with the mouse accessory. Mario Paint was a quirky but charming and ambitious game that surely inspired many young artists.

Mario Teaches Typing was a CD-ROM computer game that was never released on consoles. As the title implies, Mario is back to being a teacher, this time instructing players on how to type on a keyboard.

In the game, players must correctly type the letters that appear on the screen throughout each lesson in order to make Mario run through the level. All of the music comes from the game Super Mario World, and this was the very first instance of Charles Martinet as the voice of Mario.

In the early 90s after a CD-ROM partnership agreement with Sony fell through, Nintendo licensed their Mario and Legend of Zelda franchises out to Royal Philips Electronics to develop four titles for the Philips CD-i console. The sole Mario game to come out of this deal was the one and only Hotel Mario.

For the unaware, the Nintendo games on the Philips CD-i were… not the best. They featured choppy animations, laughable voice acting, and boring gameplay. Hotel Mario is considered to be one of the worst Mario games of all time.

In Hotel Mario, players controlled Mario who explored seven different hotels in the Mushroom Kingdom to find Princess Toadstool. All of the doors in the hotel must be closed while avoiding enemies. Why hotels and closing doors, you might ask? Well… we don’t know, either.

If I had a nickel for every time a Mario sewing game was released, I would have two nickels—which isn’t a lot, but it’s weird that it happened twice.

This time, the game actually controlled a sewing machine. There were 32 total patterns to choose from, all of which were Mario-related designs, of course. It was meant to teach basic sewing skills while creating fun Mario designs.

Mario vs. Donkey Kong 2: March of the Minis

Unlike in the first game, instead of playing as Mario himself, you used the DS touch screen to control a bunch of mini Mario wind-up toys to rescue Pauline. Once every Mini Mario wind-up toy made it through the exit door to safety, the level was complete.

It was a bit odd because unlike Mario, these wind-up toys were unbothered by hazards such as spikes or pools of lava. This made it more of a puzzle game than an action platforming game since players had to figure out the best way to get all of the Mini Marios to the exit door.

All images courtesy of MobyGames.