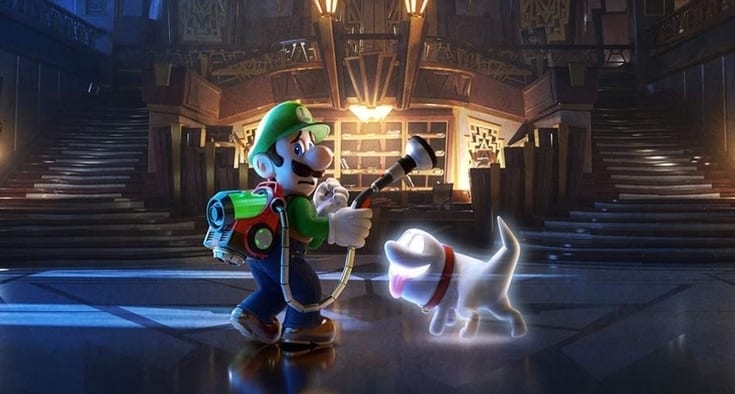 I was a bit scared going into Luigi’s Mansion 3, not because of the ghosts and dim lighting, but because I have seen what Next Level Games has done with the Luigi’s Mansion series before, and it wasn’t my cup of tea.

Luigi’s Mansion Dark Moon on the 3DS wasn’t the sequel to Luigi’s Mansion that I wanted. However, it’s safe to say that I was pleasantly surprised by what the devs have done with Luigi this time around, and the end result is a pretty charming and enjoyable adventure that never feels stale or that it’s going on for too long.

The premise of Luigi’s Mansion 3 revolves around the group being invited to a luxurious hotel to spend some much-deserved time away from the Mushroom Kingdom.

Luigi brings along Mario, Peach, a couple of Toads, and even Polterpup (his pet dog from Dark Moon.) The group soon discovers that everything is not as it seems and they end up becoming trapped in a painting, except for Luigi.

The game opens this all up with a series of super charming cutscenes at the beginning of the game and we even get to see Mario and Luigi say goodnight to each other –trust me, it’s the cutest thing I’ve ever seen.

Anyways, after they’re trapped, it’s up to Luigi and his trusty Poltergust G-00 to save the day, which involves finding all of the paintings scattered across this 15-floor hotel and defeating King Boo.

Each floor in the towering hotel has a very different theme to it with a different boss too. Some of the first few floors you’ll encounter deal with ancient pyramids, disco dance halls, dinosaurs exhibits, and even a pirate ship.

For the most part, each stage’s theme is done wonderfully well, with the entire floor feeling very distinct from the rest. Some of them fall flat, such as the bottom floor that gave me flashbacks to the water temple from Ocarina of Time –it was terrible.

But still, whenever I would collect an elevator button for the next floor, I was genuinely excited to see what would happen next and what the floor’s boss would be this time around and what kind of puzzles I would be solving, which is a big part of the game.

Pretty much every single object that you see onscreen at any given moment can be interacted with in some way. You can pull objects with a new plunger ability; you can suck and blow with the triggers; you can jump for the first time in the series, and you can use a dark light to find hidden items and enemies.

I feel like I spent hours of my 15-hour playthrough just simply searching for hidden goodies and money. It was such an enjoyable experience to enter a new floor and just start tearing things up to look for things.

There are hidden gems and secret ghosts on every floor so looking for them is really fun to do, even when you finish up the campaign.

As I mentioned before, puzzles are the main component in the game alongside the actual combat with ghosts and they’re so inventive and sometimes tricky.

Since Luigi has so many moves this time around, I was struggling at times to figure out how to find a gem or how to reach a certain area. I would try out every single ability and then become stumped but then I would come back later and my brain would come up with a solution that I couldn’t think of before.

You get those “AH-HA” moments a lot in Luigi’s Mansion 3 and because of the variety of the floors, the puzzles never feel samey or used or unoriginal… unlike the combat.

It’s Luigi’s Mansion as you remember it; you stun the ghosts by using the strobe light and then you go in for the kill with the vacuum and then you use the control stick to aim away from the ghost. Kind of like fishing.

What’s new this time around is Luigi’s Slam move, which allows him to slam around ghosts while they’re being sucked in, causing massive damage to them and even to other ghosts that you get in contact with.

It feels really good to slam them around like rag dolls, but this move feels very cheap and makes most combat situations less exciting and just really easy, especially compared to the tug-of-war ghosts fights in the first Luigi’s Mansion.

Ghosts can be defeated very easily and are not a threat, like at all. You also fight the same type of ghosts over and over again with little changes every now and again. Even so, I would have much preferred a bit of challenge here and there, and unfortunately, there is no changing the difficulty.

Now the bosses, on the other hand, are awesome and mixed with easy fights to really tough encounters. Each one has a “weakness” of some sort and the game won’t tell you what that is, leaving you to figure it out for yourself.

Some of these bosses are really easy to figure out while some of them can be way more tricky to beat. I absolutely adored a majority of them and they even led to some memorable encounters such as Luigi fighting a Kaiju monster and another that has him swimming in a pool with an inflatable duck –I can’t make this stuff up.

The bosses are all brimming with personality, which is something that Next Level Games is so good at. The devs have done a standup job at making Luigi an actual character and not just Mario’s younger brother.

He’s reacting with all kinds of different emotions and facial movements for a variety of situations, and even Mario himself feels more like a character this time around. I can’t spoil it for you all, but just know that I’ve never laughed so much at Mario and Luigi’s interactions before –it’s dope.

Next Level Games has done a fantastic job of giving Luigi fans a solid and highly entertaining sequel that is simply a joy to experience.

While the game plays safe and doesn’t push the series to exponential heights, it’s still a very good Luigi’s Mansion game that plays out as if it was some sort of Saturday morning cartoon.

The presentation is gorgeous, the game plays flawlessly (no frame rate or graphical issues), and the animation is just so well-done.

I was laughing the whole way through and once the end credits rolled around, I was thoroughly impressed and content with what the game had to offer me.

There are some shortcomings here and there but if you are a die-hard Luigi’s Mansion fan, you will adore this game. Heck, even if you’ve never played a game in the series and you own a Switch, do yourself a favor and check this one out.

Should You Buy Luigi’s Mansion 3?

Absolutely! Especially if you’ve been keeping up with the franchise since the GameCube days.

Who Is Luigi’s Mansion 3’s Developer?