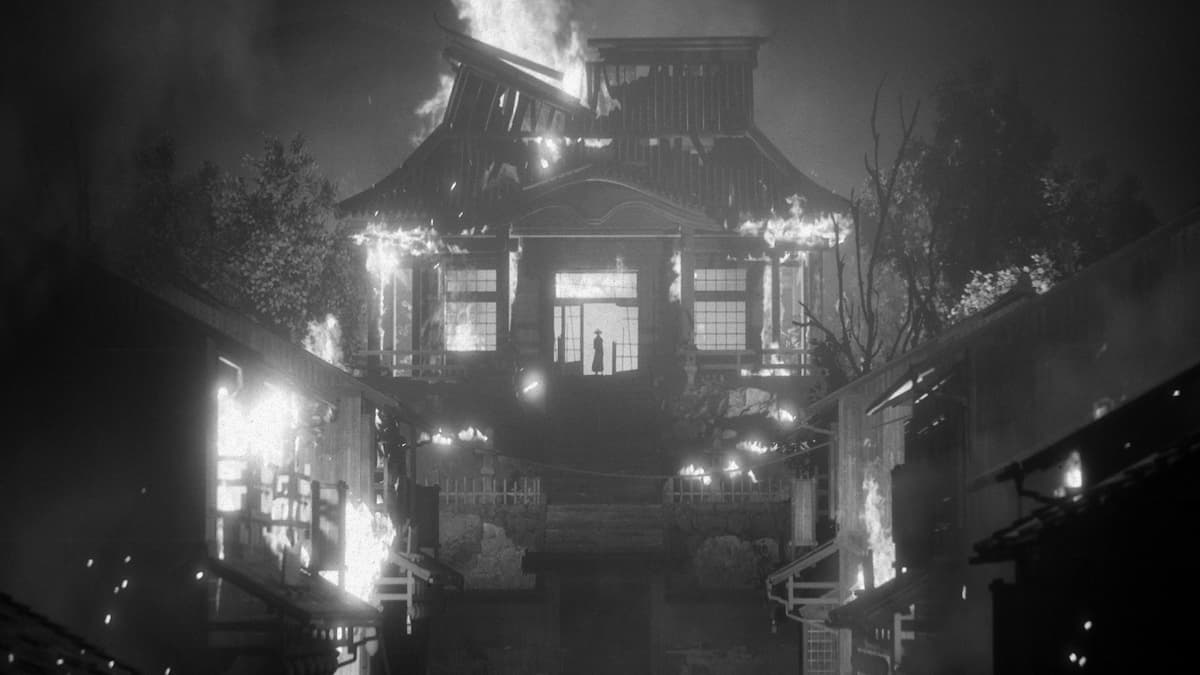 Trek to Yomi on PC

Trek to Yomi brought me moments of sheer joy and deep-seated frustration, all wrapped up in its cinematic art style inspired by the Japanese movies of the 50s and 60s. After playing through the game for about 7-8 hours and having completed two playthroughs, I was left with one word to sum up my experience — inconsistency.

Developers Leonard Menchiari and Flying Wild Hog’s artistic samurai tale follows the story of Hiroki as he embarks on a quest for vengeance after bandit-turned-warlord Kagerou and his band of not-so-merry men invades his hometown, butchering the citizens and burning the place to the ground. With his master killed and beloved Aiko nowhere to be seen, Hiroki embarks on an adventure to hunt down Kagerou and prevent him from unleashing chaos on another unsuspecting town ever again.

This narrative lends itself well to the flow of taking you through many beautiful landscapes, and at times, Hiroki’s adventure was visually stunning. I still remember clambering my way to the top of a building and looking out over a bay soaked in the glow of the full moon hanging in the sky. The beauty of Trek to Yomi’s environments are often juxtaposed by the sheer brutality of the combat taking place in the foreground, as Hiroki hacks and slashes his way through countless bandits, each swing of his samurai punctuated by the spray of blood or the final cries and whimpers of the felled enemy.

What isn’t so great, however, is how throwaway this narrative can feel. Trek to Yomi feels like a game aiming for a minimalist approach in order to elevate the often excellent elements that are there. As someone who admittedly doesn’t know a whole lot about Japanese culture and folklore, some of the plot points and locales I found myself traversing with Hiroki went over my head, because the game doesn’t do a great job of explaining it until after the fact.

There’s a journal tucked away in the menu that provides further detail, and some segments of dialogue do eventually elaborate on where you’ve been or what you’ve done, but you could find yourself a little disconnected from the narrative for significant chunks of time until these occur. Or unless you read the journal frequently.

That being said, the story here does enough to provide some context for all the samurai-swinging action that makes up the meat of the gameplay experience. There are some ‘choices’ players can make, but they barely change the outcome of the story or even the dialogue that immediately follows. You’ll just see some different, brief cutscenes instead. Hardly an excuse to play through the entire game again due to a lack of a chapter select feature.

What is rather impressive, though, is how Trek to Yomi manages to encapsulate the true horror of the invasion, of the depressing reality of war and how despite thinking our protagonist was on ‘the right side’ of the war, everyone’s equally as guilty of taking part in the gruesome slaughter of others. The cries and screams of felled enemies often drowns out the beautiful soundtrack, yet another instance of the aforementioned juxtaposition that Trek to Yomi manages to instil.

Trek to Yomi’s primary focus is on the cinematic combat that Hiroki finds himself frequently at the heart of. As you progress through the game, you’ll learn new combos which, when chained together, can make for some really satisfying kills. But you never really need to use them. I often found parrying and then pressing Y a couple times to perform back-to-back heavy attacks enough to dispatch most enemies. This was on the game’s ‘Normal’ difficulty, though things did ramp up a little when playing on the tougher ‘Ronin’ or ‘Hard’ difficulty.

Unfortunately, it’s in the combat where the inconsistency felt particularly prominent. At times, I’d encounter enemies I could slash through with one or two strikes. In others, they’d take eight, nine, sometimes 10 strikes to slump to their knees and keel over. Similarly, the game has a ‘Finisher’ move that can be used when an enemy is staggered, but I found it very hit and miss as to whether combos that should stagger an enemy actually worked, reducing the opportunities I had to make use of these stylish, gory attacks.

It doesn’t end there. Enemies don’t always react to your attacks, seemingly unaffected by a flurry of swipes and slashes with a samurai, only to unleash their own powerful strike while you’re mid-combo. Again, this sometimes happens, sometimes it doesn’t. Combos sometimes work, other times they resulted in me performing an entirely different move unintentionally, resulting in a death. The game also appears to want you to enter combos at a slower speed than you’ll likely want to in the heat of combat surrounded by enemies. It’s a bit jarring and again results in inconsistently executing combos and other times flailing around, opening you up to enemy counters.

Enemy attacks sometimes caused minimal damage, other times they’d wipe out my health in one fell swoop on ‘Normal’ difficulty. And for one section of the game, enemies could perform some weird charge/ bubble shield move where if you attack them, you’ll just kill yourself. There’s no explanation of what this is or that you shouldn’t hit them with melee attacks, you’re just expected to learn that ranged attacks are the only way to go here. During my second playthrough on ‘Easy’ to check out the different endings, this didn’t seem to deal damage, though, so it may be difficulty dependent.

Having discovered that parrying was the best way to approach tougher combat sections, I then found that your defense and best form of attack was also susceptible to inconsistency. Holding LB causes you to block, while pressing LB as an enemy swings their weapon will perform a parry. However, when pressing LB to parry, the game would just ignore it entirely, and other times I’d go to hold LB only for Hiroki to perform a parry anyway. I determined this was a result of the response window for parrying being too wide, at least on the Normal difficulty, but this, alongside the various other instances of inconsistency, tarnished an otherwise satisfying samurai slasher.

The good news is that, when Trek to Yomi’s combat does work, it leaves you feeling like a true master of the blade, particularly when you successfully pull off a series of combos to devastating effect. And when the inconsistency does rear its head, or you just succumb to the overwhelming number of enemies in the ‘arena’ combat sections, I was thrown back into the action in a matter of seconds from the last checkpoint you reached (which also restore your health when interacted with).

Unfortunately, these checkpoints suffer from yep, you guessed it, inconsistency. In some levels you’ll find two or three within a few minutes of one another with little to no combat in between them. In others you’ll go through a challenging gauntlet of combat encounters without any in sight, only to die and then be forced to repeat the same five minutes over and over until you crack it.

Despite only being about five to six hours in length, Trek to Yomi’s gameplay feels stretched too thin, primarily because there’s little variety in the gameplay outside of running through its beautiful environments to the next combat scenario. There are some hidden areas that contain collectibles or health and stamina upgrades, and there’s the occasional basic puzzle blocking your way in one or two of the game’s seven chapters, but they’re fleeting and require little more than looking around your surroundings for symbols and entering them into a rotating dial.

Trek to Yomi feels like a victim of its own cinematic inspirations and artistic ambitions. While satisfying at times, the combat is ultimately pretty one-note and begins to outstay its welcome by the time you’ve reached the end of Hiroki’s journey. I’m a sucker for artistically driven indie experiences, but there’s got to be some strong gameplay forming a foundation for it, and I can’t say I overly enjoyed my time accompanying Hiroki on his quest for vengeance.