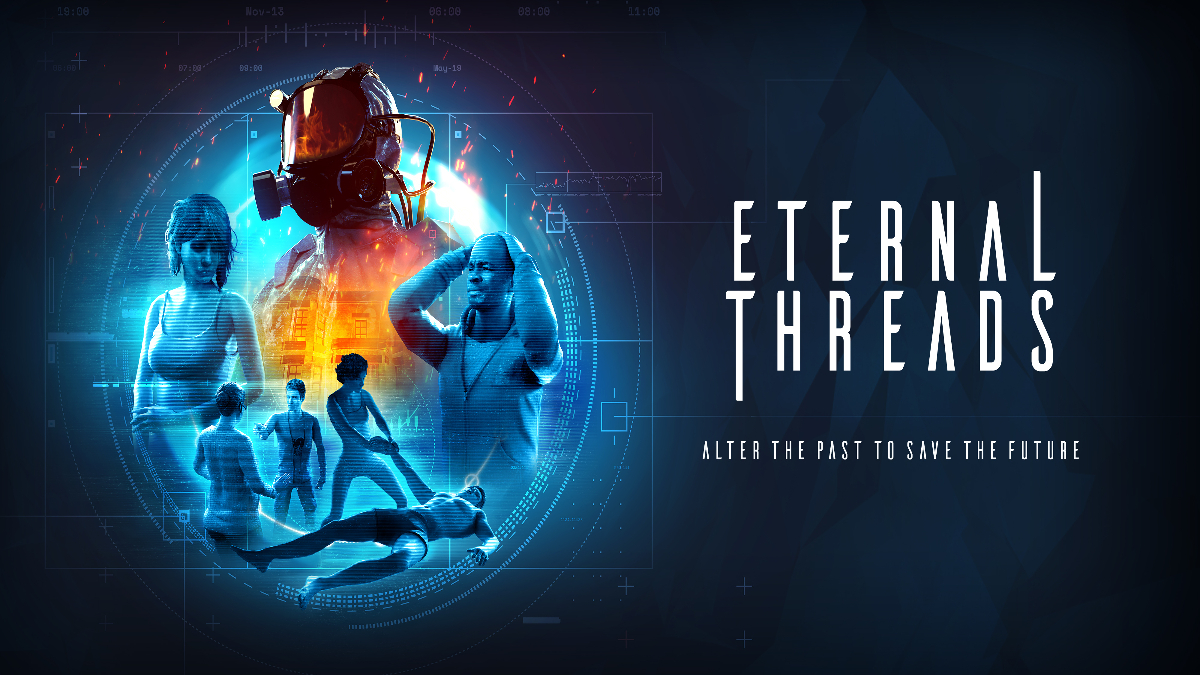 Developed by Cosmonaut Studios and published under Secret Mode, Eternal Threads is a first-person story-driven puzzle game of time manipulation, choice, and consequences. You play as Operator 43, a newly qualified time-traveling operative working for the Second Chance Project: a task force dedicated to fixing corruption in the past and restoring the proper timeline.

43’s first assignment takes you to May 2015 in Northern England, focused on manipulating time to save six residents who died during an unfortunate house fire. By changing the decisions of the housemates a week before the fire happens, you can avert their deaths and get to the bottom of the accident.

After being transported from the Second Chance Project headquarters by your trusted guide known as Control, you arrive at the ruined England home and start using the Visualizer. While using it, I couldn’t help but think about Alien: Isolation because of how it looks, and it effectively works the same way as Ripley’s navigator but has time-bending features.

It tracks time nodes from your Time Map, a linear thread of memories between the roommates around the house, and lets you select a node of your choice to watch a holographic scene. The rooms in the three-storied home you can get to at first will be limited but slowly open up to you as you work your way down the Time Map and discover keys around the house.

Designing locked doors was a great decision because it helps break up the linearity of just watching cutscenes and encourages the player to search for clues around the house while getting acquainted with the residents through personal items in their rooms.

But a cool thing about the Time Map is that you can freely move and view a scene on any day at the start of the game – unless it’s behind a locked door. It was a bit daunting at first since there were over 200 events to watch, so I decided to focus on the first node and go down the line at my own pace. I’d argue this approach works best because stepping into later scenes without context was awkward, but I like that the developers give players the freedom to choose.

Additionally, you can automatically sort through all the nodes by character involvement, quickly jump to different days, and slide between memories tied to decisions when backtracking. It won’t take long for you to get familiar as your hopping between being a spectator and choosing your next scene back-to-back.

And thankfully, it’s easy to rewatch old scenes and remake decisions on the fly from the Time Map, showing a ripple effect of your new choice yet maintaining the progress on the old route in case you switch back – saving needless time backtracking through nodes.

However, the meat and potatoes of Eternal Threads boil down to the interactions between the game’s authentic characters, modeled very closely to actual people you could see yourself rooming with through university or in the middling years of your life. There’s the landlord Tom with an ill mother he looks after, the stressed-out doctor Ben looking for a lucky break in his young career, and the temporary tenant Linda escaping her life as an older wife to figure out her future, to name a few.

The story revolves around figuring out their problems and eventually pairing them with other characters who help them get past what’s holding them down. For example, another member of the house and my favorite of the bunch, Raquel, is a quirky college girl with a knack for painting and photography but blames herself for her best friend dying when she was younger. Going through conversations from different days will slowly peel back why she believes that.

Operator 43 can then choose between the current or alternate timeline to make characters like the motherly Linda probe Raquel about her past, unlocking a crucial time node from your decisions that’ll allow Raquel to come to terms with her trauma. Through this process, all characters will survive; however, there are trickier scenarios like Ben and his partner Jenny, who is desperately missing her dead mother, and require a bit of tampering throughout the timeline to make sure both get out alive.

These impactful turnabout memories between a pair of characters carry the momentum of Eternal Threads from start to finish. Before long, players will care about bringing closure to their stressful circumstances because of those scenes and get sucked into the mysterious secrets each character hides from each other. Yet unfortunately, I have some gripes with the game that knocks the gameplay down to a dull experience after the first hour and a few design choices that missed the mark and broke my immersion.

Because Eternal Threads is a narrative-driven game, there are cutscenes everywhere. They can be back-to-back slogs sometimes with nothing in-between to do but watch. On the flip side, the game is relatively short (5+ hours) if you’re not interested in getting the best ending, but it can be tiresome and boring.

Then, running around the house to locate your chosen time node gets old fast. Trekking up and down the same stairs doesn’t feel exciting when you know you’re zipping back up for a short scene and straight down to the basement afterward for another. Outside of the occasional deep or tense conversation, Eternal Threads can become task-y and dependent on those involved character moments to carry players to the end.

Within the opening hours, players can understand that Eternal Threads is more about sitting in corners or hallways to hear/see the dialogue between holograms; and I wish the Visualizer device could remake the scene entirely instead of projecting the characters. For instance, recreating the scene reshapes the environment and makes character models reflect how they would look at that time instead of being holograms. I couldn’t help but feel a bit disconnected from what I was watching when they were opening doors not there or clipping through the bedding.

The last bit of the game is where puzzle-solving comes into play. For most of the Eternal Threads, it takes a backseat; lightly paced throughout but becomes the focus once you have to backtrack through the time nodes to save everyone. I didn’t enjoy how there weren’t any other puzzle concepts introduced to spice things up gameplay-wise. I feel like there was an opportunity to corrupt or make scenes unviewable until the player does a short minigame or discovers an item around the house to proceed with the story.

Eternal Threads is still a solid game, though. I commend the writing team for nailing the characters’ behaviors and how they all balance each other. Moreover, the time manipulation mechanics are easy to use and not complicated to sift through for specific events. But it does falter in the gameplay department a bit, becoming repetitive and not all that engaging outside of opening the occasional locked door. 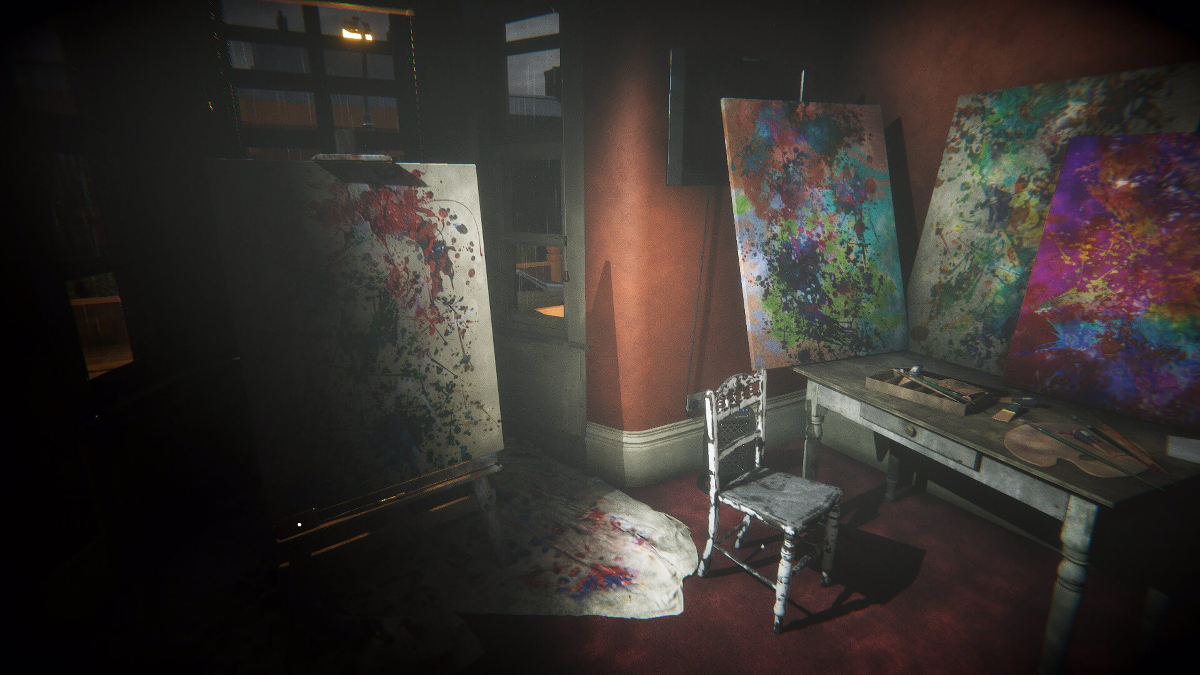