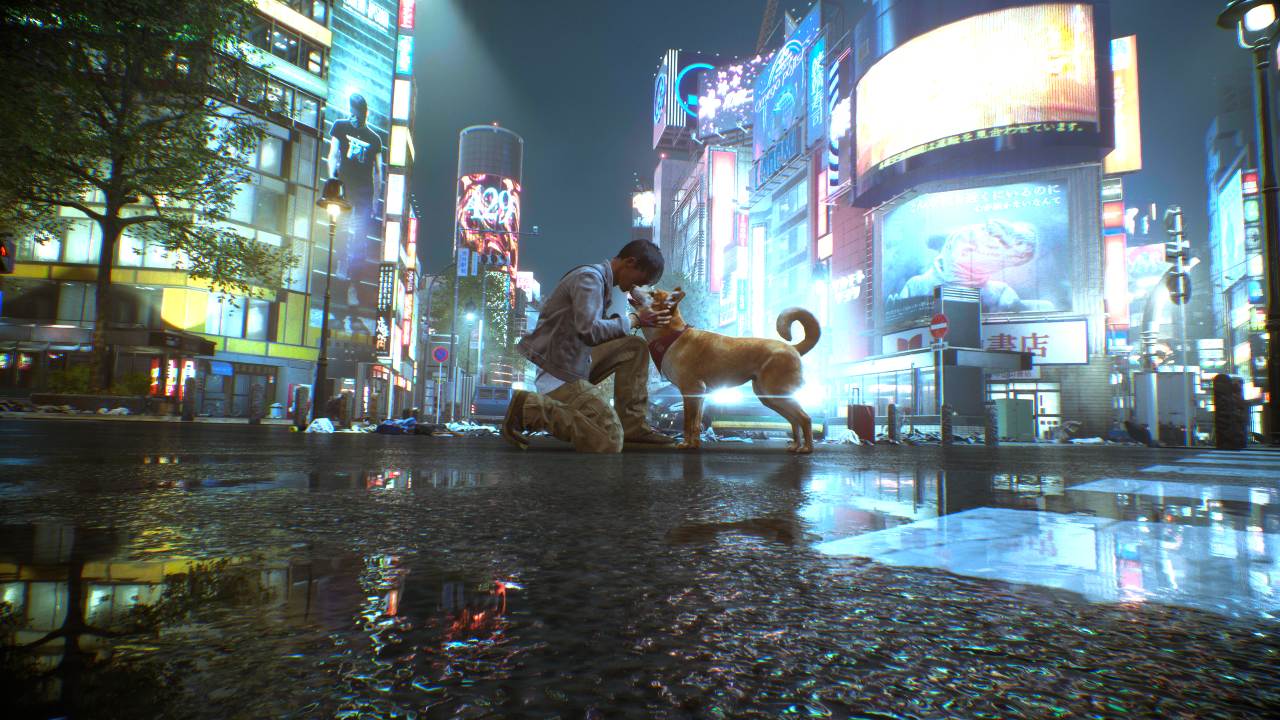 Ghostwire Tokyo is a brand new IP created by Tango Gameworks, telling the story of a young man named Akito and a spirit hunter turned spirit, KK. Despite the awkward situation of sharing one body, these two must come together to stop enemy specters known as Visitors from taking over the world.

To do so, the pair explore an abandoned, but surprisingly lively, version of Tokyo, completing missions and defeating evil spirits while helping good ones along the way. I recently experienced the game firsthand and sat down with Game Director Kenji Kimura and Producer Masato Kimura to get a little more information regarding the game’s development.

Many thanks to both for taking the time to talk, as well as Bethesda Producer Tayuki Horiay for providing a translation.

Andrew: Why did you decide to pair Akito up with KK?

Kenji Kimura: There is this theme in the game in regards to entities that exist in this world that you cannot see, but are nearby. One of the main concepts of the game was to allow the player to experience the unordinary that was lurking within the ordinary.

So we were considering making the story be about a young man who has no normal powers that meets a senpai Ghost Hunter, an older guy that acts like a mentor. They clash a little bit in the beginning, but as the relationship opens up, they come to realize the importance and need for each other.

The choice to make it two people is also symbolic to real life. There are a lot of things you can do, but there are even more things that can be done with two people or the help of others.

It’s a lot like game development. There are things that I can do, but I can’t do everything without the help of others

Andrew: I’ve heard Ghostwire: Tokyo was originally planned to be The Evil Within 3. If so, why did that change, and how much did the Evil Within series help you craft the new game?

Kenji Kimura: Yes, that is true. The switch happened very early. We changed the setting and chose to use Tokyo, Japan, and it was so vastly different we probably should call it something else because it isn’t going to feel or look like The Evil Within.

We kind of have a vision for the studio overall just to make new and complete game experiences that make gamers say, “wow.” As such, we don’t want to limit anything to a specific genre and don’t like to limit the creativity of the staff, so it wasn’t necessary to stay just within that franchise.

In regards to what we learned from The Evil Within for Ghostwire: Tokyo, it is kind of hard to answer that because the game genre is so different. The Evil Within 3 idea was more of a survival horror, and this game is an action-adventure.

The thing is that the team is mainly the same people, and so the chemistry that was built has been brought over, and the way the relationships have matured resulted in a trust that would have been difficult if the team was new. It’s also a totally different new engine, so there are a lot of differences there, too.

Masato Kimura: Talking a little more about the studio, in the beginning, it was a group of people that hadn’t really worked with each other much yet, but through the two games and DLCs, we were able to mature as a team. The people that we have now have a good relationship with each other and are able to make something fresh and new.

This is the first new franchise [outside of The Evil Within] we’ve been able to make, and we’re happy so far.

Andrew: Culture and folklore clearly play a huge role in the ambiance and setting of Ghostwire: Tokyo. Can you go a little more in-depth regarding why you chose specific designs and themes when it comes to the enemies, landscape, and spirits that you run into while playing the game?

Kenji Kimura: One of the biggest inspirations that we had were the urban legends that occurred and heard about when we were children. Japanese urban legends aren’t that horrific in the sense that they aren’t stories about monsters jumping out of the darkness and attacking.

So there is that creepiness and spookiness that just lingers with you. There’s a sense of coldness that creeps up your spine as you start noticing these things. We wanted to bring that kind of feeling to the game.

You’ll notice that being used in enemy designs. You’ll ask, “Is this a human? It looks like a human.” You walk closer, and it doesn’t seem to have legs. If you get even closer, you’ll realize it doesn’t have a face or something like that.

You’ll see a lot of that kind of inspiration being used in our designs for a lot of things. At first glance, it looks normal, but the more aware you get, you find out there is something off. That goes back to that original vision of wanting to make the experience of the unordinary lurking within the ordinary.

Masato Kimura: On the landscape side of things, the team asked to walk around Tokyo so we could do research and pick up the cool things about we think that gamers would be interested in. We walked around and came back, and the list ended up not just being touristy things you’d see in the guidebooks about Tokyo but also interesting parts that you may not notice as a sightseer.

So we were able to take a whole bunch of neighborhoods and condense them together, and also augment some of the features to make them more noticeable and highlight why they are so significant. We stitched them closer to the Shibuya station.

By doing so, we created this paranormal Tokyo that is original to Ghostwire. The city itself is already very interesting because of the way it mixes traditional and Japanese history and elements from the culture with modern-day stuff.

It’s a very appealing city, and it shows in the landscape.

Andrew: I’ve really enjoyed the side story content so far in the game. How important do you think it is for players to experience this content alongside the main story? What is your favorite side mission in the game?

Kenji Kimura: The side missions are supplemental to the main story and involve a lot of mini-stories that have to do with Yokai. Sometimes they offer different views of what is going on in the main storyline, but those aren’t important to understand the main story.

You can play all the way through the main game without doing any of the side missions. They are also there for you to enjoy at your own pace. If you want to take a break from them, then we made it so that you could always come back.

As the developers, we obviously want everyone to play through all of the side missions, as we’ve put a lot of love into them, but it’s not absolutely necessary.

In regards to my favorite one, that is tough. When I think back to the ones we worked on a lot, though, I think about the bathhouse.

In this mission, there is a bathhouse that is haunted. There has always been this notion in Japanese history that water can be holy and can be purified but that it can also be evil. So this location that has a lot of water may be an entrance to another world, and we were able to capture the spirit of that in that quest.

Andrew: Did you find any influence in any other medium when crafting the game’s world and narrative? Any specific games, manga, or anime that inspired you?

Kenji Kimura: We are showered with a lot of different forms of entertainment in Japan that can be used regarding themes about Yokai. There is a manga called GeGeGe no Kitaro that was also turned into an anime that was on tv all the time.

That had a strong influence on me because it popularized this notion that these Yokai could exist and that they might be near us, as we just can’t see them. I’m sure that has influenced not just me but a lot of people on the team.

Another form of medium would be a movie called Tomorrow World, also known as Children of Men in English. It’s a movie that didn’t explain too much but still set a tone and atmosphere that was really well done.

Andrew: What would you say to someone that has never played a Tango Gameworks title before but is interested in starting with Tokyo: Ghostwire?

Kenji Kimura: This is a game where you can visit a paranormal Tokyo and go sightseeing. You can enjoy it in a very casual way to ease some stress and just have fun. It is not scary.

While I might not agree with the “not being scary” part of that, I’ve can attest to just how scenic and amazing the sites that makeup Ghostwire: Tokyo truly are. Don’t simply take my word for it, though, as you can experience the game for yourself when it releases for PC and PS5 on March 25, 2022.