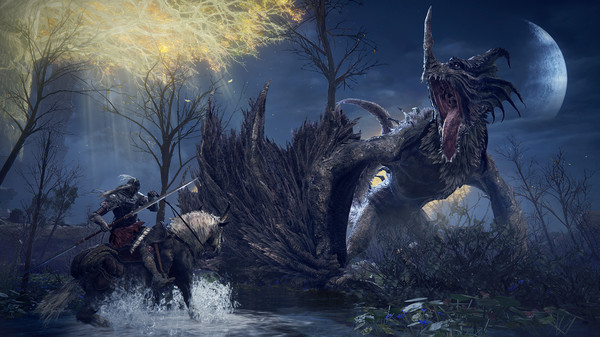 One of the things that I learned about Elden Ring very early on came to me during the closed network test. This epiphany didn’t hit me until a few boss battles after repeatedly banging my head against the wall that was Margit, the Fell Omen.

After hours of struggling against an early main story boss, the smaller ones helped me realize that their purpose goes beyond being secrets to discover. In fact, they’re more like warmups for the bigger battles. And that’s exactly why these smaller bosses are a great way for newer players to get accustomed to the controls and overall movement speed.

One of the best examples of a fight that teaches the basics of Elden Ring bosses is the battle against the Mad Pumpkin Head in the Waypoint Ruins cellar. This boss battle happens in a small enclosed arena that forces you to learn how to dodge roll, block, parry, and figure out weaknesses on the fly. Mad Pumpkin Head has a giant pumpkin-shaped helm that blocks most physical and magical attacks from the front. You quickly learn to time dodges properly and how to adjust your approach to combat on the fly.

Most importantly, the Mad Pumpkin Head boss fight and the other small bosses are some of the most forgiving battles in Elden Ring. One of this boss’ most damaging attacks is a massive stomp where he also slams the ground with his giant helm. It definitely won’t kill you if you keep your HP up and there’s just enough cooldown on the attack animation to let you get up and heal if knocked down. What’s more, his very few weapon attacks have extremely obvious tells that give you plenty of time to dodge roll behind him or parry for two or three big hits.

Soulsborne games aren’t known for giving players a lot of room for error, so this boss and others like it are a welcoming intro for people who ran into the skill gates of past games. These minor side bosses give starting players a way to build confidence and earn bunches of runes for leveling up and becoming strong enough to take on the more difficult bosses.

Additionally, the small bosses that have their own arenas specifically are a bigger help than just exploring the world or grinding for Runes. Battles against enemies in the open world just let you hop on Torrent and live to fight another day. Plus, many of them can be killed too quickly to truly pose a threat.

Some may view these bosses as detrimental for a beginner because they might become a bit lax with blocking or dodging. However, giving new players relatively safe battles that lay a foundation of fundamentals increases the likelihood that they’ll be able to build upon them down the line. In comparison, past Soulsborne games had identifiable walls or early bosses that threw you into the fire (literally) too early.

You’ll hear no disagreement from me that part of what makes Soulsborne games so enjoyable is the feeling of triumph after slaying an especially difficult boss. But if you can throw a few easy bosses into the mix for other players to get the hang of things, then there’s no harm done. Plus, more people will get to fully enjoy what is likely to be a top contender for Game of the Year.