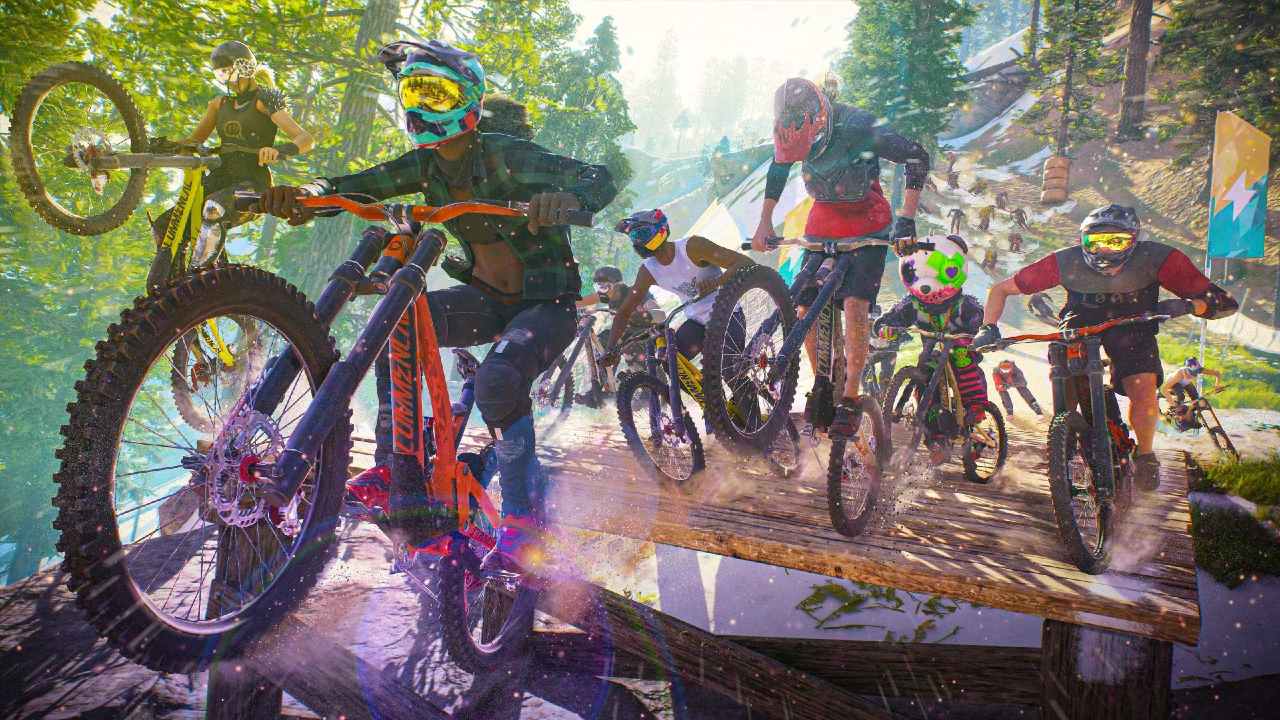 Extreme sports have always been my jam. Whether it was playing video games like SSX Trickey, Tony Hawk’s Pro Skater, and Skate or the brief period I lived in Park City snowboarding the day away, I can never say no to the adrenaline rush that comes alongside experiencing these crazy activities. So when I saw the chaos that was Ubisoft’s Riders Republic, I knew I had to give it a go.

Not too long after the tutorial section of Riders Republic, which only takes an hour if you aren’t exploring, the game opens its chaotic floodgates. Instead of hiding all of its extreme sports behind hours of progression, everything from skis to bikes to wingsuits are unlocked pretty quickly. This is accomplished by going from one event to another, unlocking new gear, equipment, sports, and activities as a result.

There is plenty of event variety for each sport as well. For example: where one bike riding event focuses on winning first place, another event emphasises pulling off the best tricks. This event variation is the same for all the other sports, with some fantastic activities that include strapping rockets to your skis or glider to make for a fun, fast-paced experience.

Making it so the entire mountain is available from the get-go is also fantastic, as it allows players to explore the amazingly detailed replicas of real-life locations at their leisure. I’m not ashamed to admit that I spent plenty of time just taking in the sights and comparing them to what I’ve seen in person.

Yet, while I do love the mostly hands-off approach to the game’s open world, I was more than a little disappointed with the lack of a structured story or career mode in Riders Republic.

Yes, there are sort of mentors that’ll show you the ropes and give you exposition, but they are written so poorly I couldn’t bear listening to them whenever they came on. The commentary is so bad that it all just comes across as “how are you doing, fellow kids,” using lines of dialogue like “holy shiz wizzle” that really just hurt to hear.

After tuning out all the badly written caricatures, though, I started to enjoy myself a lot more. It is hard to explain how fun it is to deftly pilot a jetpack or glide around the mountain until you’ve experienced it for yourself in Riders Republic.

I also loved hopping into first-person and racing downhill on bikes, as it felt like I was living out one of those insane go-pro videos – and all without the risk of injuring myself, to boot. And while I’m not someone who is that into multiplayer, there is no denying that Riders Republic has a really great ambiance for it.

Whether I was just cruising around with friends or competing in chaotic 64-person triathlon events, there were so many moments where it was fun to revel in the chaos. The biggest problem is that I’d usually be taken right out of that chaotic fun due to the game’s controls.

While better than Ubisoft’s last extreme sports title, Steep, I found myself frustrated by how often the controls in Riders Republic felt unresponsive or stiff. Whether I was trying to pull off a trick – or simply move in an effective manner mid-race – there were a lot of instances where the game didn’t register inputs smoothly. It feels like Ubisoft got stuck between wanting to make the game extreme while also going for realism.

I don’t necessarily think that realism is bad in extreme sports games, it just needs to be done right. The entire atmosphere of Riders Republic is all about being crazy and extreme, so every time the game went for a realistic approach to gameplay, it stuck out like a sore thumb.

The game is at its best when it is launching your character off an insanely large drop that would probably cripple someone in real life. That is why it is so hard to fathom why Ubisoft didn’t just completely lean into that when it comes to its controls.

I keep picturing how much I would’ve enjoyed the game even more if it managed to throw in gameplay that is similar to SSX Tricky, allowing players to pull off insanely unrealistic combos. Instead, Riders Republic throws in a handful of crazy moves while also requiring players to factor in things like rotation and landing timing.

Despite my gripes, I do think that this series has a lot of potential to grow in the future. There are a lot of crazy and bright ideas to be explored, and Ubisoft did a fantastic job of making the environment feel alive.

With how the current controls and gameplay loop sit, though, I can’t find myself wanting to sit down and play this much longer after its release. Here is to hoping Ubisoft and Riders Republic get even more extreme in the future.