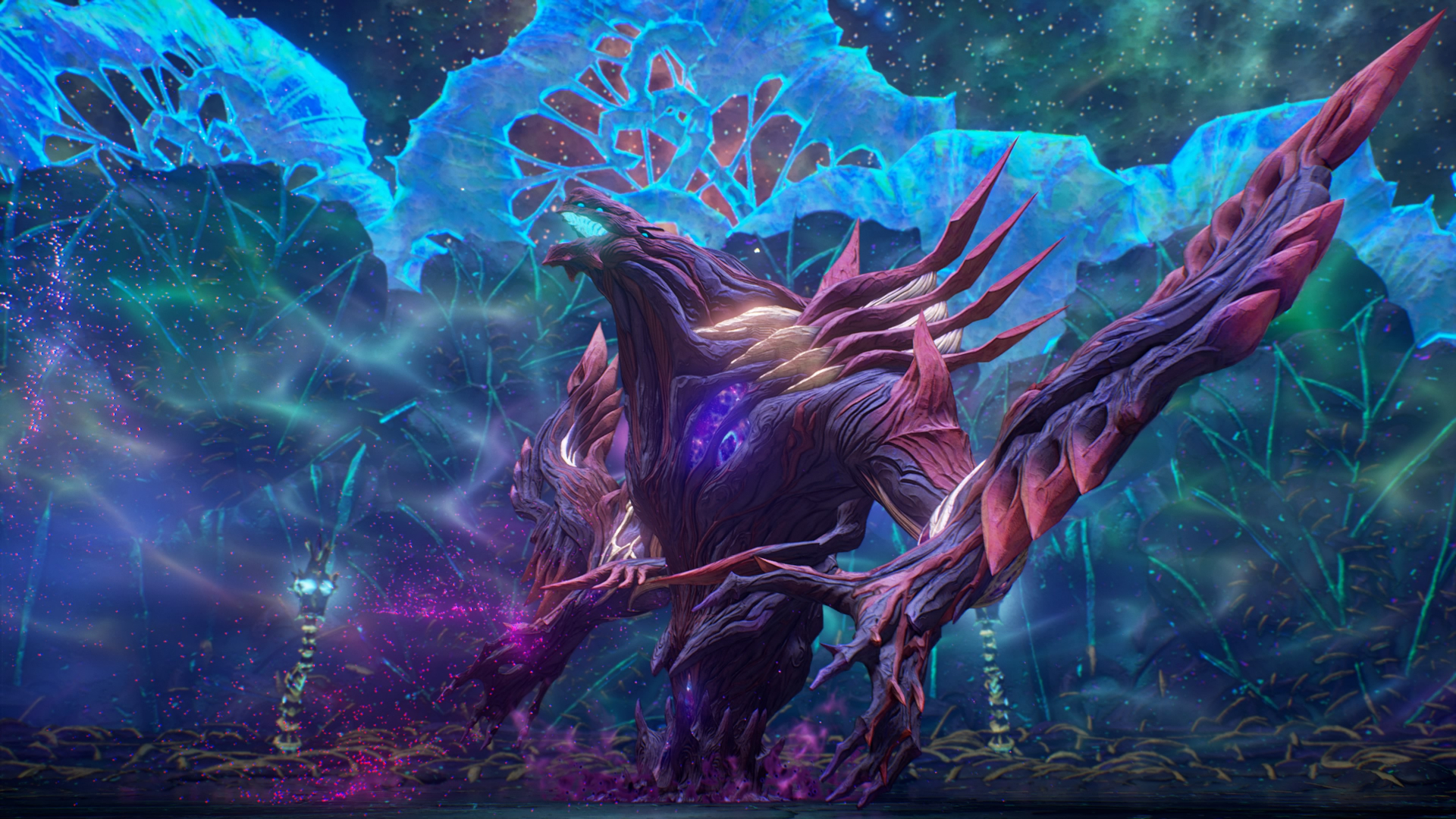 This is one of the last boss fights in the main story, so congrats on making it this far. If it’s giving you trouble, we have some tips on how to win here. Here’s how to beat the Great Astral Spirit and Subsumer boss fight in Tales of Arise.

This boss is level 58 on Normal difficulty, so be ready for a tough fight if you’re even just a few levels below that. If you’re at or above level 58, this should be relatively easy, especially when compared to Vholran.

The best way to prepare for this one is to cook any dish that increases the party’s Elemental Defense stat since this boss uses a wide variety of elemental moves. It’s also important to note that both forms of this boss are weak to Light and Lightning element attacks, so use those whenever possible.

This phase of the fight is simple until the Great Astral Spirit gets down to 50% health. Before then, it’s not very mobile or hard to hit at all — it has no legs. It’ll teleport around the battlefield when it wants to move, but it’ll only retaliate with elemental moves that can clearly be seen charging.

It can be downed automatically using Alphen’s Boost and its health will go down quickly if you attack with everyone at once during those moments.

Long-range characters like Rinwell and Shionne will destroy this boss early on. Close-range fighters will need to watch out for when it surrounds itself with Dark astral energy. Check for if the ground turns purple around its base, and if it does, back up a bit to avoid the attack.

It’ll also shoot Dark energy from its mouth. The shots cause small explosions on impact, but they’re easily avoidable if you’re not attacking from the front.

After your first Boost Strike when it hits 50% health, it’ll summon small orbs that each attack with a different element that matches their color. This is where things get tricky.

The Fire one will slam into the ground and cause an explosion, Lightning will shoot electric beams and teleport around, Earth will shoot around like a cannonball, Wind will summon gusts of wind to attack you, and Water will move quickly while casting astral artes.

Take these orbs out first with your priority being the Lightning orb because of its movement speed and beam that can hit long-range to interrupt anything you do. It can also paralyze you, which is the worst thing that can happen with every orb attacking at once.

Things will get very chaotic on-screen at this point, especially if you also have Rinwell casting her own massive artes.

No matter which orb you go for, aim to fill up the blue Boost Strike meter on its body, then use a Strike to completely destroy it. If you’re lucky, the Strike will take out multiple orbs at once if they’re floating close together.

Once you take a few of them out, it’ll be much easier to go for the Great Astral Spirit, even if there are still a few orbs left. It’ll be low on health by the time you get rid of a few since your teammates will be attacking it.

The boss adds a new mouth beam to its arsenal but its moves don’t change much. Stay away from the front of its body and you should be safe from the majority of attacks.

This section starts off with a few regular enemies that you’ve beaten in the dungeon many times before. After that filler fight, you’ll be up against the Great Astral Spirit boss again in its new Subsumer form.

This time it’ll have giant weak points on both arms that you should aim for. Taking out the first arm is a fairly simple task, even for close-range fighters like Alphen. In fact, using Alphen’s Boost makes this far easier than you’d think because it stops whatever the boss is doing as long as it isn’t in Over Limit — and it won’t be early on.

You only really need to dodge when it slams its arm down on you. You can tell when this will happen since it pulls an arm back as slow as possible to give you a fair warning.

When one weak point is about to be broken, you’ll have to press the prompt of the specific D-Pad direction that the game asks. After it’s broken, the boss will charge a Mystic Arte called Black Hole.

Spam dodge to avoid most of the Black Hole damage because the whole floor will hurt you, no matter where you stand. It’ll look just like the clip below:

After that Mystic Arte, heal if necessary. Then, focus on the next arm in the exact same way as the first. This one will be broken even quicker.

When both arms are broken, the new weak point will be at its base, near the ground. It’ll continue to cast Black Hole and summon thorns and Dark energy near its body to defend itself. It’ll also shoot lasers from its mouth that’ll miss you because you’re too close, so don’t even worry about those if you’re a close-range attacker.

However, it’s important to keep an eye on your ranged party members’ health bars. In fact, it’s probably a good idea to sub in Dohalim here to get double the healing potential if he isn’t already in your active party.

When the Subsumer’s health bar is at about 10-20%, the boss will get desperate and summon the elemental orbs from the Great Astral Spirit phase of the fight.

Ignore the orbs this time if you can because as soon as you get that last bit of health from the boss, the fight will be over. Use items to heal if you can’t wait to get healed by Shionne or Dohalim, as long as you can keep dealing damage.

Just make sure to keep attacking and only dodge when absolutely necessary. Alphen can still interrupt the boss and stun it with his Boost and Rinwell can stop the orbs from casting artes.

The fight will end with a Shionne/Alphen Boost Strike. Next up is Vholran again because, of course, he comes back.

That’s everything you need to know about how to beat the Great Astral Spirit and Subsumer boss fight in Tale of Arise. Be sure to check out our guide wiki for more tips, tricks, and boss guides if you need a bit of help.