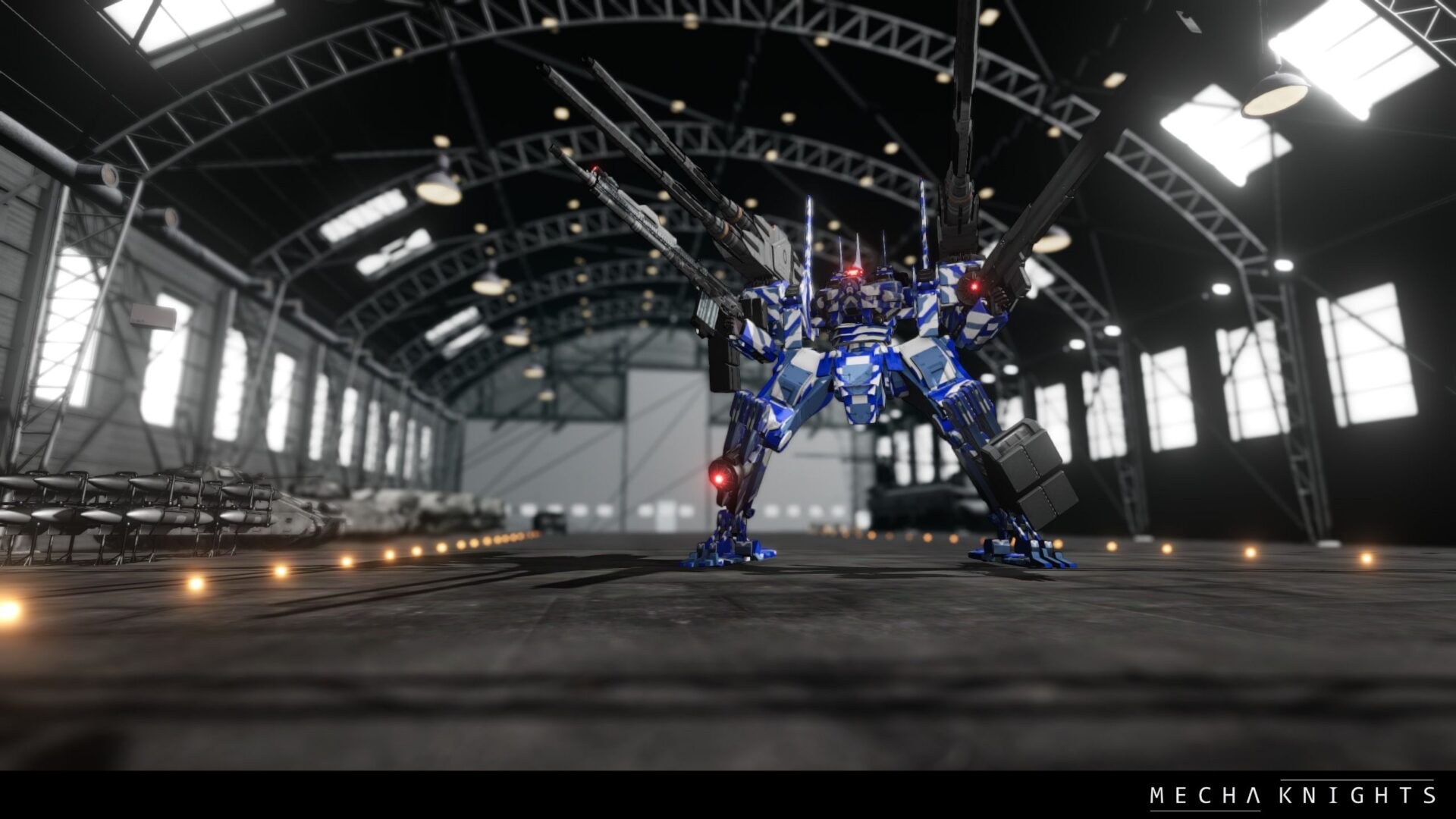 The game is set in the near future, with humanity under seemingly unstoppable attack by monsters simply called “Reds.” No one knows what they actually are, but they appear to be determined to annihilate all of mankind, spreading quickly from south-eastern Russia into the Middle East, Europe, and Asia.

The player takes on the role of a mecha pilot sent to fight against the monstrous tidal wave in what appears to be a hopeless struggle for survival.

The story certainly does not hide its sources of inspiration which include the beloved Muv-Luv visual novel series. As a matter of fact, the similarities are so extensive that Muv-Luv fans will feel right at home playing Mecha Knights: Nightmare.

We also see echoes of Resident Evil, Armored Core, and more. The developer doesn’t make a mystery of this: as a matter of fact, this game could probably be seen as his way to pay homage to the games and genres he obviously loves.

The storytelling and characters are quite good, and well convey the desperate conflict against a completely ruthless enemy with no hope of negotiation through a mix of dialogue during gameplay similar to the Ace Combat series, and the protagonist’s diary that provides further information between levels.

Since Mecha Knights: Nightmare was created by a single developer with obviously limited budgets and resources, the graphics aren’t top-notch. Yet, they do an adequate job of portraying our mecha, the levels, and the Reds. This is especially true considering that the engine often has to display very large numbers of enemies on screen.

On the audio side, the music appropriately matches the atmosphere, but voice acting can be a bit hit and miss, which likely goes back to the limited resources that could be allocated to it. That being said, the storytelling remains enjoyable despite moments in which the acting sounds a bit too cheesy.

The gameplay is divided into 20 story missions plus five raids, which basically are a pure horde survival mode in which the player is prompted to kill as many enemies as possible before calling for extraction.

While the first few missions tend to be a bit samey, with wave after wave of Reds assaulting from all directions and requiring to be exterminated with reckless abandon, things become more complex as the campaign progresses.

You’ll explore underground bases, defend downed pilots, protect evacuation routes, hunt down specific targets (I will admit that at some point I expected the term “Laserjagd” to be dropped during dialogue, but it did not happen), direct artillery barrages, fight massive bosses, test secret weapons, and more.

While in pretty much all situations, you’ll have to fight against massive numbers of monstrous enemies, there is enough variety that the formula doesn’t overstay its welcome and the gameplay remains exciting throughout the campaign.

As a matter of fact, there are plenty of tense moments in which you’ll feel like you managed to stop the enemy tide just barely, and that’s extremely satisfying,

The scripting of the missions is also nicely done, with plenty of coordination with additional land, air, and sea forces that makes you feel like you’re on a rather believable battlefield despite riding a mecha and fighting against terrifying monsters.

The raids are based on some of the same maps from the campaign, but they simply require you to exterminate massive waves of enemies while staying alive. These hordes of Reds drop useful equipment and money and progressively increase in challenge.

At any point, you can request to be evacuated from the battlefield via airlift, concluding the raid. Yet, if you overextend and get killed, you get nothing. The risk and reward tradeoff between those options is well-balanced and exciting, and due to the random equipment drops that can help a lot in powering up your mecha, it can be really addictive.

At the end of each successful mission or raid (which you can repeat as many times as you want), you’ll receive plenty of spoils that can be used to equip your mecha divided into three tiers of increasing power.

Money can be used to increase base stats incrementally, then you have parts, like heads, torsos, arms, and more, that further customize those stats. Active and passive modules provide operational flexibility and a ton of different weapons let you personalize your fighting style.

You can gear up your mecha as a short-range brawler, a long-distance bombardment master, or anything in-between, in order to tackle different situations and multiple strains of Reds.

Some of the weapons are extremely satisfying, and I’ve become a big fan of carrying dual Torden high-velocity cannons on each shoulder. They pack a massive punch and it feels awesome every time you “pull the trigger” and see enemies on the other side of the level get blown to pieces.

That being said, when fighting overwhelming hordes, mobility remains your best weapon. You’ll spend most of the time boosting around the level while trying to manage your energy, making the gameplay a lot more fluid and frenetic compared to mecha titles in which you pilot heavier robots that are stuck walking. The only relevant issue is that slopes slow you down in a way that feels unnatural, but they’re rather rare anyway.

Energy, heat, and ammo management play an important role, forcing you to think tactically and avoid dashing all over the place while holding all the fire buttons pressed all the time. Despite the frenetic action, I found myself surprised by the fact that many situations definitely require some tactical acumen to be overcome.

Speaking of buttons, the default mapping of the shoulder weapons (Q and E) on the keyboard is a bit awkward, because your fingers will mostly be busy strafing pretty much all the time. Luckily, the developer must be aware of this shortcoming, as he already announced that he will implement the ability to map additional mouse buttons.

Ultimately, the gameplay is fast, furious, tense, often challenging, and a lot of fun, which is really all you can ask from a solo project that costs all of $15.99 on Steam and can easily deliver about 15-20 hours of entertainment even without replaying any mission. If I had to ask more, I wish you could customize your wingmen’s mecha and perhaps give them orders, but unfortunately, that isn’t included, at least for now.

Mecha Knights: Nightmare isn’t perfect, and it likely isn’t for everyone. Yet, considering its nature and the limited resources with which it was developed, not only it’s impressively polished and content-rich, but it certainly blew my expectations out of the water in terms of gameplay fluidity and pure fun.

Hopefully, the game will be successful enough to warrant a sequel, perhaps involving an actual development team. Yet, if you love mecha games, frenetic action, and extensive customization, especially considering the price, recommending Mecha Knights: Nightmare is absolutely a no-brainer.