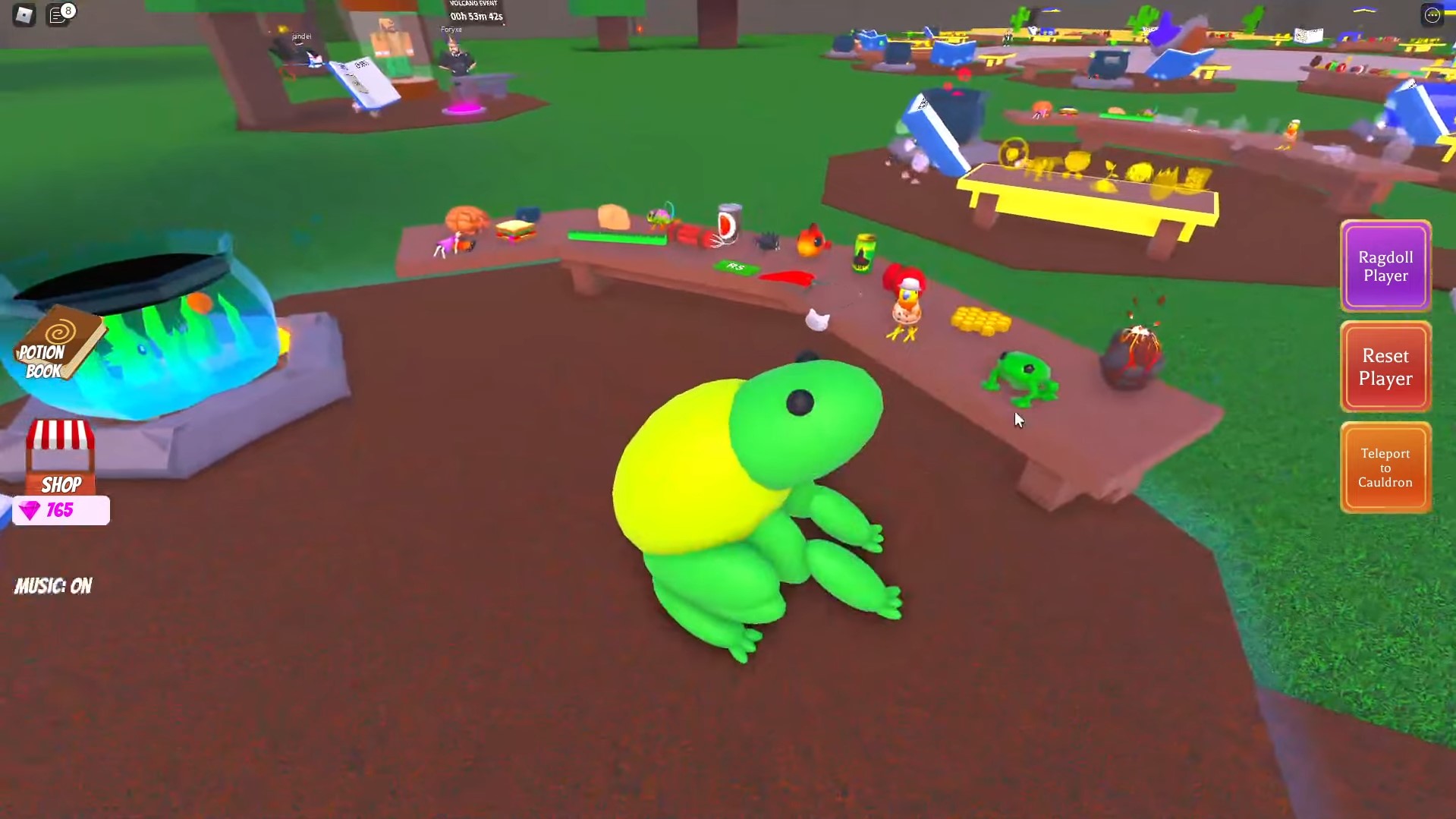 In this guide, we’ll explain how to get the Frog ingredient in Wacky Wizards, one of the newest ingredients to be added into the Roblox-based game.

Getting the Frog in Wacky Wizards

First off, you want to make your way over to the Goblin Village from your Cauldron. This used to be the skatepark, but is now a little village filled with tipis and you’ll find five Goblins stood around a Cauldron.

Speak to each of the five goblins, and they’ll ask you to make them each a different type of stew. Making each of the goblins their preferred stew will get you the Frog ingredient in Wacky Wizards, so let’s get to it.

The ‘Midget Goblin’ will ask you to bring them something to make them grow. Pick up the Giant’s Ear off the ground in the camp, throw it into the cauldron and make the potion.

Give this back to the ‘Midget Goblin,’ and then move onto the ‘Vegan Goblin.’ He’ll want the beans, so just drop the ‘beans’ ingredient into the cauldron and give him the potion.

The ‘Goblin Kid’ wants a noodle, and it just so happens there’s a ‘Pool Noodle’ lying on the ground just next to him that you can put in the cauldron. Give him the potion and then move onto the ‘Fat Goblin’ stood next to him.

The ‘Fat Goblin’ wants you in a stew. So you need to pick up the ‘Fairy’ and ‘Chameleon’ ingredients and put it in the cauldron to make the ‘Shrink Ray.’ Then drink this potion yourself, hop into the cauldron and make the potion.

You’ll now respawn at your cauldron, so run back over to the Goblin Camp and get the stew from the cauldron by the Goblins. Hand this over to the ‘Fat Goblin,’ and you’ll complete his task.

Finally, we’ve got the ‘Goblin Leader’ who wants a spicy stew. To make this, grab the chili off the floor and pop it into the cauldron. Make the potion and then hand this to him and he’ll now be happy with what you’ve made him.

With all of the goblins well-fed, you’ll now be given the ‘Frog’ ingredient in Wacky Wizards from the Goblin Leader. Return to your cauldron, put it on your workbench, and you’ll now be able to use it whenever you want.

What Does the Frog Ingredient Make?

By putting the ‘Frog’ ingredient into your Cauldron, you can make the ‘Frog’ potion which, you guessed it, turns you into a Frog.

Exactly what we’ll need this for remains to be seen, but we’d guess that you’ll need to use this to unlock more ingredients in a future update.

That’s everything you need to know on how to get the Frog ingredient in Wacky Wizards. For more on the game, be sure to search for Twinfinite with your next Google, or see more of our guides on the game below.