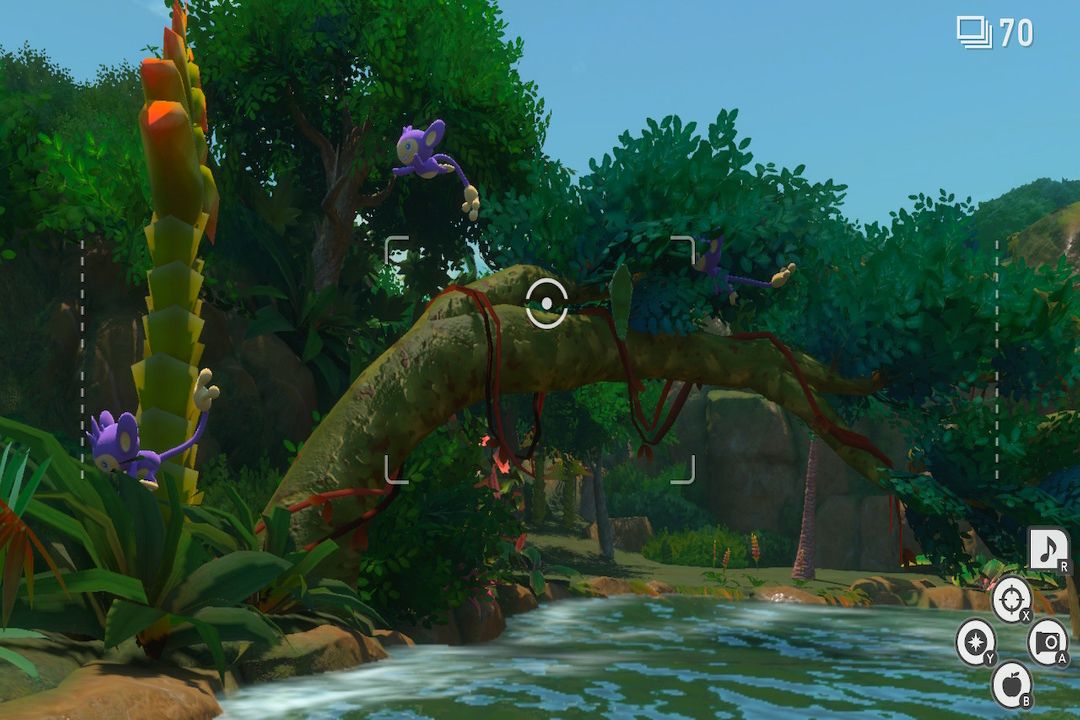 Just when I thought I was done with my Pokémon-snapping safari, Nintendo and The Pokémon Company pull me back in. This past week saw the unexpected but much-welcomed addition of free DLC to expand the already robust New Pokémon Snap package.

New Pokémon Snap’s DLC includes three new areas with day and night variants, at least 20 Pokémon that are new to the game (such as Tepig, Rockruff, Crustle, Shroomish, Gyrados, and Snorlax, to name but a handful), as well as several quality of life improvements to make a satisfying safari even more enjoyable.

My previous experience with New Pokémon Snap back in April saw me enjoying my time with the game, going through all of the courses, all of the variants, and doing my best to complete both my Photodex and as many of the requests given to me by Todd, Rita, and Phil. The latter has been made much easier and less of a headache due to one of the previously mentioned quality of life improvements.

For example, when you take a picture that fulfills the requirements of a given request, after your expedition, and when you’re selecting which photos you took to present to Professor Mirror, the photo will have a special icon in its corner.

No more guessing which photo may or may not have fulfilled those tricky and often pesky requests of catching Pokémon on film only to be disappointed when the photo did not turn out well enough to satisfy the request. This was originally my biggest issue with New Pokémon Snap (in fact, the problem was so common that we here at Twinfinite even have a guide made for requests not registering), and this issue being remedied is tremendous news.

Other quality of life improvements with New Pokémon Snap’s DLC include the ability to exit out of a level without needing to evaluate any of the photos you may or may not have taken, cutting out a lot of needless downtime with the game.

As for the new courses themselves, depending on how far you are in your New Pokémon Snap photography journey, you may or may not have all of the new areas unlocked right away.

For instance, you most likely need to complete some courses on both Beluvsylva and Voluca islands to access the Mightywide River and Barren Badlands courses respectively. Meanwhile, the first course in the game, the Nature Park, must be played through to access the Secret Side Path course, which is found by scanning a tree about halfway through the Nature Park course.

The new courses each have a day and night variant, and the night version is unlocked once you earn enough points to reach Research Level 2 on a given day course. This involves multiple play-throughs of the day variants, but when they are so entertaining and enjoyable to play through, this modest grind isn’t too much of a bother.

I started my expedition on the new courses with Beluvsylva’s Mightywide River, a slow but steady ride down a lazy river in the jungle, teeming with wild Pokémon both on land and joining my NEO-ONE in the water as well. Between a trio of Aipoms gathering around and badgering a poor Psyduck, to seeing the delight of a fierce Gyrados emerge from the water at the tail-end of the course, my jungle river rafting ride was a riveting one.

Then, I moved on to the Barren Badlands, a course located on Voluca Island. The course begins with a trip around a trio of geysers that intermittently erupt – which the first time around caused quite a startle to this otherwise seasoned Pokémon photographer.

Meandering around a suspicious-looking boulder, I threw an Illumina Orb at the nearby Crystalbloom, which resulted in the boulder dropping onto one of the nearby geysers. Curious. Perhaps I could use that to my advantage another time.

In the middle of the Barren Badlands lies a toxic wasteland of green goop, which the Pokémon Swalot calls their home. After this was the home stretch of the course, a canyon path surrounded by holes carved by what I would assume to be the Pokémon Onix, who wasn’t shy about peeking its head out to greet me and the NEO-ONE as we both passed by.

Finally, and my favorite of the new areas to venture into in New Pokémon Snap’s free DLC was the Secret Side Path found in the first course’s Nature Park. This incorporates a new feature to the NEO-ONE, the ability to shrink down to bug-like size and explore the surroundings. Formerly small Pokémon like Wurmple and Caterpie were now two times larger than I was, easily.

Whether I was literally riding on the wings of the Pokémon Emolga as it soared through the air – in one of the most impressive and coolest segments in any Pokémon Snap course – or following along the exploits of Pichu, Scorbunny, and the Dodrio that constantly stalked the pair, the Secret Side Path offered a unique glimpse into the world of Pokémon. It was a truly original course that I hope isn’t the last we’ve seen of the shrinking mechanic.

Moreover, not only are there the new Pokémon to fill one’s Photodex with, but there are plenty of opportunities to get closer looks and new angles of existing Pokémon that are already in the game. If you struggled to reach the point requirements in the base game’s levels of certain Pokémon, you’ll have ample opportunities to take new pics of familiar Pokémon in these six new courses. That only adds to the value on offer here.

Really, I’m floored by the free update released with New Pokémon Snap. Though it is not my intention to tempt fate here for possible future DLC, I feel that Nintendo could have easily charged for this particular update, as that is how much content – and GREAT content, at that – is available here.

I’m certainly and most pleasantly surprised the DLC is in fact free. Between the six new courses, the 20+ Pokémon added, and the new requests joining all of this, this is one meaty, sizable update to a game that already impressed.

Intrepid photographers and newcomers alike can now update to version 2.0 to receive New Pokémon Snap’s DLC. Be sure to check out Twinfinite’s original review of New Pokémon Snap, if you’re still on the fence about whether or not you should delve into the world of Pokémon photography yourself.