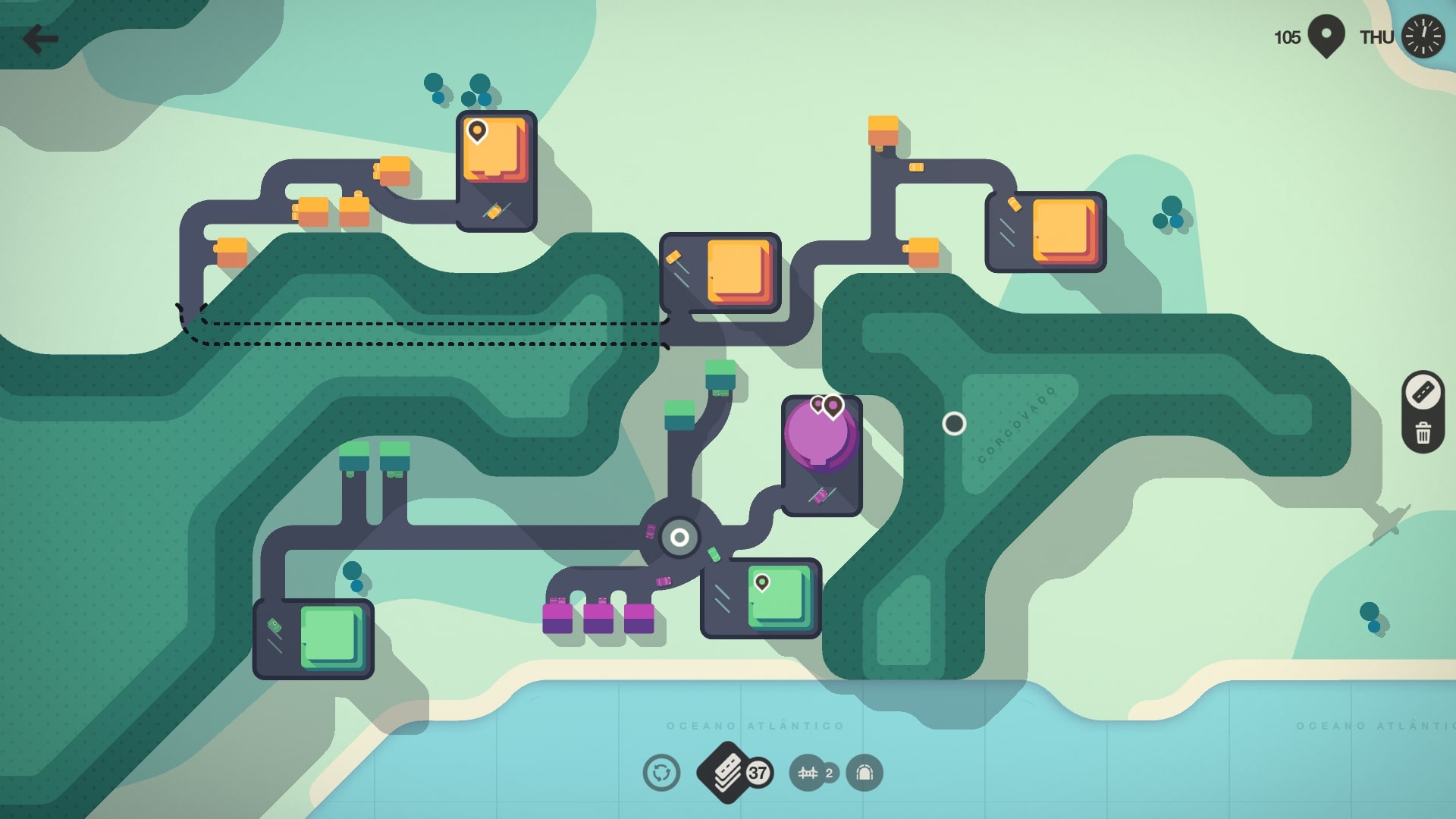 Mini Motorways is a minimalist strategy sim that has players plan out roadways in cities all across the world. You’ll take control of the traffic networks in places like Los Angeles, Tokyo, Moscow, and more as you try to create the smoothest commutes possible.

To learn more about the game and what went into it, Twinfinite interviewed developer Dinosaur Polo Club’s co-founder and designer Robert Curry, and community and engagement manager Casey Lucas-Quaid.

Ethan: I have to ask, what’s the story behind the name Dinosaur Polo Club?

Robert Curry: We just had to enter a name into the, you know, studio name thing. And so we just had to invent a thing. And my brother who I was working with on the game, he had a one-year-old son and he had some Dinosaur Club pajamas. They’re his favorite.

And then, well, he would always walk past the same bar on the way to my place, Bangalore Polo Club. So he just mashed them together and we had Dinosaur Polo Club. Um, and that’s that. There wasn’t anything fancy behind the name or anything (laughs). It just happened to be the two things that made some form of sense together.

Ethan: How did the idea of Mini Motorways come about? It seems like a natural progression from Mini Metro, so was it already an idea in the works back then?

Robert Curry: Yeah, so Mini Metro, that one, we have a much easier origin story for. I’d been to London and I liked the underground maps, and then we had an idea based on that. So we’d been thinking about how to follow on from that for a long time. We had a company-wide game jam for about three months long, just to try to find the next thing.

Roadmaps wasn’t the first thing we’d come across, ’cause I think we wanted to do a non-transportation-based thing to kind of break out of the mold. But we kind of kept coming back to the idea and we were heavily inspired actually by Justin Smith’s Freeways.

So we began experimenting with that a lot. Three of our programmers, Tom, Tana, and Michael began just experimenting with different ways of taking the kind of road-building mechanics and having them in a sort of real-time mini-style puzzle game.

And that took many, many months to kind of work out how that would be fun…Yeah, so that was sort of how we arrived at it.

Ethan: Were there specific things that you wanted to improve upon or change when going from Mini Metro to Mini Motorways?

Robert Curry: I’d say this one, it was a tough journey for us, actually. It was a lot harder to build this game than it was to build the original. We designed Mini Metro in about an hour and then everything just kind of worked from there. It was the easiest game I’ve ever designed, and I’m not ever expecting anything to be as easy as that in the future (laughs).

Mini Motorways, I don’t know, it was like six months of just dragging it, kicking and screaming, into the world. And I think over that time, we really learned what made the first game so special as well.

So it was a long time of us both attempting to make this other game and also trying to learn why the first game was good. So, I don’t think we actually set out with a goal of improving on certain things because…even if we did, we didn’t really understand it in the first place anyway.

But what we were really aiming to do was to try to capture the same feeling, without making a sequel. So we wanted to have the game have the same sense and cause the same emotions I suppose. And play type, I guess, without being the exact same game.

Ethan: How did you decide which cities to pick for Mini Motorways? Was it just the biggest cities? Or the ones with the most traffic?

Robert Curry: So the first ones we pick, we always kind of aim for the most famous or notorious ones. So, it was kind of obvious, the first two anyway: LA and Beijing. Just ’cause they are very path-focused cities and have very, very famous traffic problems.

I’d say for the first game, [Mini] Metro, I think it was easier because we were picking them for sort of positive attributes of worldwide recognized subway systems. Whereas now we’re sort of almost picking them because they have very bad traffic (laughs). And we like to pick them from all around the world as well, so we have an even spread around the world.

We’ve also got to pick them based on what they look like because they have to have kind of interesting geography.

Robert Curry: Yeah, it’s definitely our sort of signature thing now. We like to pick aesthetics that we think people are familiar with from outside of games. So we see these as kind of like an interactive Google maps kind of aesthetic there.

So that way we can draw upon all of the kind of things you know from that kind of style. and have been sort of, yeah. And also I think it does help make the game a bit easier to communicate and to highlight things when you need to focus on them, yeah.

Ethan: Are there any gameplay ideas or mechanics that were left out because of the minimalist approach?

Robert Curry: That’s a really good question. We did have earlier prototypes, which had boats going up and down the rivers, which would then cause bridges to go up and down. Also, we had trains doing the same thing with crossings. I don’t know if that was because of the art style, or just because we didn’t have time to explore that.

I think it’s almost like we self-edit before we even get to that point. And we don’t push ahead with things that we don’t have a strong visual idea for first.

Yeah, so actually, I don’t think there has been, because we tend to only sort of push ahead with things that we have a solid gameplay concept for.

Casey Lucas-Quaid: I think the only visual change that I remember was being suggested kind of back in the day of the prototyping stage that didn’t make it into the final game was differentiating some buildings as landmarks or having some buildings that were persistent buildings because they were a major feature of the city skyline or something.

But I think that that was less of art saying ‘not so great decision’ and more of thinking that would impact the kind of fun randomness and sort of the puzzle-solving aspect of the game by having some spawns that were permanent every time.

Ethan: It might be difficult in a game like this, but are there any plans to add any kind of multiplayer features outside of leaderboard and challenges?

Robert Curry: We don’t have any sort of full-on actual synchronous multiplayer. We don’t have anything on the cards for that at the moment. What’s been the kind of fan requests around there, Casey?

I’ve loved the idea for a long time of players being able to design challenges and having a custom leaderboard for player-designed challenges. Because at the moment we have a daily challenge and a weekly challenge, and we’ve also got some mystery challenges. And we’re working towards developing an actual challenge mode for the game as well.

And yeah, I just think it might be kind of fun and chaotic to let players design some awful, awful challenges for each other and then see how everyone does.

Ethan: Is there anything else you’d like to share with potential new fans who haven’t played Mini Motorways or Mini Metro before?

Robert Curry: We like to make zen, chill out, puzzly experiences that are very easy to get into but are a lot deeper than you think at first. I think we’re pretty happy with the niche that we’ve sort of developed over the years. What would you say, Casey?

Casey Lucas-Quaid: I’m actually going to go in a slightly different direction and say that if anyone here is planning on picking up Mini Motorways for the first time, or if you’ve played it a little bit and you don’t consider yourself an expert yet, one of the coolest things about our upcoming steam launch is that we’ve had some awesome streamers and content creators making videos for the games on YouTube that cover a lot more in-depth strategy than our tutorial teaches you.

So once you feel like you’ve kind of mastered the basics, or on the other hand, if you feel like you’re completely clueless and just want someone to shine a light on which way to go, I know KatherineOfSky did a fantastic kind of beginner’s strategy guide in her first look video. And I’m sure by the time this airs, there will be a couple more floating around as well.

Mini Motorways is available now on PC and Mac via Steam, and on iOS through Apple Arcade. It’ll also be coming to Nintendo Switch in Q1 2022.