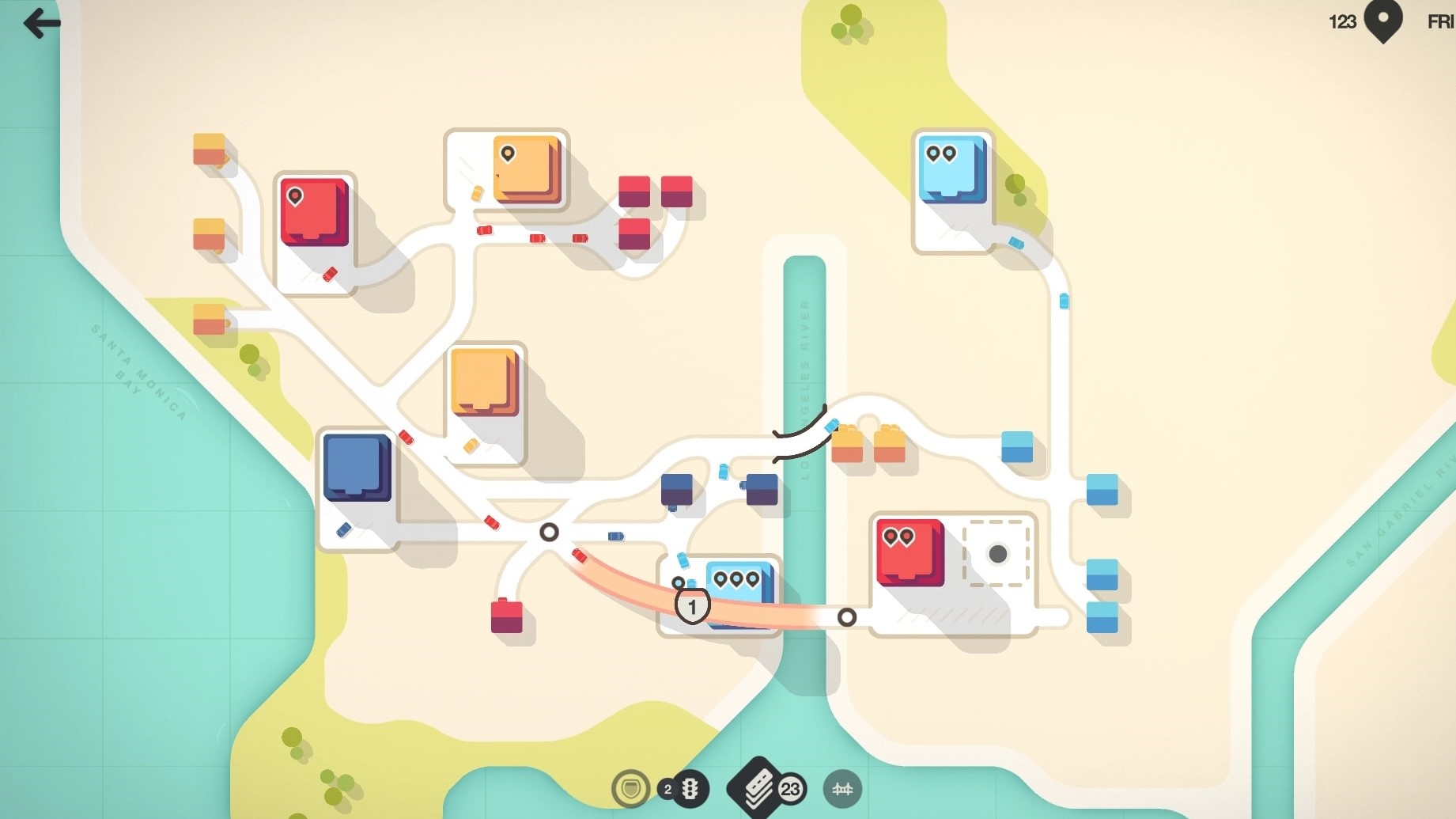 Being stuck in traffic is never a good time. But what if you could control the traffic by placing and rearranging roads at will? Mini Motorways allows you to do just that, in the most relaxing way possible. It doesn’t have the most to offer when it comes to its length or replayability, but the game takes you on a ride that’s short and sweet.

Mini Motorways is a minimalist strategy sim that brings you to cities all around the world like Tokyo, Moscow, and Los Angeles, and puts you in direct control of their traffic networks on a much smaller scale. You’ll need to keep cars moving to their destinations for as long as you can, so avoiding traffic jams is the goal here.

Mini Motorways starts you off in a small section of a city and your only objective is to make sure that cars from each house can reach the larger buildings of the same color. So blue cars need to get to blue buildings, yellow cars to yellow buildings, and so on. Color plays a big role here so it’s important to note that there’s a colorblind mode for those who need it.

Little pins will appear on the larger buildings to indicate that a car wants to go there. It’s your job to make that trip as efficient as possible by placing roadways between buildings. This task is simple enough, but as time progresses, more houses and other buildings will start to appear, causing your tiny city to expand in unpredictable ways.

That’s where the real fun begins, as adjustments need to be made on the fly for cars to get to their destinations. And the more pins you clear, the higher your score for that city. If too many pins start to build up at one location without cars coming to remove them fast enough, a red timer will start. If that timer fills up, it’s game over.

To get the job done, Mini Motorways provides a limited number of tiles that you can place to create roads. The game only provides standard road tiles at first, but as the city grows, so do your options for traffic infrastructure expansion.

As time passes, the days of the week will go by in-game. At the end of each week, you get to choose between two upgrades to help with your city planning. They include things like bridges that can cross waterways, streetlights that can lead to more efficiency at intersections, and motorways that can create shortcuts over existing roads.

Running out of road tiles can leave you stuck, unable to make new roads in the middle of a week as new buildings continue to pop up. You can always delete existing roads to regain road tiles, but that could be costly if the deleted roads were helping with efficiency.

Mini Motorways makes you really take your time while considering these upgrades, adding some genuine challenge to an otherwise relaxing game. But if you ever need to slow the game down for more time to think, there’s an option to pause everything as you make adjustments where necessary. There’s also a fast-forward option for those who want the cities to grow/move quicker.

The upgrades you need usually depend on the city you’re in and what you’ve built so far.

Each city is essentially a new level with a new topographical layout that feels distinct, even with the minimalist art style. Creativity and outside-the-box thinking are necessary to keep your city running for as long as possible, and no two cities should be approached with the exact same strategy.

Cities like Beijing have rivers or other bodies of water that call for the use of a number of bridges, while others like Los Angeles require the use of many elevated motorways and roundabouts.

It’s a joy to gradually find out which roads work best in which cities and finding the most efficient road placements to solve my many traffic issues never got old. It also helps that, to earn new cities, the game only requires you to complete 300 trips in any given location (300 pins cleared) to unlock the next city.

300 trips may seem like a lot, but I regularly completed over 1000 trips in multiple cities, so it isn’t too difficult to see everything the game has to offer. You’re never stuck in the same place for too long, and you’ll want much higher scores than 300 if you want to place high on the game’s leaderboards for each location.

Going beyond the standard city levels, there’s also a daily challenge and a weekly challenge. They change the game up in a few unpredictable ways by using unique modifiers like unlimited road tiles or mystery upgrades to keep you on your toes.

Daily challenges can only be played once, while weekly ones can be attempted endlessly as you aim for the top global score. It would be nice if there were challenges like these for each of the standard maps, though, since the dailies and weeklies are only on one map each.

Mini Motorways is a short game, for sure, but it’s one of those games that you can get lost in for a little while as you rack your brain trying to figure out how to make all the traffic on-screen run smoothly as possible. Never in my life have I found joy in the thought of planning out roadways, but these mini-cities do bring a smile to my face.

The slow, time-consuming monotony of big-city traffic has somehow been transformed into a game that I can’t wait to play more of.