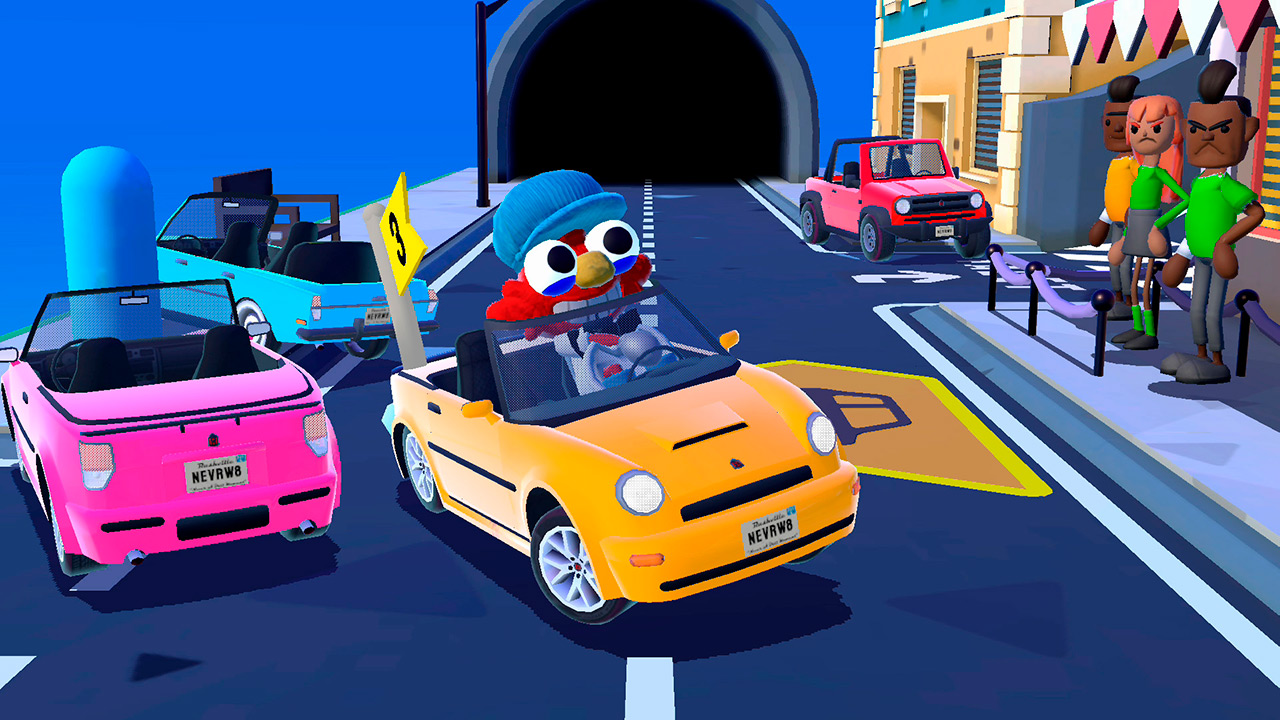 Very Very Valet wants to be the next Overcooked. It’s clear from its puppet valet characters, bright and colorful levels, and simple but chaotic gameplay that it wants to be the next hilarious co-op party game you’ll get out the next time your friends are over. Yet while it attempts to follow in the footsteps of the chaotic cooking game, it doesn’t quite pull it off.

The premise here is simple, you and your friends are valets, and you must take incoming customer’s cars, park them up — if you can call it parking — and then bring them back to the pick-up point when the customers are done. There aren’t any rules here, other than you need to pick up the cars and drop them off before the customer gets too impatient and the red bar above their heads fills up and the car disappears for good.

For some not too serious fun, it’s enjoyable enough, though even after just a handful of levels, it felt more and more that the level designs and difficulty here are targeted towards four players. Things do get toned down if you’re playing on your own — though things are still suitably hectic — but once you add even one friend in to help you out, the difficulty does seem to spike quite noticeably.

Even the end of level ‘highlights’ reel suggests that the game really wants you to play with four players. The highlights look to get a cool three-second clip of each character doing something wild, but when playing with just two players, the game got a cool clip of both my co-op partner and I each, and then the other two clips were of our characters just standing there, literally doing nothing. I get that they’re just filler, and it’s not an integral part of the game, but it did further highlight the number of players the game wants you to play with.

This is problematic if you don’t have three friends to join you in the fun for the entirety of the game and, combined with the janky controls, Very Very Valet often blurred the lines between frenetic fun and just pure frustration.

It’s the controls that became my biggest gripe with Very Very Valet throughout its 20+ levels that took me to bowling alleys, cliffsides where I catapulted cars from the isolated car park island back over to the restaurant on the mainland, and even airports. At the beginning of the game, you’re given a brief tutorial so you know the basics. You press A to hop into a car when you’re on-foot, B to jump, Y to perform a little dash/bump and then the left analog stick is used for movement both on-foot and when you’re in a car.

The problem lies in the car controls and I’m not entirely sure whether they were intentionally made to feel as janky as they do a la Octodad, or whether they could have used a little more time in the oven. The issue comes with actually steering the cars, with players pointing the analog stick in the direction they want to go from a top-down perspective. Reversing is done by letting go of the analog stick and then moving it in the opposite direction to the way you’re facing, and you’ll only really be able to pull off sharp turns by pressing and holding Y as you steer.

It definitely requires a bit of time to get used to, but even after a good few hours with the game, I still felt as though the car controls weren’t tight or precise enough to keep up with the action. It’s here that Very Very Valet falls short of the lofty heights of Overcooked as a chaotic co-op title. Where Overcooked ensures its controls are tight, simple, and effective, allowing you to focus on the insane number of orders and prep work you’ll need to do to get your dishes out on time, Very Very Valet tries to have both chaotic controls and gameplay and it flounders as a result.

What you’re left with is a game that can feel unfair at times. Missing that third and final car drop-off before failing a mission because your car decided to plow into another vehicle on the left rather than reverse as you thought you had does little to add to the enjoyment. Things do get better when using the Pro Controller’s larger analog sticks, and after a few more hours poured into the game, but at this point, you may have already switched it off in favor of something else.

If you’re willing to overlook these issues and persevere, there’s some good fun to be had here, and the more the merrier is most certainly true here, too. Over its 24 levels, Very Very Valet introduces a number of zany mechanics such as warp tunnels, catapults for launching your cars from one place to another, no parking zones you must avoid at all costs, and a selection of power-ups to help turn the fortunes back in your favor.

The level design really does become the star of the show here, with each one meticulously designed to test not only your driving skills but also your teamwork and communication. Will you split into teams of parking and drop-off, or have one person operating the catapult while the others focus on getting cars back and forth?

Perhaps one person repeatedly trying and failing to do the ramp jump is hindering your team’s progress and their time is better spent elsewhere. Figuring out how to crack the code of each level as part of a team is a huge part of the fun here, and the team at Toyful has done well to ensure each one brings its own unique mechanics to the table.

All of this works together to ensure no two levels feel overly similar, and there’s an increasing level of challenge as you advance through the different groups of stages. Alas, your appreciation of the level design will likely be dictated by the controls and whether you can actually navigate the obstacles and various features without them sending you veering off a cliff edge or into the side of a train by mistake.

I really like the idea of Very Very Valet, and it’s a good attempt to emulate that chaotic co-op party action that the likes of Overcooked and Moving Out have done so well, but its janky controls don’t do it any justice. That, plus the relatively small number of levels in the game for the $30 price tag makes it a difficult one to recommend.

If you’re looking for something to pass the time on a flight with a friend, or just something to occasionally whip out once you’ve had a few drinks then it’ll do the job, but it’s unlikely to be a staple party game for years to come.