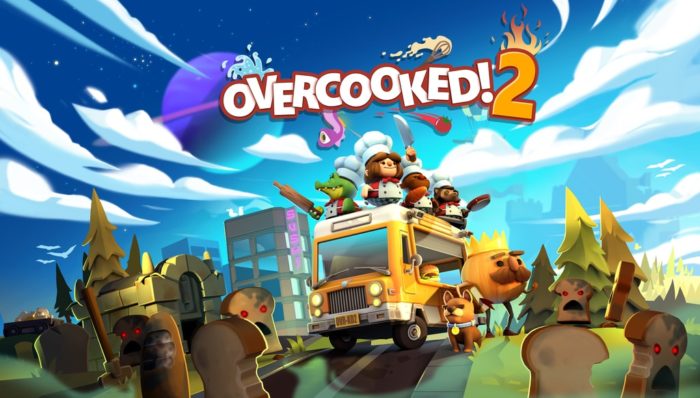 A co-op game is made great by being fun regardless of whether you and your partners are playing well or poorly, and Overcooked 2 absolutely perfects that. When everything goes smoothly, you all perform your roles perfectly, and nothing is set on fire. you feel like master chefs who are capable of anything. Yet, failing miserably, with everyone shouting at each other, can see you rolling around in fits of laughter. In co-op, Overcooked 2 is incredibly fun no matter how good you are at the game, but it’s not quite the same experience on your own.

This time around, you are setting out to protect the Onion Kingdom once more, trying to quell the threat of the Unbread. Yes, they’re zombie pieces of toast. If you played the first game, you’ll get to grips with the premise quickly in Overcooked 2. You and at least one more chef work together to complete a series of levels, each of which sees you frantically cut, fry, boil, and bake a load of ingredients to create a variety of dishes. As the clock ticks down and the tempo of the music increases, you dash across the kitchen level in order to get the dishes out to the hungry customers before it’s too late. The more dishes you get out in time, the higher your score is and the more stars you’re awarded. It’s breathless stuff, but immensely fun.

While the concept is the same, Overcooked 2 brings a load of new ideas to the kitchen to ensure that you’re not just retreading the same things you did in the first game. Of course, the pizzas, salads, and burgers return, but you’ll now be making sushi, burritos, cakes, pancakes and more as you progress through the six sets of levels. However, it’s the new tweaks to level design that make every level fun. Dynamic levels are far more frequent in Overcooked 2. Levels will change shape, layout, and even location on the fly, giving you something else to weave into your tactics. Add portals, moving walkways, fire, and controllable platforms into the mix and navigating the levels often poses just as much of a challenge as the recipes themselves do.

The level design is excellent across the board, though, and no idea is ever overused. Almost all of them feature multiple times throughout the story mode, but they’re spread out and mixed up with new recipes so that you’re always kept on your toes. One minute you’ll be making sushi in the middle of a busy road, dodging the oncoming vehicles, and the next you’ll be baking cakes from the basket of a hot-air balloon as fire is launched onto the floor of the kitchen.

Overcooked 2’s level design is best enjoyed alongside at least one friend, and it has clearly been designed with co-op in mind. Communication is rule number one and, to be successful, each player should have assigned roles and they need to stick to them. If you’re making sushi, which is probably the most common recipe in Overcooked 2, someone should be on rice, while another should focus on chopping fish or washing dishes. If it all runs smoothly, you’ll get all the dishes out without many problems, be awarded with three stars and you’ll move on to the next level. You get a great sense of accomplishment from performing well as a team, and the star requirements are just high enough that you’ll want to keep trying to beat your score. It’s frustrating that there’s no retry option once you’ve finished a level and you have to go through two separate loading screens to restart, but that won’t deter you too often. Even if you fail miserably, setting fires everywhere you can, accidentally throwing finished meals into the trash, and finishing with a minus score, Overcooked 2 is a lot of fun. You’ll be laughing and screaming at each other for being a liability, and the game’s charm makes it just as enjoyable during these moments as it is when you’re doing well.

It’s also really easy to jump into if you’re new to Overcooked. My brother joined me for some of my playthrough and after a few rounds of him chucking lettuce into the river and us getting dangerously close to recreating that Gordon Ramsey “Idiot Sandwich” meme, he got the hang of it. Soon, we were getting three stars on the early levels after just one or two attempts – one to work out a strategy, and maybe a couple more to perfect it. After all, Overcooked is about making the food we all love, and the recipes are simplified versions of how they’d be made in the real world. The only thing new players need to learn is how to move, chop, and throw, all of which are just a press or hold of a button. That being said, the later levels get pretty tough, and you’ll want as many players helping you out as you can get.

If you’re looking for more sous chefs, Overcooked 2 makes that much easier with the addition of online multiplayer. Its omission was the first game’s biggest flaw, as it kept a lot of players from experiencing the game as it was supposed to be played. Jumping online is pretty seamless in Overcooked 2, with you being in a game in a matter of seconds, but it’s far more chaotic than it is offline. Most people don’t have headsets connected at all times, so communication goes out of the window in public matches. Everyone just runs around the kitchen like headless chickens, doing whatever seems to need doing. It’s chaotic and difficult to keep track of, but it’s far easier than playing with fewer people. Not having to focus on multiple things at a time makes life in Overcooked 2 far more simple, so getting all three stars is less of a struggle. You can, of course, play online with friends, so that you can take the coordinated communication online.

You can still play Overcooked 2 on your own, but it’s nowhere near as fun. You control two chefs at once, being able to switch between them with the press of a shoulder button. It tries to keep the co-operative style with the use of two chefs, but without another player to talk to, much of the tension is removed. Although you can move one while the other is chopping, one of your two chefs will often be stood still with nothing to do as you run ingredients back and forth with the other. It doesn’t help either that the game is very difficult when you’re playing alone. The levels aren’t altered for one person, so you have to keep an eye on everything a team would, and controlling two chefs at once adds another element that’s never a worry when playing with others. In the later levels that become more and more dynamic, there’s often simply too much to think about for one player, seeing you scrape through many of them with just one star. The earlier levels are still fun, but anyone without a partner may find progression difficult.

Overcooked 2 is one of the best co-op multiplayer games around, no matter how you plan to approach it. If you’re after something ridiculous to mess around with, setting fires instead of feeding your customers, that’s easily found, but jumping into the wonderfully designed dynamic levels to test yourself and a partner with the new recipes is equally as fun. It’s still difficult to recommend if you’re planning to play alone, but the welcome addition of online multiplayer means you should never be short of sous chefs if you need them.