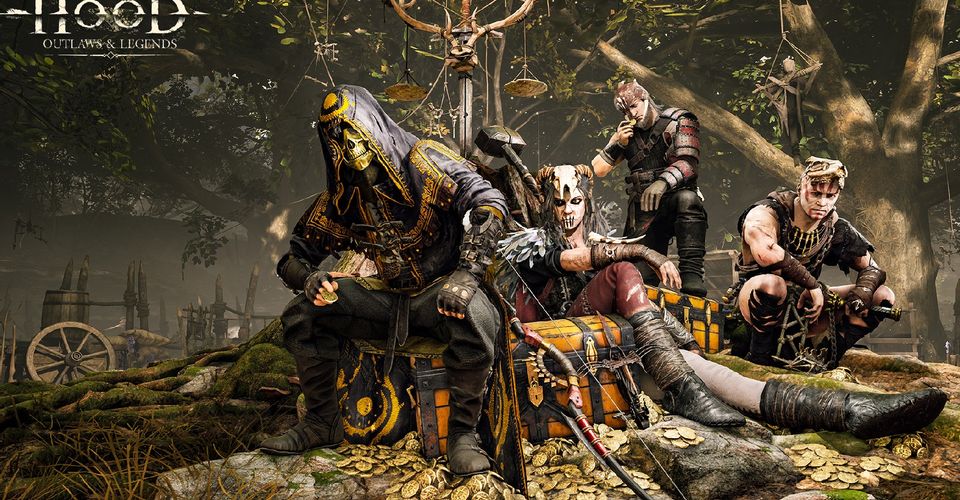 It’s not exactly uncommon these days to see multiplayer games release even when they’re unfinished. Sometimes, it’s for the best, showing off a title’s potential so people will stick with it until it’s done. Other times, they can be frustrating in how little they offer, and in how they require more of an investment than their initial price tag. Hood: Outlaws & Legends leans toward the latter, bringing a novel gameplay concept to the table that doesn’t feel fully realized.

Which is a shame, because said concept makes for a multiplayer experience ripe for exploration. Set against the backdrop of the Robin Hood mythos, the game is a PvPvE stealth title, pitting two teams of four players against an infinitely spawning group of computer-controlled enemies.

Whereas the computer-controlled enemies – referred to as the State – need only to find and kill any opponents in the area, the two teams of four players are limited to more stealth-focused gameplay. They’re tasked with sneaking through one of six maps and stealing a store of treasure from the State, all while avoiding detection whenever possible. Being spotted can result in death or penalties for their team, hampering their ability to come out on top.

Each team is also going for the same target and can interfere with the opposing factions in a number of ways to ensure they walk away with the riches.

You can kill the opposing team’s members in direct combat, and force them to wait for a respawn at select points on the map; lure computer-controlled enemies to the opposing human team’s position, and nab the treasure while they’re clashing; or ambush either faction with smoke bombs and thieving tools, taking the Treasure right out from under them while they’re blinded or disoriented.

This made several of the first few matches I undertook a blast to play through. There was always the potential for the game to go in directions I never expected, and having to adapt to whatever was thrown at my teammates and I made the game feel fresh with each new heist.

Further adding to the variety are the different characters you can play as in Hood: Outlaws & Legends. There are four different classes currently available to choose from, and each has their own strengths and weaknesses to use in tandem with your teammates.

The Ranger, for example, can snipe enemies from a distance, quickly set up climbing ropes to higher areas, and incapacitate computer-controlled enemies that other classes would struggle against. The Brawler, meanwhile, can open routes through areas that are otherwise inaccessible, carry Treasure to an extraction point more quickly, and take down opposing player characters fast with powerful melee attacks.

This gives the game’s characters a sense of filling specific roles and makes teamwork essential. The outcome of matches could be determined entirely by whether or not my teammates and I were working together and utilizing our characters’ strengths properly. This made victories that much more rewarding when we all came together like a well-oiled machine.

To top it all off, there are a variety of unlockable cosmetic items and lore bits tied to each character. They’re earned in-game based on how often you play as a given class, meaning each one feels like a reward to be gained from playing the game instead of something to be purchased for variety’s sake.

If this all sounds great, that’s because it was. In the first few hours of playing the game, it was clear that developer Sumo Digital had come up with a fantastic premise and knew how to capitalize on it.

After those few hours though, something else became crystal clear: What I’d seen from Hood: Outlaws & Legends in that time was all it currently has to offer.

The core gameplay mode is the only one available at this time. While it can feel varied and full of possible scenarios at first, it won’t take long before you start to notice the same scenarios occurring based on the map it takes place in and the classes each team has chosen.

There’s no way to tweak the win conditions for matches either. You’ll always be playing a variation of capture the flag, and securing the treasure a single time will be the only way to win the match. This makes all the other elements of the game feel like fluff after a while, and matches between more experienced players can quickly devolve into everyone bee-lining for the treasure to end things as fast as possible.

Likewise, the limited pool of characters and maps becomes hard to ignore the longer you play. Each match will begin to feel routine, with players needing to carry out the same actions in the same places over and over again. Trying out different combinations of characters can stall this, but doing so will leave your team at a disadvantage if they’re missing a certain character’s strengths in a portion of the area.

As a result, it’s hard to want to play long enough to get those cosmetics and lore unlocks. Doing so would require playing dozens and dozens, if not hundreds, of matches for each character. With the limited variety available at this time, this becomes little more than a slog after only a few play sessions.

Granted, these are likely issues that’ll be addressed in future updates to the game. Sumo Digital already has a year one roadmap set up, and there are both free content updates and paid DLC included in said plan.

As it stands though, this only goes to show that their game is incomplete. Anyone who invests in it now will be left with the framework of a potentially impressive multiplayer experience and will need to wait a while before it fully lives up to its promise.

There’s a great game inside of Hood: Outlaws & Legends. When it comes together properly, it’s one of the most interesting titles I’ve seen in a while. As it is now though, there’s not enough content available to truly show off its potential, and early adopters will be left waiting for it to grow into something truly exceptional.