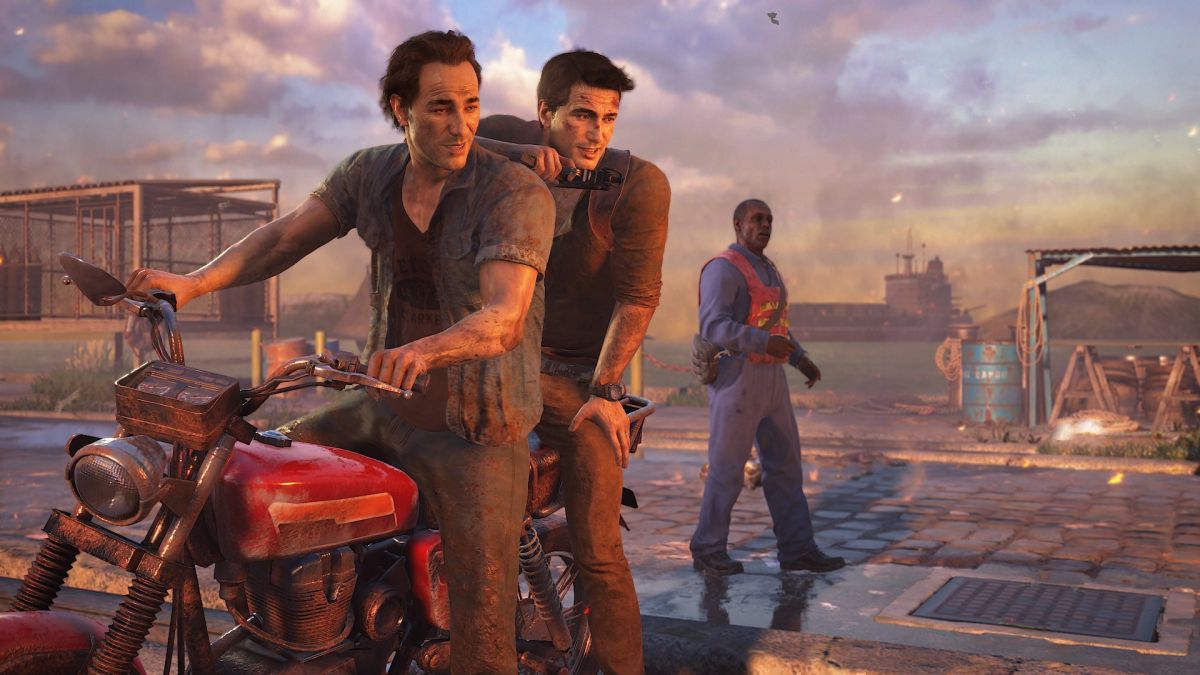 It is hard to believe that it has been five years since Naughty Dog released the final chapter in Nathan Drake’s saga, Uncharted 4. The game is filled with so many intense, heartfelt, and beautiful moments that we still think about even today.

To celebrate that anniversary, we’ve compiled a list of the five most insane moments that happen in Uncharted 4. Be sure to let us know what you think of this list, as well as leave comments on your own favorite moments down below.

Obvious spoilers ahead, don’t proceed if you haven’t played Uncharted 4 yet and plan to at some point.

Uncharted 4 wastes little time getting into the thick of the action, as it opens on a shot of Nate navigating a boat through a deadly storm. The waves are massive and the rain is thick, creating an imposing and terrifying atmosphere, as players have no idea what is going on or even where they are going.

To make matters worse, an army’s worth of enemies starts attacking the boat, peppering it with bullets and ramming it in order to try and sink it. While Nate eventually gets some offense in, ramming some of the other smaller boats, the scene ends with him and Sam getting knocked into the water as the screen cuts to black.

Being thrust into this action without any knowledge of what is going on make for one heck of a fun start to the game.

Fighting Nadine in the Rossi Estate

It isn’t very controversial to say that Nadine Ross isn’t everyone’s favorite character in Uncharted 4. She doesn’t really add much to the game as an antagonist, as her character lack any real depth, although that’s rectified thankfully in Uncharted: The Lost Legacy.

With that said, there is no denying that the fight scene you have with her the first time you meet is awesome. Like Nate, some players may go into the fight expecting things to be a cakewalk.

It turns out Nadine is an insanely good fighter, though, as she tosses Nate around the room, throwing him through tables and sweeping his legs out from under him. But while she dominates pretty much the entire confrontation, experiencing the fight for yourself is thrilling, as you’ll be trying to mash buttons and take her down all the way until she throws you out the window.

Escaping collapsing buildings is kind of one of Nate’s specialties at this point, as it has occurred more than once throughout the series already. Since it has happened so many times, you’d think that experiencing it once again in Uncharted 4 wouldn’t be all too intense, right? Wrong.

The section where Nate and Sam have to escape the collapsing buildings high above the clifts of Libertalia is breathtaking. This sequence sees the brothers platforming amidst falling debris, enemy gunfire, and a beautifully terrifying landscape that would mean their deaths if they fell from its heights.

This action and the awe-inspiring scope of the environment help to make Libertalia one of the most memorable levels in the series, as it all goes on for well over five minutes straight.

While there is definitely a sound argument that the final boss fight of Uncharted 4 feels completely out of place gameplay-wise, you’ve also got to agree that the sword fight with Rafe is pretty insane.

This is a character that players have been dying to get their hands on all game, and the moment they finally get the chance, the confrontation turns into a sword fight to the death. The combat between the two is intense, as Nate has to parry and thrust his sword against the expert swordsman if he hopes to survive.

On top of all of this, the boat around them is burning down, meaning Nate will go down with the ship if he doesn’t win quickly. The atmosphere, stakes, and gameplay of this moment serve to create arguably the coolest boss fight in the series.

It is safe to say that the Madagascar chase sequence in Uncharted 4 is not only the best level of the game but that it is also arguably one of the best moments in video game history. This series of events has three different layers to it.

The first is where players control a car driving through a crowded market while trying to avoid an armored vehicle that has a mounted turret. This part of the gameplay alone is crazy enough, as you have to weave in and out of areas in your Jeep to avoid being killed.

Escaping from this armed vehicle is just the beginning, though, as Nate and Sully locate the convoy that is chasing Sam right after they do. What follows is an intense mix of action that sees Nate being pulled by a rope attached to a crane cable.

While holding on for dear life, Nate crashes through shacks, gets pulled through the mud, and even has to dangle off a bridge over the river while avoiding obstacles. He is eventually able to make his way onto the crane truck, thrusting him into the section’s final series of events.

The final act of this setpiece has Nate exchanging gunfire with enemies while switching between vehicles, eventually taking control and driving them himself. While this may sound similar to action setpieces from previous games in the series, this time around is far more hands-on.

Alongside having to choose which cars and motorcycles to switch to, Nate also has to drive them and shoot back at enemies. This multitasking mayhem that comes along with this makes for one heck of an epic sequence you’ll want to go back and play over and over again.