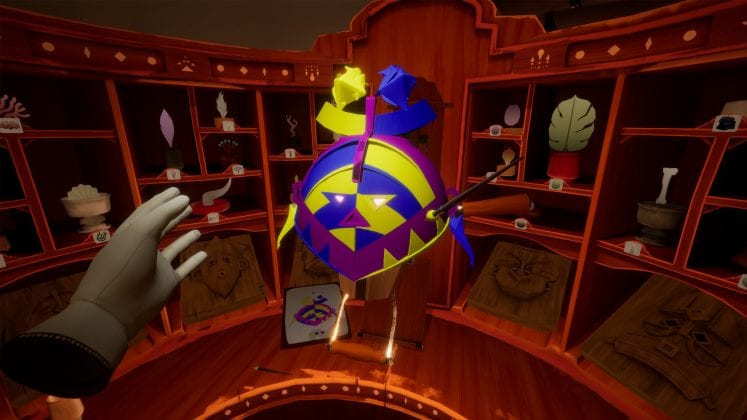 Maskmaker is the kind of game that can only really exist as a VR title. Crafting different masks and exploring magical worlds, while a novel idea, is something that just wouldn’t have the right impact if you were holding a controller and staring at your TV. In VR, I was in these worlds. I was crafting the masks, delicately adding color in a paint-by-numbers fashion to my wooden creations with a flick of my wrist. But like a lot of VR titles out there right now, Maskmaker’s scope is somewhat limited and in doing so limits the enjoyment you’ll get out of it.

The story follows your journey as a Maskmaker’s apprentice as you travel through different magical realms in order to seek out Prospero, the king of the realm whose identity you must ultimately reveal. A lot of the story is played out in short, flashback cutscenes that play out around you as you stand in the environment, and some solid voice acting work from Prospero himself provides additional context as you find different objects and progress through the story. It helped make the whole adventure feel that little bit less lonely, as you navigate these largely empty realms and solve the puzzles they house.

It’s navigating these worlds that make up the bulk of the gameplay here. In each realm you explore, you’ll find bodies with different masks on, which, once you’ve identified the mask with your telescope, can be crafted and worn in order to assume control of that body.

Crafting the masks is fairly basic at first, as more often than not you’re dipping a mask in a single color and attaching a few different components you find throughout the different realms to complete the designs. It’s still oddly therapeutic, chiseling away a block of wood and seeing it take the form of your basic mask template, or taking a step back to appreciate the finished product as its eyes magically glow to life, opening up a whole new avenue for you to explore this magical world.

However, it was in the second half of the game once more where you’re given paintbrushes and even more mask templates that the mechanic really reaches its full potential. Combining different components and various colors to make more elaborate designs could be a game in and of itself, and I wish there were even more challenging masks to make than those you’re tasked with crafting by the very end.

I’d have loved to have seen a mask creator mode with free reign to make intricate and eccentric designs and share them with friends to design themselves would have been great, though this admittedly may be too much of an ask for the small team at Innerspace VR.

The bodies wearing these masks may enable you to access an area of a realm you previously couldn’t reach because of an enormous chasm, or pesky fencing that forces you into utilizing your Maskmaking craft. Switching between masks when playing on PC saw me immediately teleport into the new body, with non-existent loading times.

Pulling off one mask and being transported to your workshop, before swiftly putting another on and returning to the realm in a different area is so seamless and makes the whole experience feel that little bit more magical and immersive. It’s this kind of mechanic in the game that just wouldn’t have the same impact playing on a TV with a controller.

In the first half of the game, however, these puzzles are very basic, and things only really ramp up slightly in difficulty in the latter half. It was only right towards the end I found myself having to spend a little more time to sit back and find the solution.

Having to grab two handles on a furnace to control the pressure for example, pumping with one arm and releasing pressure by holding down the other was a fairly simple ‘puzzle’ to solve, and this came after the halfway point. A particular highlight was an area which required me to guide water through a maze-like system of gates had me traipsing back and forward trying to figure out where I’d gone wrong and how I could reach the different valves I needed to without sending the water the other way.

Watching the water gush back out to sea so I could venture out on my boat to the island in the distance was satisfying after racking my brains, I only wish there were more like this earlier on in the game, as for the most part, it’s a walk in an enchanted park.

Maskmaker, unfortunately, falls short when it comes to actually collecting the various objects to make the different masks. While some were neatly tucked away, others were so obtusely hidden that I spent far longer than I should have done going back and forth through the relatively small area each mask allows you to explore in search of them.

One particularly annoying object required you to find a six-headed part of a plant. There was only one of them on the six or seven bushes in the area, but plenty with two or three heads. I picked up countless of these before finally, accidentally stumbling on the one I needed to craft the mask.

There was no hint that I was on the right track, and I had more or less disregarded the plants having picked off countless parts of it to no avail.

Had I not been driven to finish the game to write this review, I could see myself giving up in some instances. I’m glad I pushed through to the end, but once I’d finally got around these temporary roadblocks, there wasn’t the same sense of satisfaction as there was when I was successfully switched between masks up in a forest canopy to kill off a fungus in different places before it grew back, or solved the aforementioned water puzzle. I just felt the game didn’t really value my time.

As such, finding these mask components felt more of a chore than it really should have, and given this was a fairly significant chunk of the game, discovering one was met with a sense of relief that it was over for a little while longer and I could return to the workshop to refine my craft further, or that another intuitive puzzle may be in store.

Similarly, there were some times where the game doesn’t really explain what you should be doing next. It’ll tell you you need to reach an objective, but doesn’t even hint at how you’re supposed to go about doing it. It led to a lot of walking around aimlessly, desperately picking up everything I could and switching between masks in the hope Prospero would provide a helpful clue. More often than not, he’d just retort the same, vague one-liners instead.

The longer I had to spend idly walking around the areas, the varying quality of the environments in Maskmaker became more obvious. In its opening realms, the game’s art style encapsulates the magical feeling that the story and the world are so desperately trying to convey. However, by the end, I did notice some muddy and low-quality textures which detracted from the immersion and reminded me I was playing a VR game… wildly swinging my arms about or on the cusp of stroking my sofa while trying to piece together a snake statue, much to my girlfriend’s amusement.

This might all sound like I didn’t enjoy Maskmaker, but on the contrary, I finished the game and found myself wishing there was a little bit more. Another realm or two to really put my maskmaking and puzzle-solving skills to the test, without the finicky object collecting or obtuse directions.

When Maskmaker shines, it shines bright to the point I had a beaming smile on my face. It’s just a shame these moments only tend to pop up towards the very end. If you’re looking for a circa five-hour VR adventure with some magical moments, you could do worse. Just don’t expect a groundbreaking VR experience.