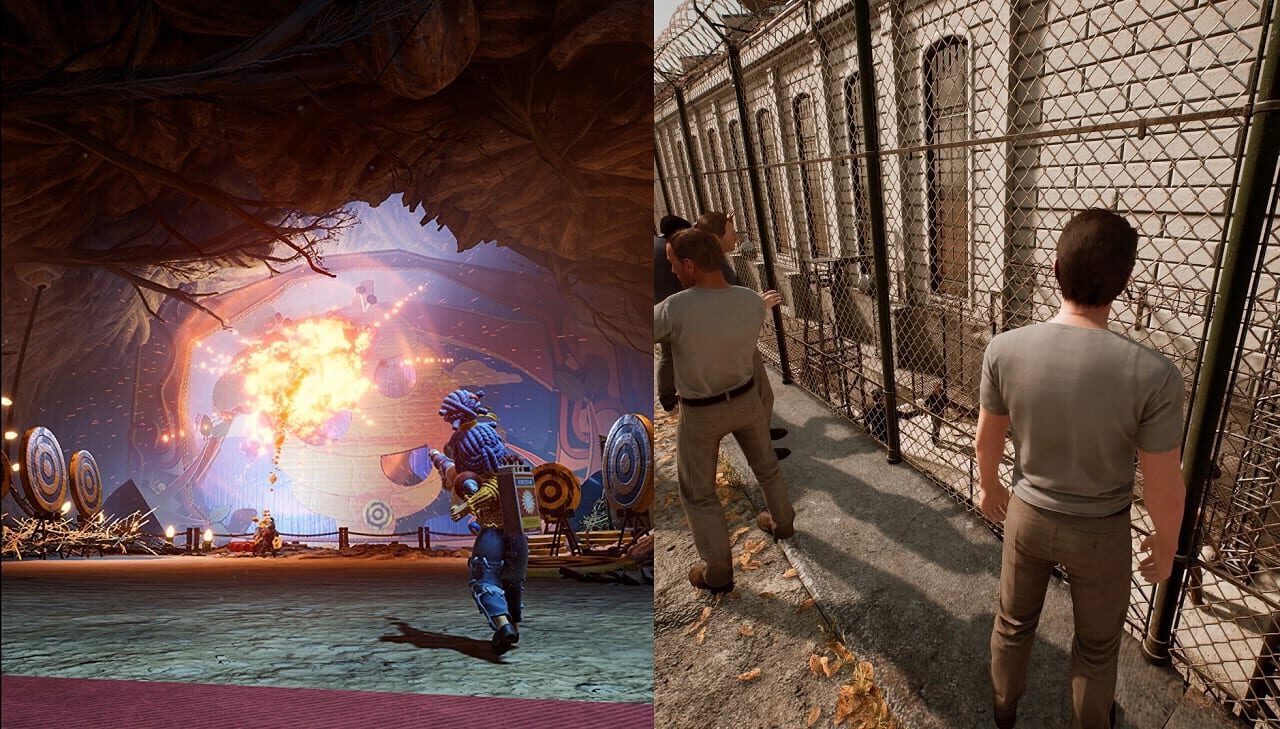 Hazelight Studios is quickly developing quite the reputation for creating amazing couch co-op games. As you can see in each of our reviews, A Way Out and It Takes Two have both thrived, delivering two cooperative experiences unlike any other.

To celebrate that success, we decided to compare the two with multiple different categories, seeing which one’s story, gameplay, and replayability wins out. With that said, it is time to settle which couch co-op game is better: It Takes Two or A Way Out.

A Way Out is all about two prisoners trying to escape from jail, while It Takes Two follows a soon-to-be-divorced couple trying to get their bodies back. When it comes down to it, though, each is a tale about working together – though there are considerable differences regarding the history behind each relationship.

When Leo and Vincent meet in A Way Out, they are two complete strangers who happened to get sent to the infirmary at the same time. They eventually agree to help each other escape, forcing them to work together and get to know each other.

A bond soon forms, as they work together so flawlessly and joke around to the point where you’d think they’ve known each other for years.

It Takes Two starts from a considerably different point in the main character’s relationship, as May and Cody have been together romantically for years. The story immediately picks up at a point where they are talking about getting divorced.

When they tell their daughter, Rose, about the looming split, they are shocked to find themselves transported into the bodies of miniature dolls by a wish from their daughter. What follows is a tale of rediscovery as the couple realizes why they fell for each other in the first place, working as one to overcome symbolic trials in a dreamscape world.

While both stories have meaningful messages and great characters, this one goes to A Way Out. On top of the fact that their relationship tells a less contrived story, the way that Vincent and Leo’s tale ends is enough to give it the victory in this category all by itself.

Winner: A Way Out

Since both titles are designed for couch co-op experiences, their gameplay follows a similar structure. Timing and communication are key in each game if you and your partner want to progress. With that said, there are some key differences that help one stand out over the other.

Like many action-adventure games, A Way Out features plenty of driving and shooting sections that give each player agency as long as they keep the other alive, albeit in a linear way.

Where it differs can be found in the bevy of situations that Vincent and Leo find themselves in which require stealth or cooperation. For example, there is a section where Vincent needs to distract a nurse and guard so that the player controlling Leo can find the chisel they’ll use for their escape.

Each person has to actively engage in the gameplay, even if it is as simple as making sure they distract who they’re supposed to at the right time.

However, timing and communication are even more important in It Takes Two, but in different ways. The gameplay in this title is far more varied and fast-paced, as May and Cody run through seven levels; each filled with unique designs, mechanics, and abilities.

Depending on which character you control, you’ll need to use your specific powers to help your partner in completing plenty of different platforming, puzzle, and combat sections. On top of all of this, there are also a lot of cute little minigames spread throughout, allowing you to compete against each other for bragging rights.

While the sneaking and timing of A Way Out can result in a lot of tense moments, it simply doesn’t compare to the puzzles, platforming, and unique abilities that It Takes Two boasts. Honestly, this one isn’t even close.

While they may both run shorter than most games nowadays, there is actually a pretty large disparity in terms of replayability when comparing A Way Out and It Takes Two. One title offers a lot of it, while the other simply lets you relive the same situation with a different character.

In It Takes Two, you’ll have the option of switching between playing either May or Cody whenever you want. While that might seem like a simple character design swap, it is important to remember that each one has different abilities throughout most of the levels.

This means that you’ll experience the same level differently if you play as the opposite character on a second playthrough of it.

Controlling Cody in the Shed, for example, is a vastly different experience compared to controlling May. The former acts more as the conductor, setting up puzzles with his nail. The latter is the one who takes action, swinging off the nails and platforming around.

You also have a lot of replayability with It Takes Two’s minigames. You can replay any of the 25 minigames unlocked throughout the game in the main menu at any time. The best part is that you can even keep a running tally of who has won the most, adding an extra layer of competition.

In comparison, choosing to play as Vincent vs Leo when going through a second run of A Way Out will alter some situations, but not too drastically. The main thing you’ll find that is different on a second playthrough is that there are two distinct endings that can be unlocked.

This is another situation where the variety of It Takes Two simply dominates A Way Out. It’s literally designed with multiple playthroughs in mind.

That doesn’t mean we don’t want to get the multiple endings that come with Vincent and Leo’s great story; it just means that we will still likely spend less time playing it, especially since it’s about half of It Takes Two’s overall runtime anyway.

While both games are certainly amazing co-op experiences in their own right, the gameplay and replayability that comes with It Takes Two simply couldn’t be matched.

A Way Out definitely puts up a good fight with fun stealth elements and an impactful story, but it just doesn’t have what it takes to match up to the newer Hazelight Studios title.

Honestly, though, both games are worth your time, as they each provide a great couch co-op experience that you and a friend or loved one won’t forget any time soon.