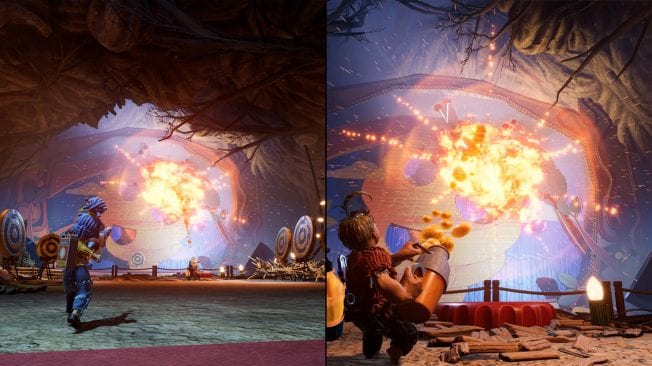 It Takes Two is here and if you’re looking for more co-op content in the vein of A Way Out you won’t need to worry. It Takes Two ups the ante with more action-based gameplay in addition to featuring a compelling narrative. If you’re here, you might be having trouble with the game’s first boss, The Hoover. Here’s our guide for how to beat The Hoover in It Takes Two.

How to Beat The Hoover in It Takes Two

The Hoover will be the first boss you come across in It Takes Two. It may come as a bit of a surprise for fans of A Way Out that were used to more narrative-driven gameplay but, that said, it’s a very manageable battle.

The fight isn’t too difficult and most of The Hoover’s attacks are slow and telegraphed enough to where you should be able to just jump or dodge out of the way assuming you’re not napping. If you’re having trouble, though, just pay attention to The Hoover’s attacks and learn the patterns.

The two main attacks are a ground pound wave that you’ll need to jump over before it hits you, and a mine area of effect attack that you should be able to dodge away from into a space that isn’t covered by the mines.

You’ll be able to damage The Hoover every time it fires out its explosive cylinders. When they appear, you can control two different vacuums by pressing Triangle on PlayStation and Y on Xbox.

Whoever is controlling the top level simply needs to aim their hose at The Hoover while the bottom level needs to focus on sucking up the cylinders. Keep firing them at The Hoover until all the health is gone and you’ll have won this first boss battle.

That’s all you need to know for how to beat The Hoover in It Takes Two. For more guides, visit our It Takes Two wiki, or see more of our coverage below.