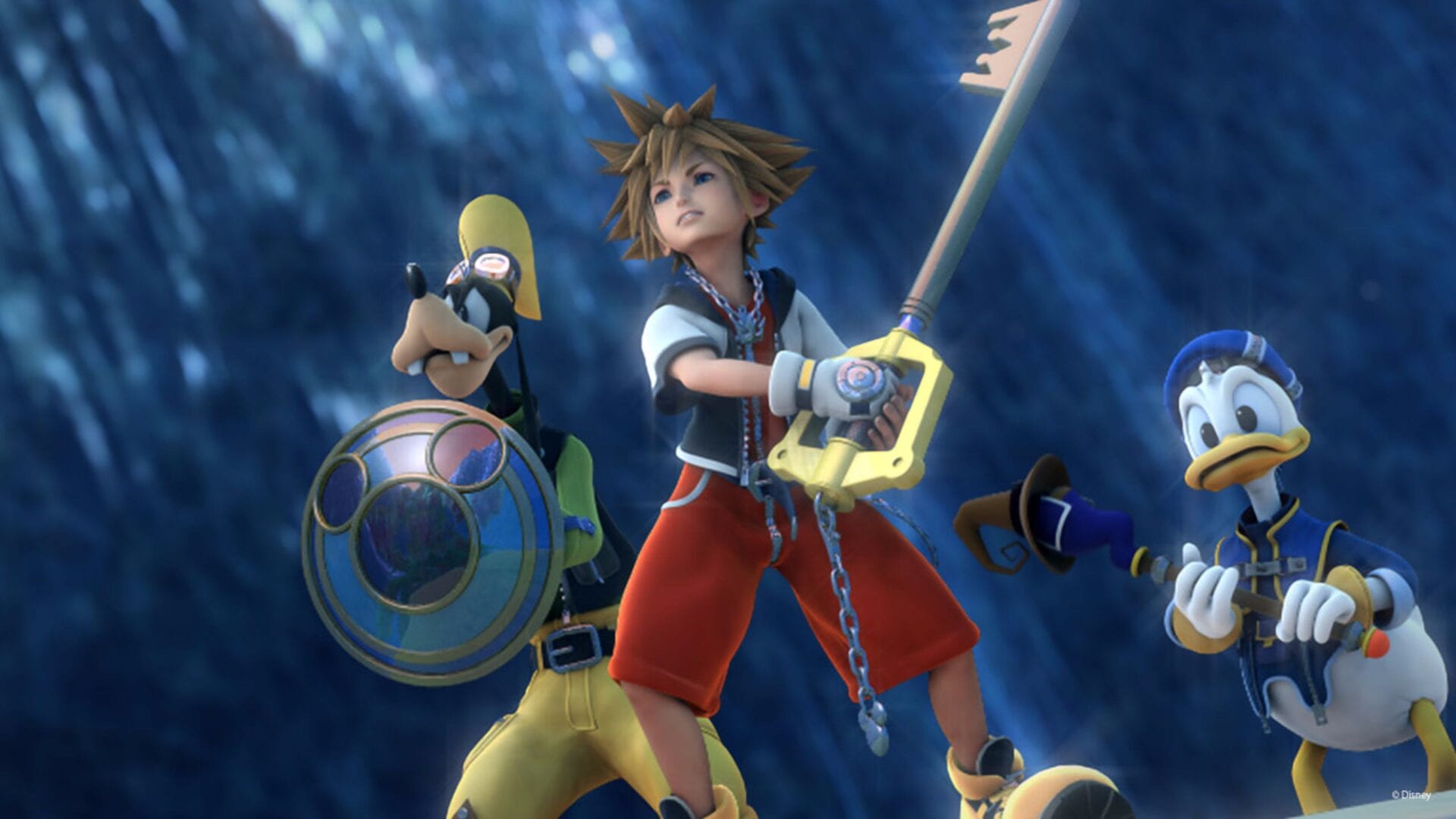 The Kingdom Hearts franchise is finally on PC, so the only natural thing to do is celebrate this momentous occasion with a bunch of wallpapers featuring characters from the almost 20-year-old franchise. Enjoy and don’t forget to download a few of these Kingdom Hearts wallpapers for your own collection.

Even though this one from WallpaperTip is an oldie, it’s a classic that absolutely needs to be included. It has the fantastic Nomura art of Sora, Kairi, Riku, Goofy, and Donald.

Best of all, it perfectly fits the aesthetic of people who prefer to use the dark theme on their computer. Download this wallpaper here.

While this one is technically a screenshot of a YouTube video by user PoloGeist, but it’s still a solid wallpaper. The original Chain of Memories box art is one of the coolest drawings of Sora.

Unfortunately, it’s one of the less popular Kingdom Hearts games so it’s pretty tough to find a super high-resolution wallpaper. You can find the HD version here.

WallpaperAccess captured this classic shot from the intro cinematic of Kingdom Hearts 2 and it still looks incredible to this day. And even though this image is just a screenshot of the game’s intro, it still one of the best wallpapers out there that any Kingdom Hearts fan would love to have on their desktop.

You can add this stunning 4K wallpaper to your collection right here.

The artists at Square Enix who make these super high detailed images for Kingdom Hearts deserve a raise. This classic image featuring the characters in their Kingdom Hearts 2 attire makes for a beautiful PC wallpaper. You can download it here.

The Kingdom Hearts 3 intro video was something fans of the franchise patiently waited over 10 years to finally see. And it didn’t disappoint.

Wallpaper Abyss captured one of the coolest shots of Young Xehanort playing this chess-like board game with bolts of lightning flashing in the background. Now you can add this iconic Kingdom Hearts scene to your collection of wallpapers right here.

This wallpaper created by Reddit user LionCerials was inspired by the PS4 theme you got for pre-ordering the Kingdom Hearts 3 Re Mind DLC. And you’ll likely now recognize it as the title screen if you downloaded that expansion.

It also makes for a beautiful PC wallpaper that you can download right here.

Nomura’s style is timeless and the art of the key characters from Kingdom Hearts 2 is a perfect example of that. Better yet, there’s not a single major character missing from this image from WallpaperAccess.

The pure amount of Kingdom Hearts nostalgia in this single image makes it one of the best wallpapers you can find. This work of art can be downloaded right here.

This image from WallpaperAccess mixes different games and characters, but it’s a fantastic celebration of what makes Kingdom Hearts great. The protagonists are all easy to like and this wallpaper that tosses them all together (sans the Birth By Sleep crew) into one image that can be downloaded right here.

Finally, the Birth By Sleep protagonists get to be featured in this wallpaper from WallpaperAccess. While this image features art of Terra, Ventus, and Aqua isn’t from their original title, it’s still amazing to see for anyone who was a fan of Birth By Sleep.

This image of all three characters makes for a truly stunning wallpaper that can be downloaded right here.

Finally, we come to the Kingdom Hearts 3 box art that can be found on Wallpaper Abyss. It’s one of the most stunning and eye-catching images that you’ll see on any cover in the franchise.

And that naturally makes it one of the most important wallpapers for Kingdom Hearts fans to have. You can add it to your collection here.