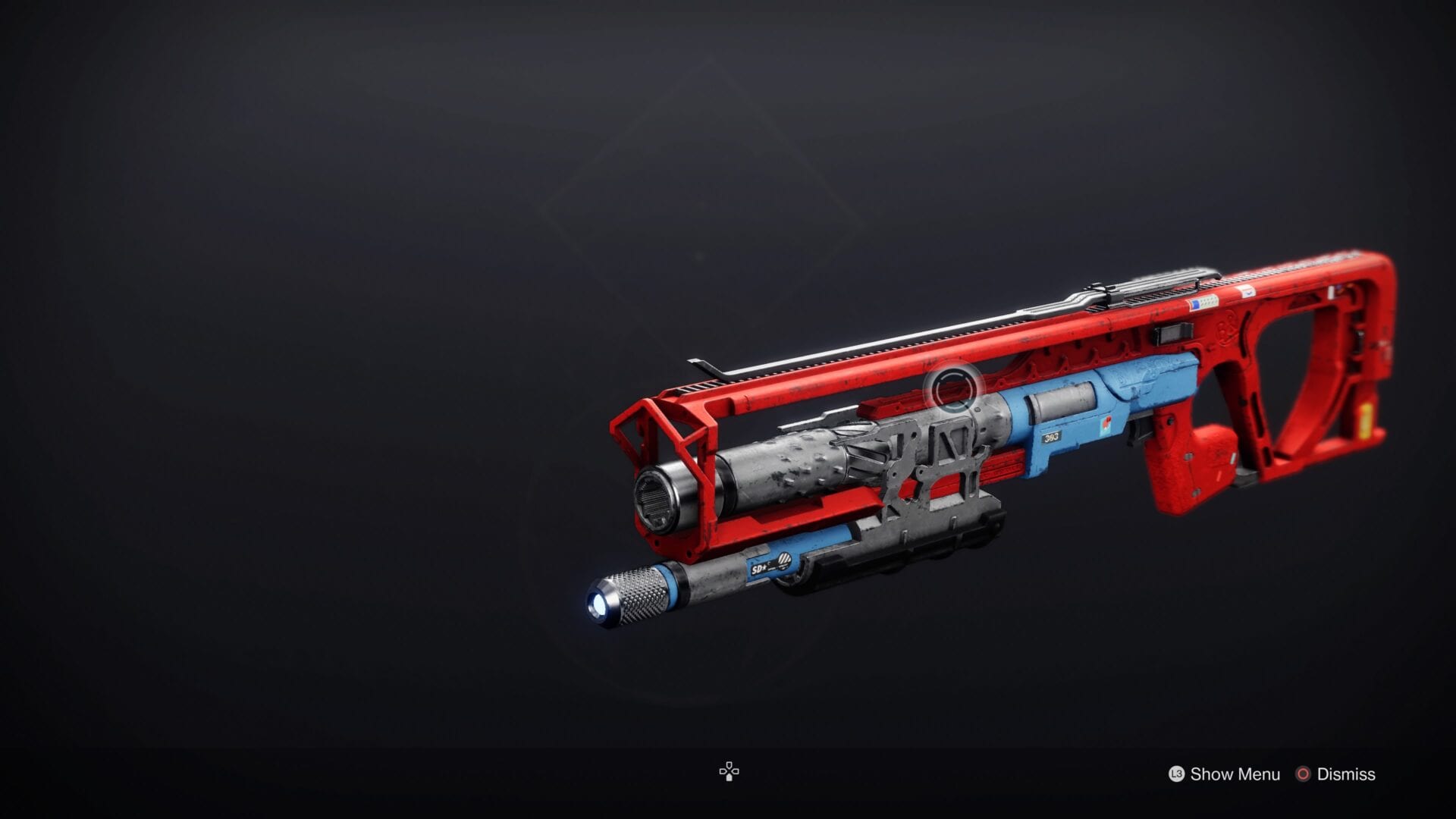 Let’s start this list of the best new Destiny 2: Beyond Light legendary weapons with a solid one. Stars in Shadows is a solar energy High-Impact frame pulse rifle with a lot of possible perk combinations.

I personally enjoy high-impact pulses in PvP more than PvE, and tend to not use my abilities often. So, a perk combo I would look for is something like: Accurized Rounds, Kill Clip and Surplus, and a new perk that increases handling speed, reload speed, and stability for each charged ability.

Stars in Shadows can also roll with ol’ reliable: Outlaw and Kill Clip, which is rare these days and is a great combo in both PvE and PvP if you want to keep things simple.

Deafening Whisper joins Martyr’s Retribution as the only Wave Frame grenade launchers in the game. Wave Frames are natural add clearers and have a spot in any build that revolves around clearing out groups of enemies.

What sets Deafening Whisper apart from Martyr’s Retribution is a different energy type (void) and a lot of new and interesting perk combinations.

Ambitious Assassin is a really nice perk to have on a Wave Frame as it gives you the potential to shoot twice instead of just once. It can also pick up Rampage and the new perk, Wellspring, which will help you recharge your abilities as you take enemies out.

Adored, AKA totally not Beloved with a cloth on it, slides right into the PvP sniping scene. With so many great sniper rifles being sunset, expect it to be a popular pick for snipers when Trials of Osiris starts back up.

This is an arc, Adaptive Frame, pursuit weapon so you have two perk options per slot, and it gives you a nice option for both PvP and PvE play.

If you’re going with PvP, nab Killing Wind and Snapshot. If you’re going PvE, Vorpal Weapon and Triple Tap is the play. The PvE combo is quite nice if snipers are the choice for a tough boss encounter.

Unfortunately, Vorpal Weapon and Snapshot are in the same column, so no mixing and matching that in PvP for the people that like Vorpal for killing super-charged foes.

I’m personally a big fan of Rapid Frame shotguns for their ability to quickly work their way through trash enemies, but also put a hurting on majors with their tendency to, well, rapidly pump out shots.

Xenoclast IV is a new Rapid Frame arc shotgun that comes with everything you need to accomplish that role. Badlander was one of my favorite weapons from the Forsaken-era, and Xenoclast IV gives me some similar vibes.

You have a choice of three really nice ammo-related perks in one column with Grave Robber, Auto-loading Holster, and Field Prep (depending on your tastes). Then, you can match that with One-Two Punch or Trench Barrel, again whatever suits your fancy. Solid gun, with solid perks.

Arctic Haze has a lot of interesting things going on with it. First off, it’s a solar Rapid Frame 720 RPM auto rifle, which sets it apart these days.

Next, like most of the new Beyond Light legendaries on this list, it has some really interesting perk combinations. First off, it’s one of the few newer guns that can carry Kill Clip and Outlaw. You can’t go wrong with that.

But it also comes with a new perk, Thresh, which generates Super energy for you on kills. You can pair that with something like Surplus if you wanted to keep those abilities charged and reap the benefits until you need to burn your super.

You could also do some other fun PvE combinations like Dragonfly and Feeding Frenzy or Subsistence. Quite a few options there, especially for PvE. As long as you like using 720 RPM auto rifles, Artic Haze has a lot of fun things you can slap on it.

This shotgun is a bit different from the Xenophage IV. Bonechiller is a Precision Frame shotgun, which is a nice archetype to be in right now as it’s quite effective in both PvE and PvP assuming you have the skill to use it properly.

Bonechiller has really perk rolls for both PvP and PvE. In PvP it’s fairly simple: Slideways and Firmly Planted. They are peanut butter and jelly, and you can’t go wrong with it. If you’re not a slider, go ahead and swap Slideways for Opening Shot instead.

In PvE, the play may to be mix in the new perk, One for All, which boosts your damage for a moderate duration after landing damage on three different enemies.

While I personally haven’t gotten this roll yet, YouTubers have done some experimenting and it seems to be very effective on Bonechiller especially when paired alongside Triple Tap which will allow gain some bonus shots for landing precision shots. Check it out for yourself here via Ehroar.

Yes, Rocket Launchers are kind of a meme right now in PvE, but when and if there’s a time and place for it, Subzero Salvo is one that you’ll want to have ready to go.

I don’t love Subzero Salvo for PvP, there are better RLs out there if you want to be the “rocket man.” It’s PvE where Subzero Salvo can shine with the perk combination of Chain Reaction and Ambitious Assassin.

Because it’s a precision frame (arc damage), you innately got tracking on it, which is always nice if your aim sucks. However, I see this as a weapon where you can fire off a rocket into a group of enemies, score some elemental explosions with Chain Reaction, hopefully wrack up enough kills to get an extra shot next time around with Ambitious Assassin and keep shots coming.

Again, rockets are in a weird place right now, but if there’s one to shout out for PvE, Subzero Salvo is it.

That’s all we got for the best new legendary weapons added in Destiny 2: Beyond Light. Once the new raid comes out, we’ll definitely circle back around to see if any of the new Deep Stone Crypt weapons make the list.

For more on Year 4 of Destiny 2 and Season of the Hunt, check out our Beyond Light wiki guide which has even more helpful tips and tricks.