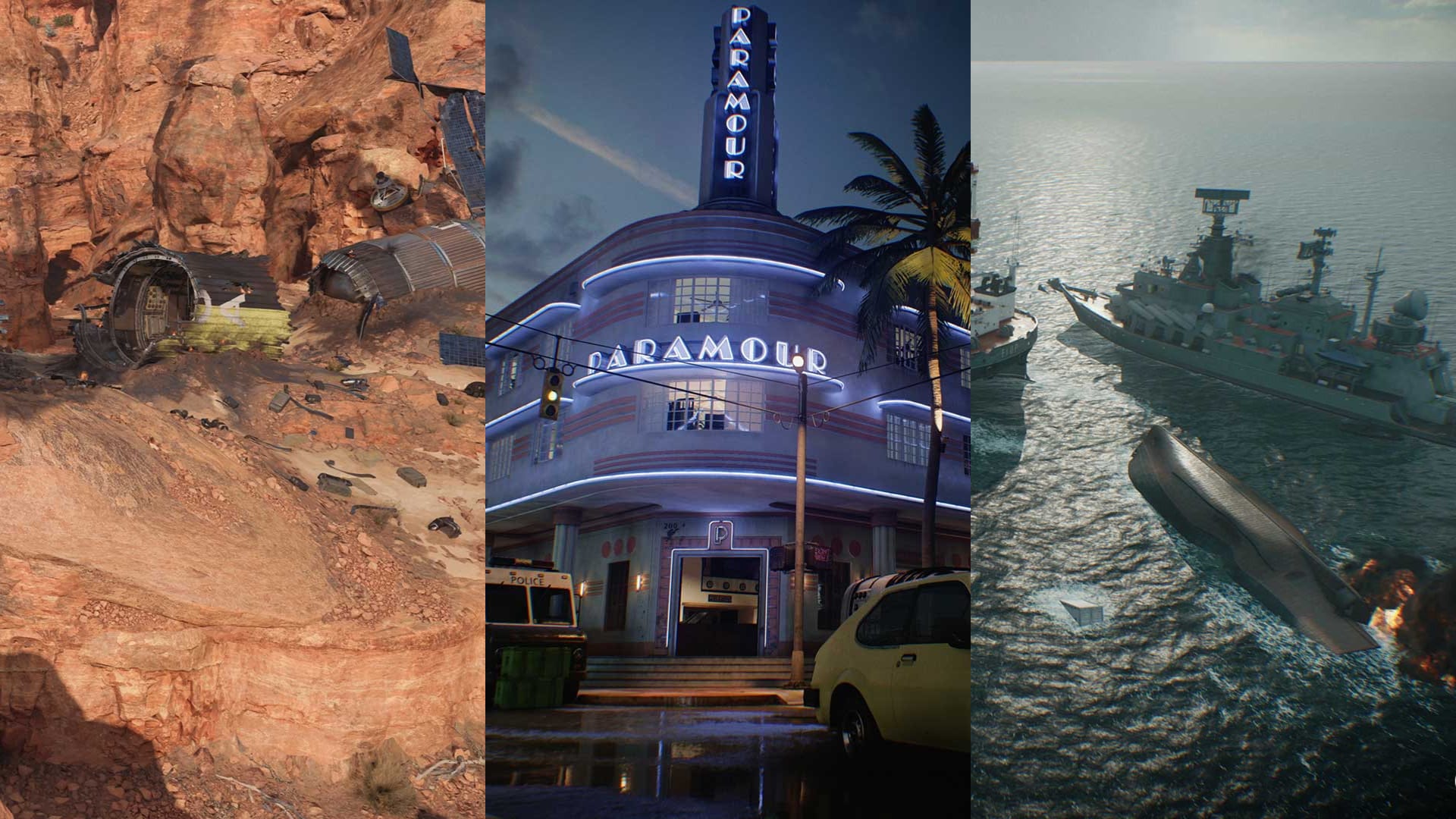 The standard multiplayer is almost always the most popular mode in every Call of Duty game. How much staying power the mode has is often down to how good the maps are though, with the series struggling in that department over the last few years. Now that we’ve had some time with the game, here’s our rundown of all Black Ops Cold War multiplayer maps, ranked.

Satellite is a strange map. It almost feels like one you’d expect to see in Star Wars Battlefront, and not just due to its desert setting. The issues arrive from it being essentially split vertically down the middle in terms of terrain.

On one side you have tight caves on either side of the hill that the crashed satellite sits on, and on the other, you have wide open dunes. While that does allow for various tactics in terms of weapon use, it causes bottlenecks around the satellite itself.

Enemies will camp in the openings in the satellite itself, there’s too much vertically in the middle area, and it can turn into a frag fest when the action’s funneled into it.

It doesn’t help that the limited spawn options cause frequent issues too, seeing teams get trapped in their spawn for too long.

Garrison takes place in a military vehicle storage facility but the design funnels the action into two places. The raised outpost on one side and lower walkway on the other (including the small tunnels underneath the latter) are where all the action takes place. All of it.

Very rarely will you get into sustained firefights in the central area. Not because it’s too open and visible from the other side, but because venturing into it leaves you with few options of where to go once you get past the central overhead walkway.

Limiting action to just a couple of places makes rounds on Garrison really dull at times unless the objectives moves you away.

Checkmate is very similar to Garrison in design and layout, but slightly bigger and more open. You’ll still attack from one end of a hangar to another, but this one has a private plane acting as the central point.

Being a bit more open does allow for the action to be spread across the map a little more, but the abundance of blocks and barriers increases the number of camping opportunities. It’s not a terrible one for capture-based objectives though, with most of the points being pretty open.

Miami is probably the Black Ops Cold War map that’s been shown off the most and I get why. It’s probably the best-looking map of the lot, with the deep purples of the neon signs illuminating the open areas between the hotels.

However, pretty settings don’t necessarily make for a good map. Miami’s darkness is one issue, which makes it tough to see enemies in the more open street area, but it’s the addition of a couple of areas that make Miami frustrating.

The balcony at one end of the main street always has someone on it, as does the bar area in the top of the building (Paramour) on the corner. That causes the action to be funneled through these areas, leaving the large central area pretty open. It’s also easy to get caught in your spawn if you start at the large hotel end.

Cartel is a strange one and I find myself enjoying it in one game and hating it in the next. It lacks verticality somewhat, which is nice, but there are still loads of places to hide.

When the action goes around the outer edges of the map, either in the ravine or the warehouse, it can be fun, but when a mode like Domination forces you centrally, you’ll be frustrated.

It becomes a grenade and shotgun hotspot and overly hectic, which isn’t fun at all. You can’t see people through the crop field there, so it’s just a case of fire and hope, which is horrible to play in some of the modes.

The standard Armada map (the single boat variant not in Combined Arms) is a more traditional map and makes for great fun in Search & Destroy. The windows from the main section of the boat, which looks over onto each spawn point, can be annoying when people stay there, but there are plenty of ways to get behind them thankfully.

The action does funnel into the two walkways that go below deck on either side of the map, but it’s mostly well designed.

While you’re unlikely to use them much, it’s also cool that Armada shows off Black Ops Cold War’s new swimming mechanics as well.

Nuketown is a fan favorite for a reason. It’s not the best of the classic Call of duty maps, but it’ll always be an icon of Black Ops.

The small scale, hectic central road, and enjoyable tight section around each house make for fast-paced rounds. While the central area is chaotic, there are places to hide and various lines of sight that you can take advantage of. It’s not just an open area that you need to avoid.

The upstairs windows in each house can be frustrating as people camp in them, but Nuketown is small enough that a cheeky grenade throw is enough to take them out. The ’84 theme of Nuketown in Black Ops Cold War is great too.

Moscow isn’t everyone’s favorite, but it’s generally a well-designed and fun map to play on. The central area, in the larger room, can be frustrating to get caught in as enemies come from the glass surrounded bar end of the map and down the escalators. There’s nowhere to hide and four different ways to enter the room.

Keep away from there though and you’ll have a lot of fun. The rooms are enclosed but don’t overly benefit campers. You need to move towards the central areas of the map to get involved in the action, with the spawn points being pretty cut off from the rest of the map.

The map’s quite wide though, ensuring that the centrals areas aren’t overly chaotic and the spawn points remain safe.

Crossroads stands out from the rest of the pack somewhat. It’s unlike most maps you’ll see in modern Call of Duty games, limiting vertically and going back to run and gun small locations.

There’s one walkway that looks over part of the map, but otherwise, it’s all pretty much on one level, which is great considering how fast-paced it generally is.

Each section is also pretty separated, limited the issues with grenade spam on most modes. I’ve had issues with being killed moments after spawning, as you will on most maps, but it’s great as a throwback to maps of old.

Grab an MP5 and run into the middle to see what you can do. That’s what Call of Duty used to be about and it’s a welcome addition to Black Ops Cold War.