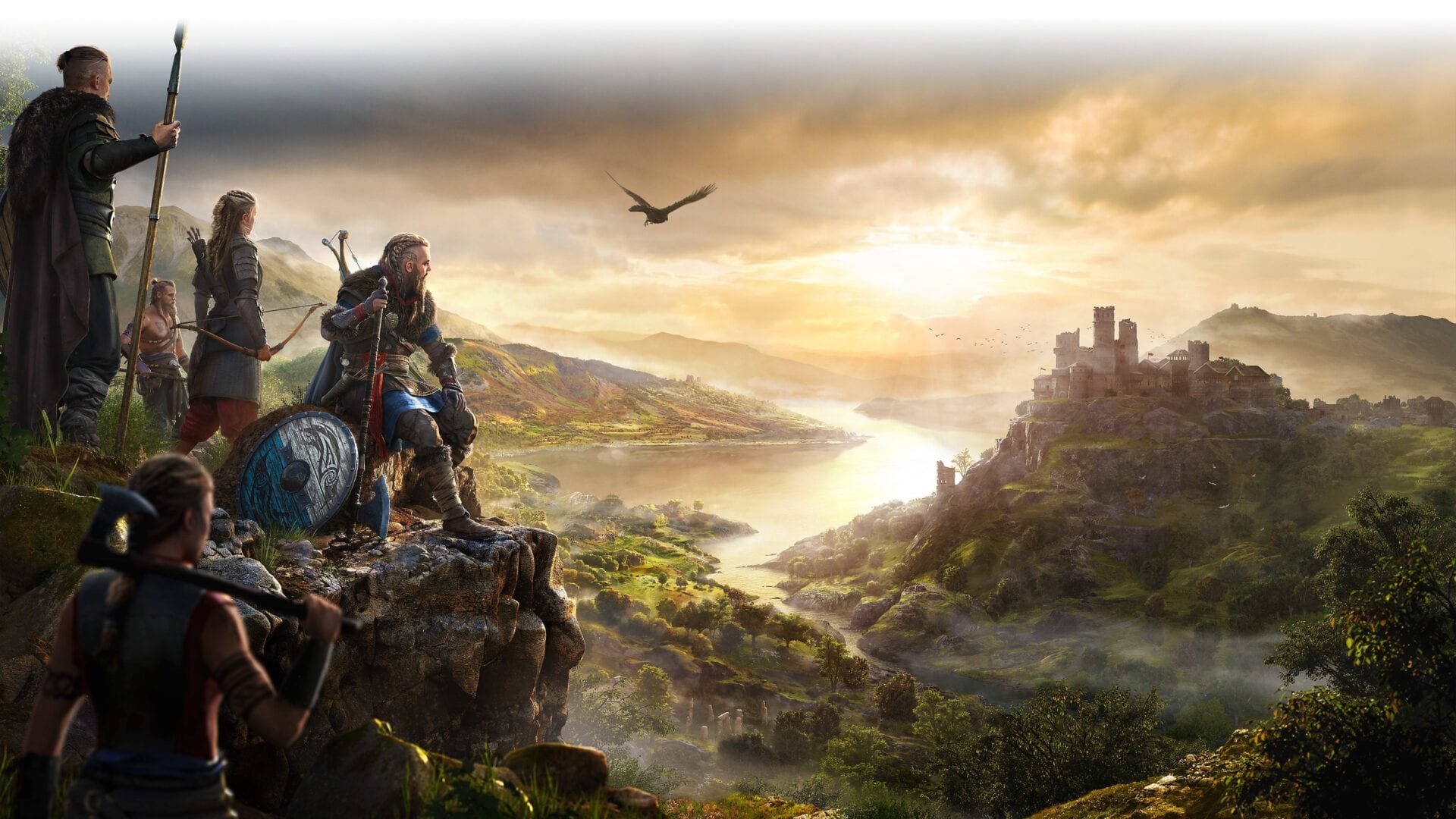 Assassin’s Creed: Valhalla is the latest entry in Ubisoft’s long-running historical simulation series. While the AC games are certainly inspired by history, they oftentimes play fast and loose with some of the more granular historical details. It’s something we spotlighted earlier this year after Valhalla’s big reveal, and we’re returning once again for another look having now played through the entire game.

A few disclaimers before we begin, though. It should go without saying, but the sci-fi, mythological and specifically mechanical aspects of Valhalla are not what we are talking about here (Hidden Blade included). I mean, I personally wish the Animus was a real thing, but unfortunately, we as a society are not quite there yet, technologically speaking.

An aspect that Valhalla does remarkably well, as opposed to a lot of other media, is the proper usage of the correct names and terms of the era.

“Viking”, for example, actually means the act of raiding and pillaging, whereas “Vikingr” would refer specifically to a member of such a raiding party. Norse, Danes, Northmen, or Heathens were other names by which these people were known (who were not unified in the manner of, say, the Saxons of England) depending on who was speaking, but we will use the more widely recognized term Viking here for the sake of simplicity.

Finally, as is sadly too often the case with history, we should add the caveat that there is infinitely more that we don’t know about the people we now call Vikings than we ever will. The records and fragments that historians work off of from the Viking Age (793-1066 CE) were either written after the period, or by literate Christians of the era, and it’s hard to imagine bias not clouding their minds, considering the treatment they received at their subjects’ hands!

The Lack of Swords (for Eivor)

Something that players will inevitably realize (I’m embarrassed to say it took dozens of hours in my case) is that in Valhalla, Eivor is entirely unable to equip one-handed swords. There is not a single one you can acquire in the whole game, which is very odd for an RPG (especially set during this time period), although you are able to temporarily take one from an enemy as part of a finishing animation.

This is pretty strange and doesn’t make a whole lot of sense. As the child of a jarl, and later the ward of a king, owning a fine sword would have been an important status symbol for Eivor as a member of the Norse aristocracy, setting them apart from the rank and file.

Swords were highly prized weapons in Norse culture, often being buried with their wielders, and while expensive, were not prohibitively so. A Viking that had taken part in a successful raid would have been able to afford one… if one without ornamentation. The Laxdæla Saga lists a sword as costing a half-crown, worth roughly as much as 16 milk cows (which is a fact I learned, and now you have to).

It’s interesting, then, that everyone except Eivor seems to have one. Kjotve’s men in Norway all have them, Saxon troops have them as well (although iron was more plentiful in England). It can’t be budgetary restraints on Ubisoft’s part either, as the animations already exist in the game. And while you can get two-handed swords, they present an entirely different kind of issue.

While most of the various axes and spears that you as the player will use to terrorize the people of England are period-appropriate, some of the weapons that make up Eivor’s armory are a little more suspect.

As mentioned, two-handed swords like the Doppelhander are entirely anachronistic during the period in which Valhalla takes place, as such long-bladed weapons weren’t used until the Late Middle Ages (1250-1500 CE). This kind of weapon would have been used more like a spear in actual use, a thrusting weapon as opposed to the wild slashes depicted in most video games.

Similarly, flails like the Iron-Star are around 150 years too early to the party, and historians think their use must have been exceedingly rare, even during the later Middle Ages. The unwieldy nature of the weapon, despite its fearsome appearance, would make it too much of a gamble to use on the battlefield in reality.

The inclusion of the Galloglaich set of armor is also ahistorical. This armor was worn by the famous Gallowglass mercenaries, of Norse-Gael heritage, but would not be seen on the shores of England until at least the 13th century.

The prevalence of chainmail too, amongst both Vikings and Saxon foot soldiers in Valhalla, would also have been unlikely, but this is a pretty common historical media sin. Such armor would have been incredibly expensive, as making it was a complicated and time-consuming process, and thus reserved for the nobility.

The image of the wild-haired, blood spattered Viking, wrapped in stinking furs, is an enduring one, and it’s a depiction that Valhalla trafficks in as well. Similarly, the inhabitants of England are shown as civilized and sometimes effete, for better contrast. It’s an unfair depiction, but understandable, considering the kinds of activities Vikings engaged in, and who it was that wrote the history books.

From the archeological evidence we have, the truth is more likely that personal grooming was an important aspect of Viking culture. Combs, razors, tweezers, and ear spoons are items that were often buried with both men and women, and evidence of bars of very strong soap has also been found.

Saxons of the time might have even considered the Vikings to be clean freaks, as there are accounts of them washing regularly (at least in comparison to early Christians), and combing their hair and beards daily. In fact, in modern-day Scandinavia, Saturday is still called lördag, which is derived from an Old Norse word that means “bath-day”.

The Prevalence of Female Vikings

I hate to be that guy, but women couldn’t be Vikingr… specifically, because the term”Vikingr” was a masculine one, exclusively applied to men! That doesn’t mean that there wasn’t evidence of female warriors, and even famous ones, during this period, just that the term, in particular, would be incorrectly used to describe them. In fact, historians have recently uncovered more evidence of female warriors in recent years, changing long-held and pre-conceived notions of the role of women in ancient societies.

Women enjoyed an impressive amount of freedom in Norse culture, if only in comparison to other peoples of the period. While a patriarchal society at its core, Norse women had some rights, could own property, and even divorce an unsatisfactory husband if they so chose. While that might sound grim to modern ears, it was positively egalitarian compared to the plight of women in contemporary cultures of the era.

They would not, however, have likely gone raiding with the men-folk in the numbers depicted in Valhalla, or at least we don’t yet have evidence to support the theory. Women were expected to continue the work of the men during the raiding season (in addition to their own), which included agriculture, construction, fishing, and the crafting of trade goods.

The evidence we have of real-life shield-maidens, the legendary warrior women of the Norse, have all been located in Scandinavia, the site at Birka being the most famous (which was reexamined in a more recent paper). Originally thought to be the tomb of a male warrior, DNA proved the occupant was female, buried with a full panoply of arms and armor. This begs the question: how many other presumed male tombs might, in fact, contain women?

The geography of the evidence we have indicates that a female warrior, for example, the lady of the house, would likely have been entrusted with the defense of the homeland during the raiding season, perhaps against less scrupulous opportunists, in the manner of the Onna-Bugeisha samurai of feudal Japan.

In Valhalla, female and male Norse warriors appear at about equal parity (especially in Norway), and the Vikings that makeup Eivor’s own longship crew is equally diverse. While fearsome characters like Soma and Randvi are some of the best written in the game, the prevalence of so many female Vikings abroad is most likely artistic license on the part of Ubisoft Montreal.

The Benevolence of Eivor, and the Vikings in General

This is a subject I wrote about in-depth pre-release before we had much more to go on than a few trailers and comments made in interviews. After playing the game quite extensively, though, I can say that Valhalla’s tone isn’t quite what I had expected. It’s actually quite bizarre.

I was pretty excited to see Vikings portrayed in all their savage glory. Eivor and their crew are a brutal bunch, never shying away from a little bloodshed. But, as it turns out, they are actually… kind of nice.

Rather than seeing them as harbingers of the apocalypse (as was the case in real life), the Saxons in Valhalla are strangely inviting to the Viking invaders swarming their lands, often welcoming Eivor as something of a savior.

The rulers of England are portrayed as oppressively evil, and the change that the Vikings represent is oftentimes well regarded by the lay folk, which just would not have been the case at all, considering the world of strict rule and religion in which they lived their everyday lives.

While none of these little foibles take away from the overall Valhalla experience, which we loved here at Twinfinite, they are hard to overlook when you are cursed with history-brain.

While historical accuracy is an admirable aspiration, this is a video game, first and foremost. It needs to be fun, after all, and everything else should be a secondary consideration.