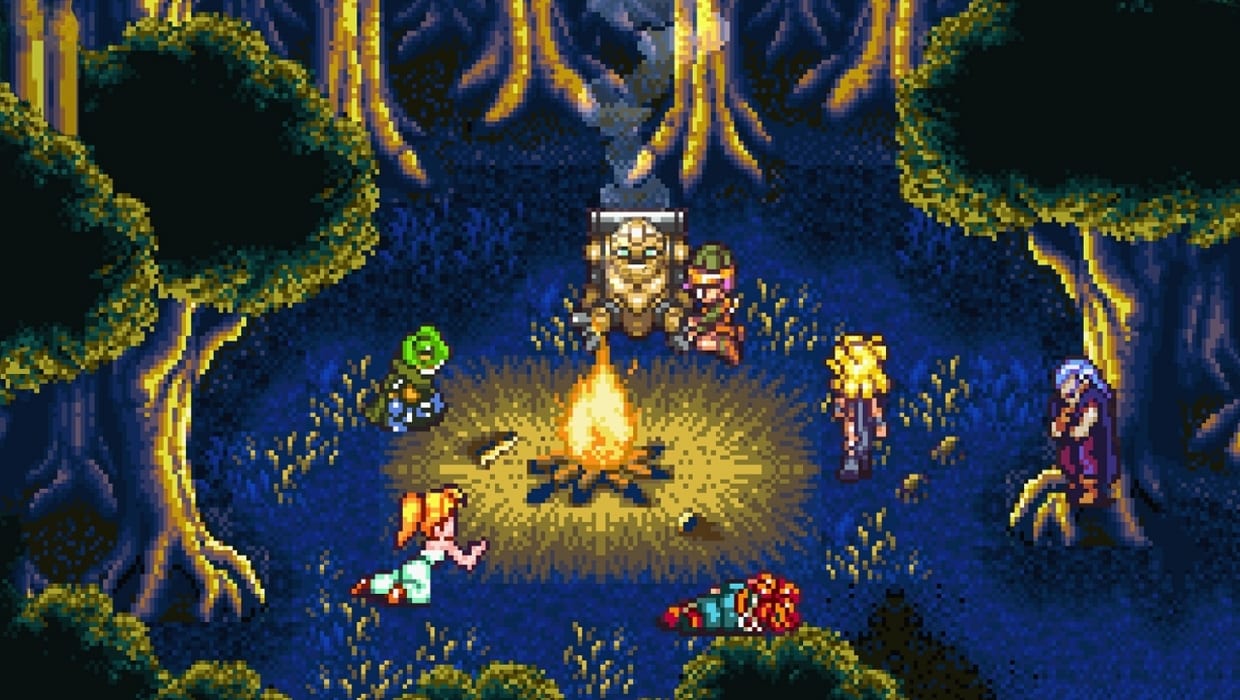 Chrono Trigger turns 25 years old in North America this week. Developed by Square, Chrono Trigger was a huge success upon its release and is even frequently referred to as one of the greatest video games of all-time.

Though it was considered revolutionary at the time, does it still hold up to today’s standards?

I played Chrono Trigger for the very first time this year in 2020 with little knowledge of the game prior to starting it. By the time I reached the credits screen, I got why it’s been praised for a quarter of a century.

In the game, the main character Crono teams up with an eclectic cast of heroes with the central goal of taking down Lavos, a giant creature that is determined to destroy the world. The group must travel through time to collect information and items to aid them on their quest.

The story is straightforward, but the way it unfolds throughout the journey makes you feel completely immersed and truly part of the quest. Crono is a silent protagonist, not unlike many other gaming heroes, which allows you to imprint yourself onto him and make it your story.

The world in Chrono Trigger feels much larger than it truly is due to the time travel mechanics. There are seven different eras that Crono and his friends travel to during their quest, ranging from 65,000,000 B.C. in prehistoric times to 2300 A.D. in the future.

Each of these time periods are drastically distinct from each other. As you travel between them, you learn how the world has changed over the course of human history, especially due to the effects of Lavos. Some of the time periods live in prosperity with advanced technology. Others live in poverty and desperation.

It feels as though the game pushed the SNES limitations to bring life (and sometimes desolation) to all of these areas. Events in the past impact the future, which successfully connects these eras instead of making them feel separate and isolated. This was a difficult feeling to capture in the SNES days.

While world-building is certainly one of Chrono Trigger’s strengths, it’s not what most sets it apart from other games released during the mid-90s.

Many of the JPRGs that were brought to the West around the same time as Chrono Trigger suffered from uninteresting or rote battle mechanics.

The elements in Chrono Trigger’s battle system are like those of traditional RPGs, but a unique aspect of it is the ability to combine Tech, or magic, attacks. Instead of having a character attack individually, they can use Dual Techs or Triple Techs to create stronger attacks. Characters have multiple Tech attacks, so there are dozens of different combinations.

While most RPGs at the time featured random encounter battles, Chrono Trigger’s enemies appear directly on the map, allowing players to mostly avoid any unwanted fights. This is a welcome feature compared to other SNES RPGs in which battles often feel like time-wasters when trying to quickly navigate through an area.

Chrono Trigger is somewhat shorter of a game compared to other JRPGs, but that was likely by design; the game features a whopping thirteen different endings, so the intention is to beat the game more than once.

However, not all of the endings can be reached during the first playthrough. There are a few endings that depend on how and when you decide to fight Lavos, but the majority of the endings can only be obtained after beginning again in New Game Plus mode.

Chrono Trigger wasn’t the very first game to have a New Game Plus mode, but its ideas for it were unique. You could start the game over and you would retain your party members, most equipment, and levels, meaning you would be stronger and could challenge Lavos earlier if you wished. This allowed for a new experience during the next playthrough.

Many SNES games released around the same time as Chrono Trigger had interesting characters with a lot of potential but did not explore them fully or give them enough depth. Chrono Trigger does not have this problem. Every party member has in-depth, optional side quests that develop their character and story.

If these quests are completed, you learn valuable backstory about each character that helps to tie them to the main plot while simultaneously making them stronger for the final battle. They are not side quests that feel like filler tasks to make the game artificially longer.

After all, who could forget helping Frog avenge his lost brother, or acting as Lucca to change a critical moment from her childhood that had haunted her ever since? These stories tug at our heart strings and connect us even more to the characters we got to know throughout the main story.

There are even elements of “choices matter” present in Chrono Trigger, which a lot of games back then did not (or could not) implement. Making certain decisions in the beginning of the game, for example, determines the outcome of Crono’s trial. Additionally, choosing whether or not to revive a certain character changes the ending scenes.

The game doesn’t suffer from many of the common problems that many other SNES JRPGs face, such as overly limited inventory space, frustrating difficulty spikes, or lack of story and character depth.

Even aspects such as graphics and music have aged incredibly well. Many SNES games still look beautiful today, but Chrono Trigger really did push the boundaries in terms of aesthetics in many of the game’s scenes.

All of these features sound standard for a game today, but when Chrono Trigger released in 1995, it was cutting-edge.

As I experienced it for the first time on the SNES in 2020, it never felt poorly-aged and instead was a game that easily could have released in recent years. Even the Nintendo DS remake in 2008 saw minimal changes, instead simply fine-tuning a few parts to make it work better on a handheld device.

The best way to play Chrono Trigger is still the original SNES version, but if that’s not an option for you, the game is available on the DS, Steam, and even mobile.

It’s easy to take for granted how incredible Chrono Trigger truly was (and still is). As we celebrate the game’s 25th anniversary, let’s appreciate how innovative, beautiful, and timeless it is.