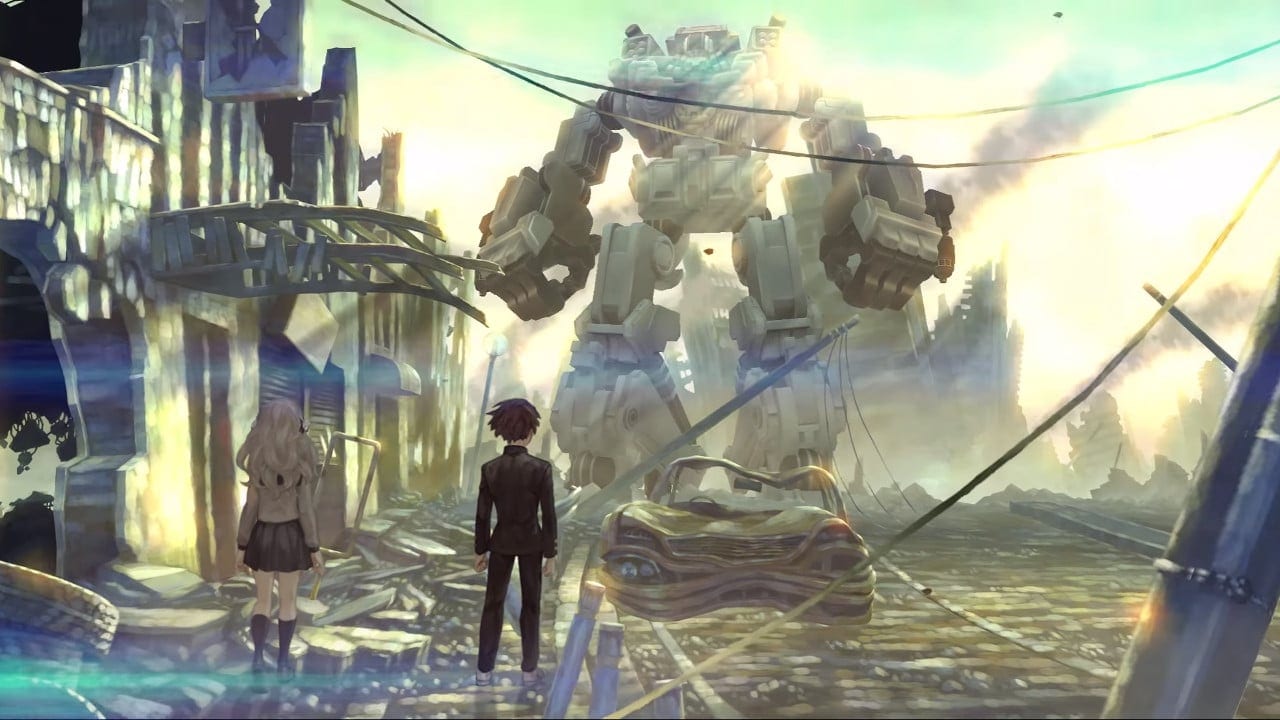 13 Sentinels: Aegis Rim has been in development for years. Initially announced for the PS3 and PS Vita before going dark for a long period of time, it’s finally almost time for the game to resurface on the PS4. I got to check out a preview build of the game last week, and while I’m still not quite sold on the premise just yet, it’s safe to say that this is likely Vanillaware’s boldest project yet.

Known for their side-scrolling action games like Muramasa, Odin Sphere, and Dragon’s Crown, 13 Sentinels: Aegis Rim is nothing like those aforementioned titles whatsoever. The usual Vanillaware flair is still present; the art style and visuals are breathtaking. The 2D anime character models are beautifully animated and the game just looks like a gorgeous diorama all throughout.

Set primarily in the 80s, the preview build allowed me to experience the prologue chapters of a handful of its characters. The story is told in a somewhat disjointed manner as you jump from one character to another, and you’re expected to piece little tidbits together as you view the story from different perspectives and angles.

I haven’t quite made sense of the entire thing just yet but I’ll do my best to summarize.

The world is in danger of coming under an imminent alien attack in the far future, and the 13 main characters have been entrusted with piloting large mecha robots known as sentinels to fend off the aliens. From what I played of the preview build, our heroes are mostly high school students who live in the 80s, but are quickly drawn to the future via time travel after they have strange dreams about the impending apocalypse and realize that it’s their destiny to pilot these mechs and fight off the enemy.

The story is clearly separated into two distinct parts. There are lengthy story sections where you’ll simply walk your character around, chatting with other NPCs to learn more about the world and story, and these can go on for quite a while. As you speak with more characters, you may learn keywords that your character can then ruminate on, and that might open up more dialogue and conversations with other NPCs.

While the prologue certainly felt like a slow burn with how lengthy these sections were and how disorienting the story could be, I did appreciate the game taking its time to establish all of its characters and weird jargon. The story’s never really been the primary focus in past Vanillaware games, but it’s clear that things are different here; the developers really want you to pay attention to what’s going on.

The characters themselves are charming and quirky for the most part. There’s a WALL-E-looking robot that takes you into the future, you have the tough guy who goes nuts for yakisoba pan, and a cute little cat with a contract. It’s endearing, and even though the story was hard to follow at times, the characters certainly kept me engaged.

In between the story sections, you’ll dive into RTS-like, turn-based strategy battles. In the prologue, I found the battles to fall a little bit on the easier side, though I’m sure the difficulty will increase considerably as I get deeper into the game. It’s the usual stuff you’d expect from your typical strategy game: spend resources to use special attacks, and take turns with your enemy to move around the map to get into a better position.

The prologue dropped me into missions with various objectives, such as having to protect a terminal from incoming kaiju attacks, or just wiping all enemies off the map in order to win. You’ll expend a resource called EP to pull off special moves unique to each character, and as the battle goes on, you’ll eventually be able to use powerful techniques (limited to one use per battle) to turn the tides in your favor.

As a huge fan of Vanillaware’s past action games, I’d be lying if I said I didn’t miss the fast-paced, flashy action of Dragon’s Crown along with all of its depth and RPG elements, but there’s definitely a lot of potential in 13 Sentinels’ strategy gameplay as well. I’m excited to see how it develops once the full game is available.

At the end of the day, I came away from 13 Sentinels: Aegis Rim feeling thoroughly confused but also intrigued by the direction that the story seems to be headed towards. Vanillaware games have always been regarded as beautiful works of art, thanks in no small part to its striking visuals and animations, and the same can be said of 13 Sentinels. The story may not have won me over just yet, but it has that Vanillaware flair that makes it feel like another hidden gem I’d be remiss to pass up on.