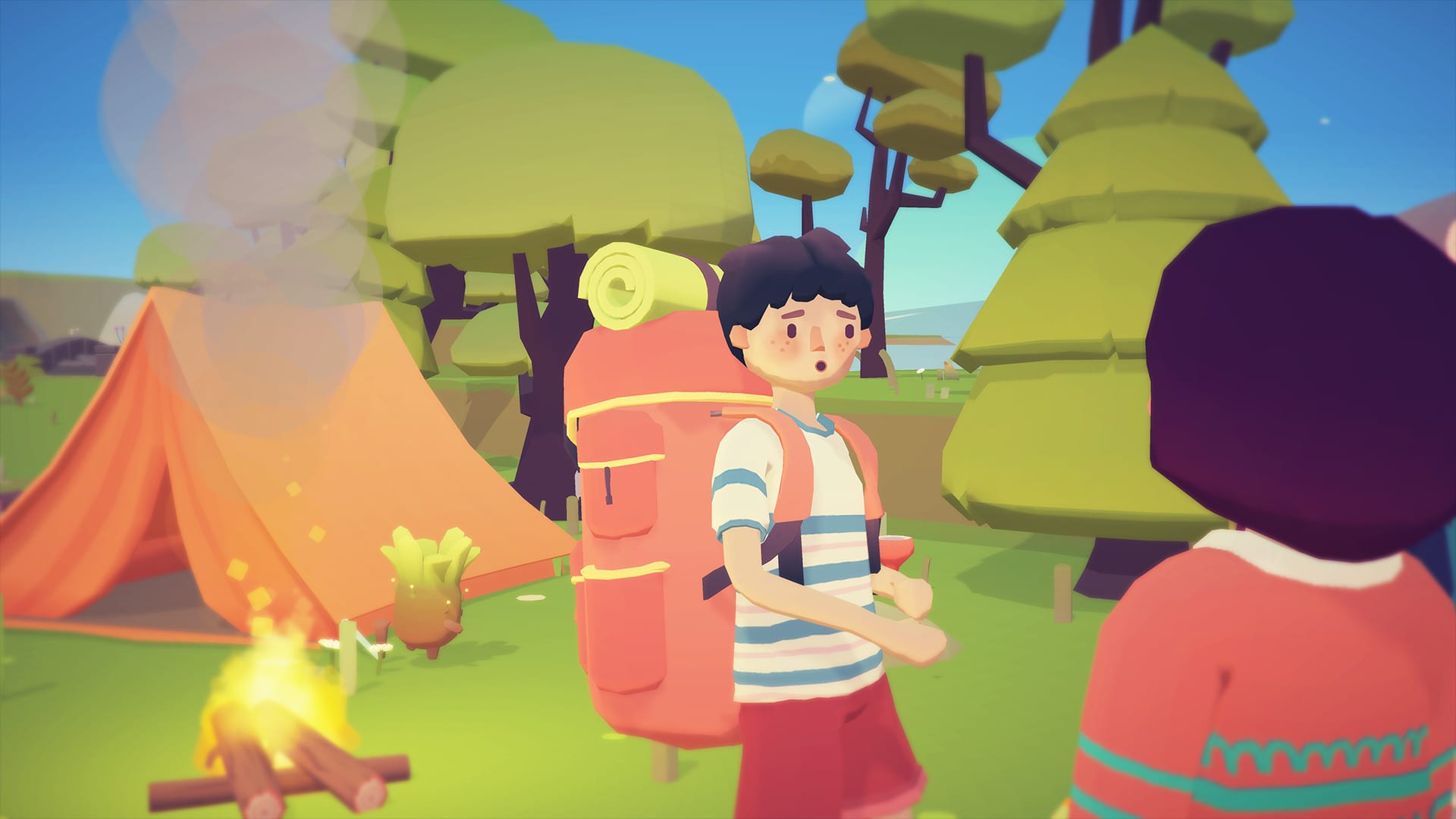 Take two cups of Stardew Valley and stir in one cup of Pokemon, give the mixture a sprinkling of Animal Crossing, and top it off with a hefty dollop of cuteness, and there you have Ooblets — the latest indie to capture our hearts with compelling gameplay and a heartwarming feel.

Things start off in Ooblets just like any other life sim. You arrive on the mainland Oob, in Badgetown and are swiftly greeted by Mayor Tinstle — a small, pink-haired girl who likes to dance around a lot. Well… all of the Badgetown residents love to do a little two or three-step shuffle to the Animal Crossing-inspired soundtrack that boops and bops away as you get to work.

Mayor Tinstle soon introduces you to the different Ooblet Clubs you can join and after making that decision you’re given your first Ooblet and set up on the abandoned farm just on the west side of town. From there on, you’re a resident and you’ll need to help grow crops, train up Ooblets, and do whatever else you can to help return the town to its former glory.

For the most part, Ooblets feels like a very charming and cuddly version of Stardew Valley. You’ll buy seeds for different crops, grow them on your farm — taking care of watering, tilling the soil, fending off weeds and the like — and then sell them or further refine them into other products to bolster your profits.

Those profits can then be spent buying more seeds, helping to complete different town projects, or buying furniture for your home from the local store.

Over time you can expand your farm, adding in more machinery or setting up Oobcoops to house your growing army of adorable creatures and enabling them to help you out taking care of the crops on your farm.

You can’t just toil away and do everything you want in a day, though. Your limited energy supply each day forces you to prioritize what you need to get done, and what can wait. It’s possible to replenish your energy gauge from sleeping or eating snacks, but doing so would eat into your profits, pardon the pun.

All of this hard work on your farm is then used to help the people of Badgetown. You might have to help Mayor Tinstle with a gift basket to try and swoon ‘the board’ and see them look favorably on the town again, or you might have to just help bring a random character some Muz (the game’s version of corn)… because Muz!

Ooblets expertly weaves its various mechanics and systems into one complete experience. The sense of satisfaction you get from finally helping to repair the Dance Barn or the hot air balloon with your own produce seldom gets tiring, and just pushes you to keep on grinding.

Just as you’d expect, this gameplay loop is just as compelling as it was in Stardew Valley or Harvest Moon or whatever other farming sim tickles your fancy. But Ooblets isn’t content with just one moreish game mechanic. It has overloaded its sickly sweet foundation, enabling players to battle with their Ooblets, too.

This is where the game can feel distinctly ‘Pokemon.’ Outside of the farming life, you’ll be able to challenge wild Ooblets to dance battles. Though, doing so requires you to have a certain ingredient or cooked food product to meet the wild Ooblet’s requirements.

You’re then thrown into what can only be described as a blend of Pokemon and Hearthstone battling. Your creatures won’t take damage, and you won’t choose one of just four moves for each of your Ooblets. Instead, moves are drawn from a deck of cards, and you’ll have five ‘Beats’ at the beginning of a round.

Every card uses some of your Beats, the amount of which depending largely on how powerful or effective the move is. The aim of the game here is to reach a set point goal before your opponent, and you’ll have cards that can give your team hype (giving you more points per card), steal points from the opposition, and even add pointless cards into your opponent’s deck. Oh, and your character does a charming little two-step in time to the battle music just adding to the cutesy feel of the whole thing.

In my 8-10 hours of playing Ooblets in early access so far, this dance battle system has held up fairly well, though I’ve not lost a single one just yet. I’ve even taken on some tough opponents in the form of ‘Gleamy’ Ooblets, the rarest variant of any species, and still managed to win by the very tight margin of a single point. Even so, it felt the game scripted the win.

At 39 points each out of the 40 target goal, my opponent wasted an entire turn to hand me the win. Not that I’m complaining, I needed that Gleamy Ooblet (as they can produce Oobsidian, a very rare material), but it did leave a sour taste in my mouth uncomplimentary of the victory.

The combat system definitely works, and it’s a nice play on the typical turn-based battle system we’ve seen time and time again, but a slight tweak on the difficulty side of things certainly wouldn’t go amiss.

Finally, we come to the Animal Crossing cherry on top of this enormous, pastel colored cake. Aside from the distinctly Animal Crossing-inspired music throughout the game, there’s a whole social system at play, too.

The people of Badgetown aren’t just there to make it look busy. Speaking to them will help you boost your friendship with them, which unlocks ‘stickers’ each time you reach a new level and a number of gifts in return. In other words, it really pays to be sociable in Ooblets.

From time to time, they’ll ask you to help them out by bringing certain items or materials, and other days you can give them a desired item without them asking for it to give your friendship a huge boost. There isn’t a marriage or romance system just yet, but that certainly feels like the next logical step for the development team to add in on the ‘social’ side of Ooblets.

Badgetown is bustling with things to do. You’ve got the coffee shop where you can get yourself some much-needed energy-restoring goodness, the hairdresser to change your hairstyle, the furniture store to buy new goods and decorations for your home, the clothes store to change up your look, the town hall to proudly display your Ooblet figures once they’ve been scanned, sea dangling — Ooblet’s name for fishing — clearing up mystery cans dumped around the town, finding recipe pages to unlock new cooking options, and foraging around for other items and plants you may need.

You get the idea, there’s an absolute ton to do in Badgetown, and that’s just the beginning.

Currently, players can help repair the hot air balloon in Badgetown and eventually make their way to another area called Mamoonia where different crops, items and Ooblets can be found. From the balloon’s transportation menu, it also looks like two additional areas will also be added further down the line, which will surely help Ooblets reach its potential.

There’s a lot to get your head around in Ooblets, even during this early access stage, but it’s got a ton of potential if it’s able to deliver. The amount of different Ooblets for you to grow and add to your growing army of cuddly creatures could certainly do with bolstering, as while I love Badgetown, the lack of new and exciting creatures to come across and capture is beginning to be felt.

I’ll be keeping my eye on Ooblets as the two-person development team continues to toil away, experimenting with dashes of delight, sprinkles of sweetness and cuteness by the cup. Ooblets has shaped up just the way I’d hoped it would when I first played it at E3 in 2017, but there’s still some way to go. Given the state of the game currently, though, it’s in more than competent hands.