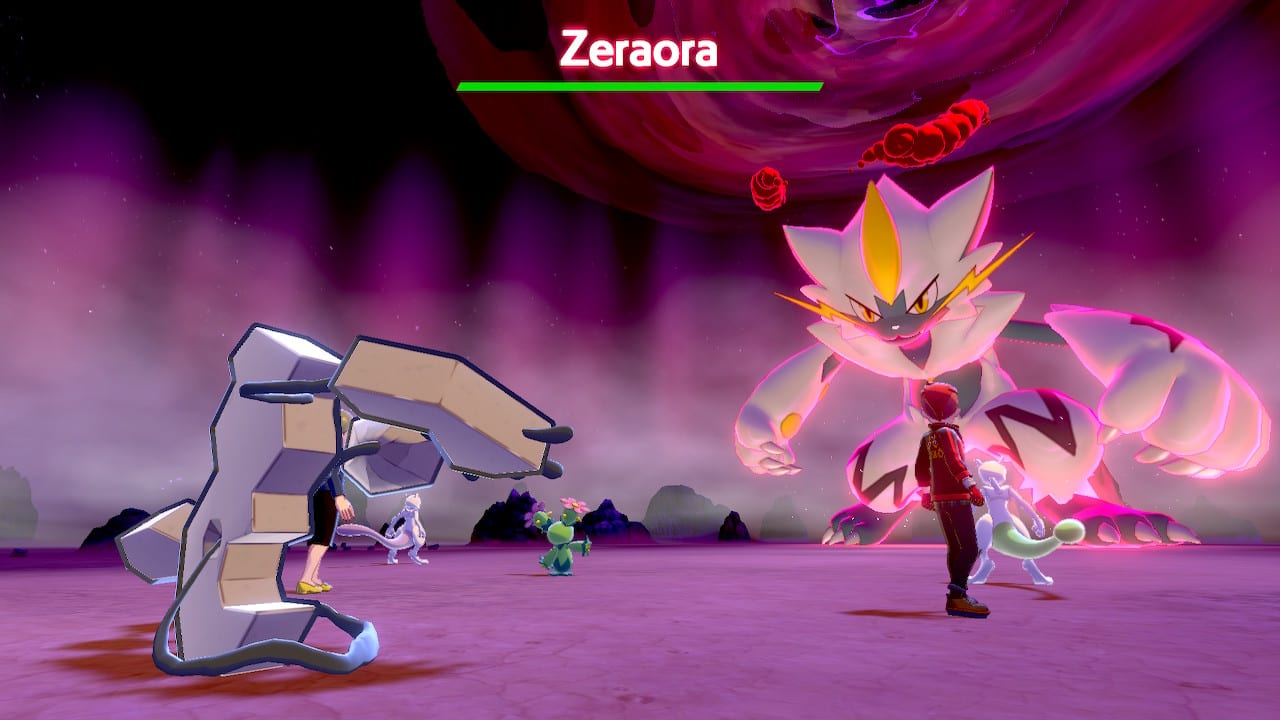 The Electric-type Mythical Pokemon, Zeraora, is now appearing all over the Wild Area and Isle of Armor in Sword & Shield. Just like Mewtwo, you can’t catch it. However, with enough victories by everyone around the world, you may just get a shiny Zeraora. Here’s everything you need to know about how to beat the Zeraora Max Raid event.

How to Beat Zeraora Max Raid in Pokemon Sword & Shield

If you throw in just any old Pokemon in this raid, then you’re not going to have much success. First, you need to know what Zeraora is throwing at you. This Mythical Pokemon has Fighting-, Dragon-, Electric-, and Fire-type moves.

But before we get into suggesting Pokemon to use in the Zeraora Max Raid, just know that you’ll need to get your raiding mon to level 100. You don’t want to be the one trainer who gets knocked out by a not very effective Blaze Kick.

And if you want to get the best rewards, then you’ll have to beat a level 100 shiny Zeraora. But the shiny version only has a five percent spawn rate. Every other Zeraora raid you encounter will be level 60 or lower. Still, having level 100 mons will lessen your need for other human players to join you.

Zeraora has a wide range of type coverage, so that makes it pretty difficult to choose a solid team. Many people just go straight for Zacian, Zamazenta, or Eternatus in these more difficult raids. But you may want to reconsider that gut reaction.

Zeraora has a wide range of moves at its disposal, but a solid Ground-type Pokemon at level 100 should be good enough to get the job done. Pokemon like Sandaconda, Rhyperior, or Dugtrio are all great options. They all resist Electric and Fire attacks while dealing super effective damage.

Be mindful of what types your Pokemon are. Flygon may seem like a good option since it’s a good Ground-type. But one Outrage or Max Wyrmwind will easily take out a Flygon.

The ideal typing would be Ground/Fairy, so it can also resist Outrage or Max Wyrmwind. Sadly, that doesn’t exist. However, Runerigus and and Golurk are two good Ground-types that have some extra invulnerability thanks to their Ghost typing.

It’s also important to note that Lightning Rod will help pull Electric attacks away from your teammates and focus them on Rhyperior. But you’ll need to be careful since Zeraora’s Max Knuckle can easily take out a huge chunk of HP.

Then once you have the right Pokemon, you’ll also need the right moves. For Ground-type attacks you’ll only need Earth Power (for special attackers), Drill Run, or High Horsepower (both for physical attackers). Earthquake is a fantastic move, but it’ll KO your teammates well before Zeraora.

Keep on spamming those Ground-type moves and you should be home free. Just be careful to not let your Pokemon take too much damage. Don’t be afraid to heal up if your Pokemon’s HP is getting too low.

Last but not least, if one million trainers defeat Zeraora by June 28 at 4:59 PM PT, then everyone will get a free shiny Zeraora in Pokemon Home. This gift will have to be transferred from Home to Sword & Shield to be used in the game. No Pokemon Home subscription is required.

Here’s a quick summary on how to beat the Zeraora Max Raid in Pokemon Sword & Shield: