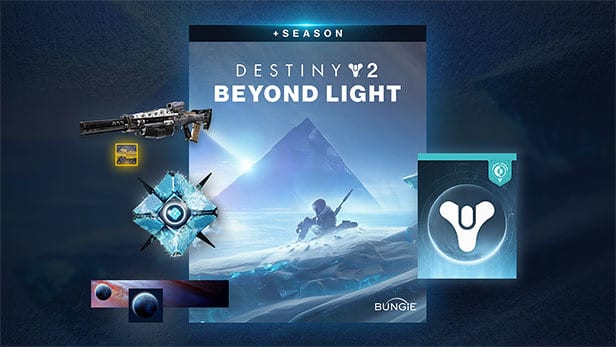 The next chapter in Destiny 2’s saga has been revealed earlier this week and it promises to deliver both an epic tale and some interesting new gameplay features. Naturally, fans are chomping at the bit to secure a copy and make sure they’re ready for action on launch date, so here’s how to preorder Destiny 2 Beyond Light on PS4, Xbox One, and PC.

Beyond Light is scheduled to launch this fall, Sept. 22, on PS4, Xbox One, and PC.

As confirmed by Bungie earlier this week, it will also be coming to next-generation consoles PS5 and Xbox Series X when they release later in the year. For those who purchase the game on current generation, they’ll be able to upgrade to next-gen versions of the expansion free of charge.

Given the significance of Beyond Light in terms of its content and story, it’s getting several different editions. Here’s a breakdown of what’s on offer in each:

Includes just the game itself.

You can also order the Standard Version of the game and the Season Pass at the same time for $10 more.

Included with Beyond Light + Season Access to Season 12 and the No Time to Explain Exotic Pulse Rifle and catalyst.

The Stranger Edition comes with everything in the Digital Deluxe Edition but also included a 10″ statue.

The Collector’s Edition comes with everything in the Digital Deluxe version, plus:

How to Preorder Destiny 2 Beyond Light on PS4, Xbox One & PC

Preorders for Destiny 2: Beyond Light are already available for Xbox One and PC, but PlayStation players will have to wait a little longer to pre-order from the PS Store. That being said, you can still pre-order a PS4 version of the Collector’s Edition from Bungie.

In any case, all you need to do is head to the right online store to make your purchase.

Here are some useful links:

The Stranger Edition is not yet available for preorder.

That should be everything you need to know about how to preoder Destiny 2 Beyond Light on PS4, Xbox One, and PC. For more useful tips on the upcoming expansion, search Twinfinite.