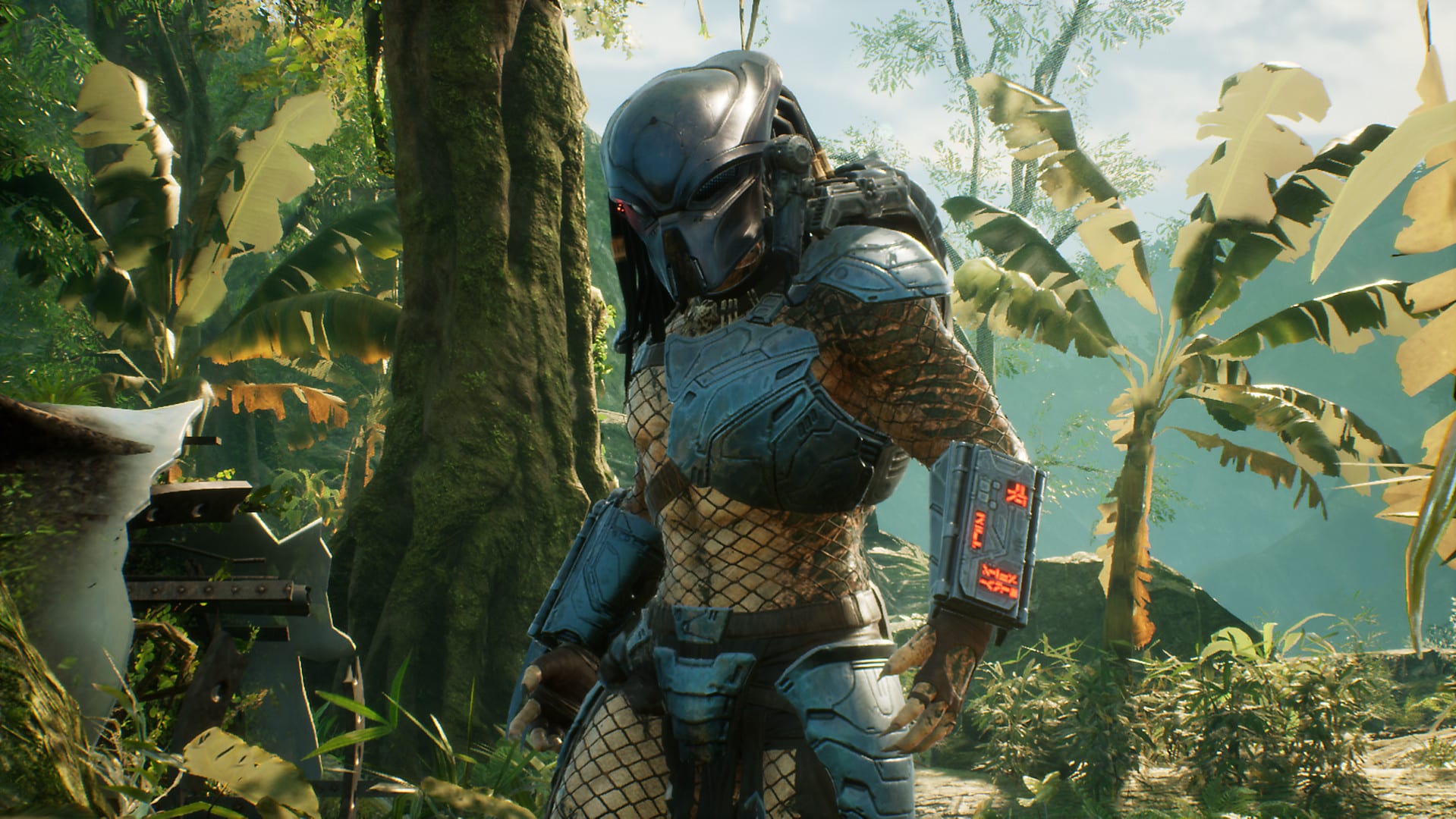 Predator is the perfect property for an asymmetrical multiplayer game. Dead By Daylight has been a hit for a few years and Friday the 13th was short term fun, but jumping into the shoes (does he wear shoes?) of the iconic hunter in Predator Hunting Grounds had the potential to be the best yet.

A match is four vs. one, with a Fireteam picking a drop point before venturing into the jungle to complete a multi stage mission, all while anticipating an attack from the Predator, who’s being controlled by the lone player.

As the Fireteam, it’s a pretty generic first-person shooter. The movement is a bit clunky, there’s strangely almost no recoil while firing, and aiming is very floaty. It doesn’t feel horrible though, and popping bad guys in the head is still quite satisfying, even though the enemy AI is hilariously dumb, seemingly not having eyes or ears.

The progression system is well designed too, giving you new attacthments and weapons to use as you level up, even giving you the chance to make another custom loadout every ten levels of so.

Saying that, the Fireteam missions feel like a mode from a time when multiplayer was tacked on to single-player games back in the PlayStation 3 and Xbox 360 days. It doesn’t have the depth or quality of other multiplayer shooters. It’s serviceable, but nothing more.

However, how fun playing as the Fireteam is is down to a few other factors, some of which are out of the players’ control.

First of all, and probably most important, is that Predator Hunting Grounds is at its best when you’re playing with a full squad of friends. Being able to listen out for the Predator’s clicking and make sure you’re staying together makes the missions a lot more tense.

Also, if the hunter does strike and you manage to injure him, rousing the troops, flipping the fear on its head, and going on the hunt yourself to finish him off is a thrill.

Without a coordinated squad, the Fireteam missions are a repetitive slog. You’ll be heading to capture points, interacting with computers, and waiting for timers while waves of enemies come towards you. There’s nothing to get excited about when you can’t make your own fun with friends.

While there’s technically three different maps, you’ll be hard pressed to distinguish them. They’re all variations of vine strewn forests, littered with outposts and nothing more than a trainyard or a warehouse to make them stand out.

Predator Hunting Grounds is also quite ugly. There’s a strange shimmer on anything that is not up close to you, and anything that is nearby will have extremely poor textures. The maps just aren’t nice to look at and provide nearly no variety.

If you’re a new player, the repetitive missions, bland maps, and eye-sore surroundings aren’t too much of a big deal, but keep playing and you’ll quickly see that Predator Hunting Grounds really suffers from a lack of content.

The other factor that decides how much fun playing as the Fireteam is is whether or not you have a competent Predator in your match. The strengths of the Fireteam and Predator are well balanced, so the hunter can’t just run into the action and swipe away with his claws, expecting no consequences.

Players will need to use every one of its abilities to hide and stalk, striking when a Fireteam members strays from the pack or gets distracted by another fight.

If your Predator opponent is overly cautious, barely even attacking for the course of the whole mission, or if they’re overly aggressive, dying within a minute or two, the entire match just ends up feeling like a waste of time.

You really want the Predator to be a threat, hiding in plain sight and ramping up the fear until the Fireteam makes a mistake. Having a decent opponent make the missions tense in a way that they can’t be otherwise.

All of that means playing as a Fireteam is only occasionally fun. There are too many issues that can go against you for it to be worth sticking with it.

However, playing as the Predator is more consistent, even though it has its own slate of problems.

Hunting the Fireteam is a much more unique experience. It’s pretty faithful to the original movies, with you having a laser cannon to use in addition to the classic claws, and using Predator vision and cloaking are vital to catching the team of four by surprise.

Creeping through the tree tops, looking for the Fireteam and opportunities to pounce is great fun. You can see when the people you’re hunting get scared and start to panic, giving you a chance to put the pressure on. You feel powerful but not too much so that you don’t need to think about your tactical approach and how you’d escape if things go wrong.

The first stumbling block when it comes to playing as the Predator though is that you’ll have to spend a lot of time waiting. Since you have to search for a lobby every time you play a mission, it can be anywhere from five to 15 minutes to find a game as the hunter.

When it’s on the lower end, it’s not too bad, but when matches can often last less time than it takes to matchmake, it feels like you’re wasting a lot of time. As much as I always wanted to play as the Predator, I’d often just jump into a match as a Fireteam member because I couldn’t be bothered to wait.

There’s a steeper learning curve to playing as the Predator too. With more weapons and skills to master, tactics to figure out, and no one to back you up if you make a mistake, you need more than a few games before you’re comfortable with how everything works, let alone how best to use them.

Of course, when it’s 4v1, it’s difficult to alleviate the issue of matchmaking wait times, but it’s something to note when playing as the Predator is the game’s primary selling point.

I also noticed more bugs when playing as the Predator compared to when playing as the Fireteam. The problems are nowhere near as bad as they were in Illfonic’s other game, Friday the 13th, but there’s the usual slate of frame-rate hitches and examples of enemies glitching through walls.

Once though, I got stuck between a rock and a tree as the Predator and couldn’t get free, no matter how much jumping I did. My only option was to quit, ruining the game for not only me but the Fireteam I was supposed to hunting. Bugs like that were infrequent, but they serve as reminders of how un-polished Hunting Grounds is.

Playing as the Predator is a wonderful idea, it just deserves a better game around it. Bugs, mediocre first-person gameplay, repetitive missions, an ugly setting, and a reliance on playing with friends mean Predator Hunting Grounds is boring a lot more often than it is enjoyable.