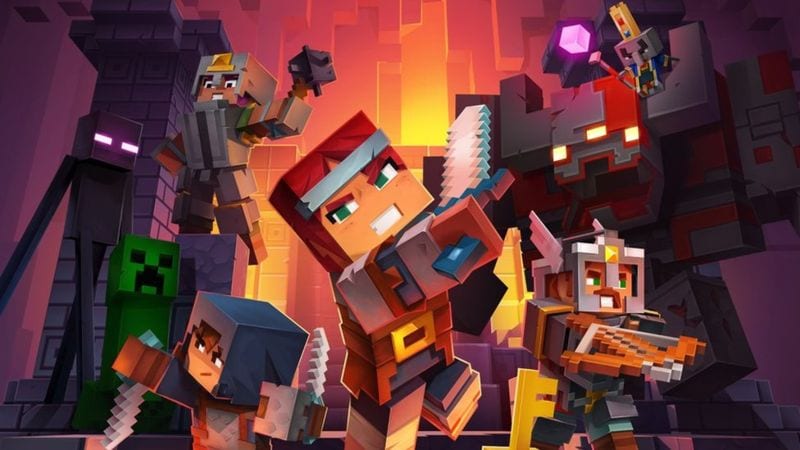 Over the past couple of days, I’ve been working through Microsoft and Mojang Studios‘ dungeon crawler Minecraft Dungeons for review. Due to the short amount of time I’ve had with the game before the review embargo lifted, I’ve yet to finish the game and pen my final thoughts. Those will be arriving in the coming days, but at a point yesterday, this reality felt far from a possibility.

My plan was a simple one, run through the entirety of Minecraft Dungeons on its ‘Default’ difficulty, before trying out its Adventure mode which promises tougher enemies, better loot, and unlocks more gear types in general you may not have seen before.

That’s more or less the premise of Minecraft Dungeons; you dive into a level, clear it of its mobs of enemies, and then move onto the next one. You upgrade your weapons and armor with enchantments that grant passive abilities to help you through the next challenge.

While Minecraft Dungeons certainly feels like it should be played in co-op with some friends, you’re not forced to. You can take these dungeon roads on your own and that’s the option I chose to take for my first playthrough.

Things started off well. My Hero was constantly above the recommended level for each of the game’s main and side missions, and it seldom put my skills to the test. The gameplay’s very basic you see, with A being pressed to melee, RT to use a ranged attack, RB to roll, LB to heal, and X, Y and B assigned to various different active abilities that cooldown over time.

Within five hours I’d crushed through Minecraft Dungeons’ first eight main levels and the side levels that I’d unlocked. Now all that remained was the final level.

It’s here where one of my key gripes with Minecraft Dungeons lies. The final level (which we’re not going to name for spoiler reasons) is a nightmare for solo players.

With a recommended level of 21, my current Hero at level 24 should cruise through this final challenge just as he had through every other level that he’d faced prior.

I was wrong. The final mission challenges players to work their way through three of the toughest enemy types, alongside mobs of more than 10 enemies at a time frequently throughout. That’s all before you reach the final boss battle, whose second phase is, quite frankly, cheap.

Don’t get me wrong, it’s possible to beat Minecraft Dungeons on solo on your ‘Default’ difficulty, and had it not been for the game randomly crashing on me last night during the encounter, I may have finally done it. But it doesn’t feel quite as satisfying and enjoyable as the rest of the game had been up until that point.

It feels like a slog, and the kind of difficulty spike that, with no option to dramatically improve your character’s loadout other than giving up Emeralds for an RNG chance at a new piece of gear is likely to be off-putting for many players. Particularly those younger players enticed to try it out solely because it’s a Minecraft game.

Now that I’ve written this up, I’m back to slam my head against the concrete wall that is Minecraft Dungeons’ final level on solo. Expect my full review… soon?