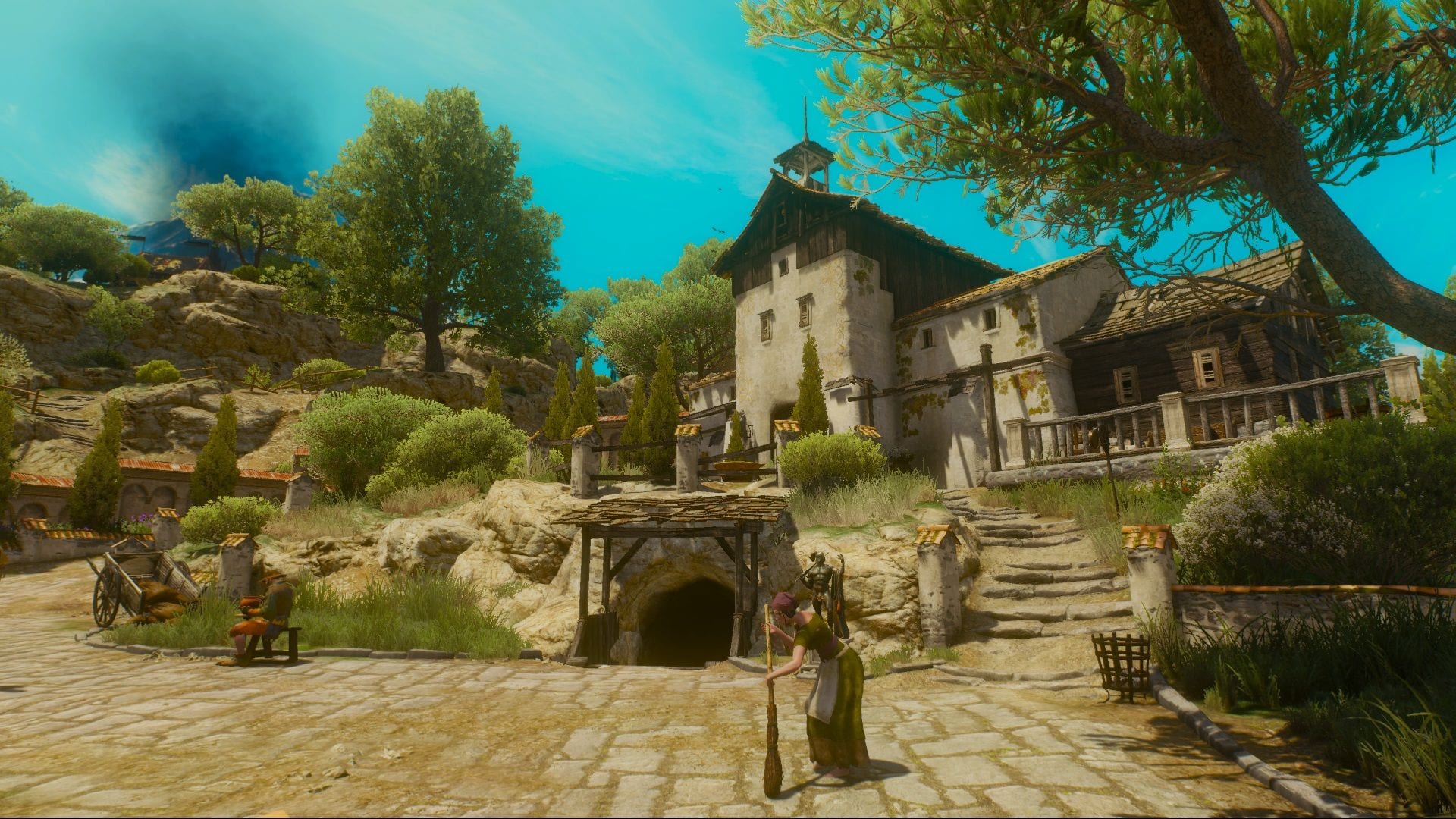 A spell of balmy spring weather has southern England feeling like Toussaint right now. The sky is blue, the grass is lush, and there’s a warming glow to the sun that has me feeling ready for a siesta by four o’clock. Afternoon ice-coffee is the must-have beverage.

There are worse places to be in the midst of a pandemic lockdown, in all honesty, which means today’s stroll amongst the grounds of Corvo Bianco –forever my video game happy place– is less out of necessity and more just in celebration of The Witcher 3: Wild Hunt’s fifth birthday.

I’ll take any excuse to make a return, anyway.

Toussaint, in general, is for me one of the most beautiful sandboxes ever conceived in gaming. A polar opposite to Velen’s grim battlefields and the biting chill of Skellige’s frosty shores, it’s a setting that feels as though it was conceived by a studio keen to let its hair down, to create something totally over the top and indulgent in fantasy.

Toussaint’s lighting, for example, makes it feel as though the sun is perpetually just on the cusp of setting — warm, orange beams radiate over fields of sunflowers and vineyards.

There’s a lazy, relaxed ambiance to the entire region that beckons you to sit back and take in the climate. No wonder its population doesn’t seem to be in a hurry to get anywhere.

And neither was I from the very first time I experienced the Blood and Wine back in 2016. CD Projekt Red had been very clear that it was the final DLC in what had been a commendable effort from the team to support the game with all sorts of content post-launch.

So this was it. The last waltz in a game that had been such a very special experience. I was always going to savor every last minute.

Thankfully, Corvo Bianco made wallowing in Toussaint very easy indeed. The side quest No Place Like Home, which tasks players to restore the once-illustrious villa and grounds to its former glory, had me in hog heaven.

It was like living out an episode of Escape to the Chateau (video game edition), minus having to deal with unreliable French tradesmen and panicking over dwindling finances.

No, the workers of Toussaint were much obliging by comparison, and Geralt’s purse was plenty fat after 120 hours in the main game.

So much so that truth be told I could have probably restored the entire property in one go. But I didn’t. I preferred instead to piece it back together one considered step at a time, returning after every few quests to gaze over progress and smell the roses in the greenhouse.

And what better break from the stresses of tracking a murderous vampire interaction with the eccentric Barnabas-Basil Foulty? The zany majordomo, who’s named after the iconic Basil Fawlty of Fawlty Towers, shot to the top of my favorite NPCs list after first giving me a tour of the premises.

Described as a “gentleman’s gentleman,” I love how his relationship with Geralt slowly develops throughout the expansion and I find his passion for the estate rather contagious (clearly). Check out his character synopsis from the game’s journal:

“Geralt could not have hoped for better help. One could even say that, by entrusting Corvo Bianco to the hands of that marvelous majordomo, Anna Henrietta had given the witcher the most beautiful present he’d ever received, for a home without someone capable to care for it is no home at all.”

The whole place is just escapism personified; the moment I hear Toussaint’s enchanting soundtrack over the hum of cicadas beating their wings I’m miles away. I never want this final chapter in The Witcher saga to end.

But end it does, and with a fitting send-off to Corvo Bianco, too. There are two brilliant scenes that bid farewell to both of the estate and the entire Blood and Wine storyline that take place at Corvo Bianco — though one you may encounter earlier depending on how quickly you complete No Place Like Home.

The scene I’m referring to sees Barnabas and Geralt share a drop of wine to commemorate the restoration of the estate to a condition befitting of its illustrious history.

It’s very sweet, especially because you get the sense that Geralt is definitely ready to settle down and enjoy his retirement pondering nothing more but the season’s crop of grapes and the continued upkeep of his new home. Far more relaxing than battling Kikimora’s and fending off attacks from the Wild Hunt, certainly.

But as charming as Barnabas is, Geralt is in need of a more romantic partner to share the rest of his days with. That’s where Yennefer comes in — assuming you’ve made the correct decision to romance her during the game, of course! Otherwise, you can expect a cameo from a red-haired sorceress instead.

I love the notion of Geralt and Yennefer –two of my favorite video gaming characters– living out the rest of their lives in the majesty of Corvo Bianco and all its beauty — a retirement well-deserved after everything they’ve been through.

Funnily enough, that very vision was celebrated by CD Project Red itself two years ago as part of a previous anniversary. It seems we’re all on the same page!