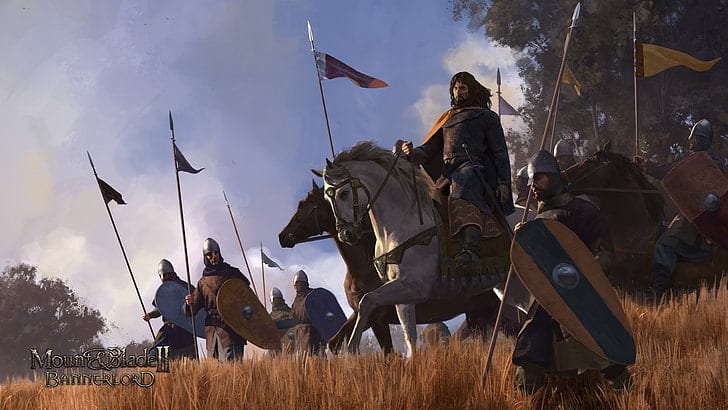 Welp! TaleWords’ long-awaited sandbox RPG Mount & Blade 2: Bannerlord has its claws in me; I’m so far down the rabbit hole I can barely find my way out to take a shower or make something to eat.

Even when I do, it’s still on my damn mind: Queuing for the grocer, I nearly declared war when the bloke in front of me paid £23.99 in pennies; on the way home I pondered the efficiency of setting up a caravan instead of lugging “goods” by hand. And when the receipt in my pocket reminded me I’d just spent three times the normal price for a can of tuna, I cursed those pesky panic-buyers for laying siege to the town’s supermarket.

Still, small interruptions aside, I find myself actually glad that self-isolation means there’s barely anything to disturb my quest across Calradia. I don’t even have to pretend I’m disappointed to be letting friends down for missing social occasions! There’s not the slightest bit of guilt as I scurry to my PC at every waking moment… even if my obsession with it is very clearly driving me insane.

But this is the nature of deeply engrossing RPGs with daunting levels of complexity. There’s just so much to learn, and Bannerlord goes a step further with its third-person action-RPG/RTS combat, grand strategy elements, involved economy and trading system, companion mechanics, and a loose story that incorporates political intrigue.

If all that wasn’t enough to get your head around, the game really is in the early stages of Early Access — progression isn’t balanced, it’s missing features, there are incomplete questlines, and poor optimization means that it struggles to run on a pretty decent gaming rig (although a new update today has made improvements).

I’m probably not doing a very good job of selling this to you, but stick with me.

While Bannerlord is difficult to understand and sometimes arduous to play, the magnitude of its challenge is something I’ve found incredibly rewarding so far. I’m sure that for all its blemishes, the game has the potential to become one of the best RPGs of all time. Seriously.

The magic is in how your journey begins and the freedom you’re given right from the off. After a brief, optional combat tutorial and a short prologue, you’re given complete independence to explore an enormous sandbox.

With just a rag-tag bunch of mercenaries and not a bean to your name, it’s completely up to you how you establish your clan in a world scavenged by hordes of bandits and dominated by powerful empires. Calradia is a hostile, punishing place in which you and your bunch of nobodies aren’t paid any special attention.

Thankfully, there are many options before you. For one, the game’s skill-based combat system offers the opportunity to out-play stronger groups of enemies if you’re willing to learn. Or perhaps you’d prefer to sit back, send the troops in and win via master tactics rather than bloody fighting? In Mount & Blade 2, combat alone is a whole game in itself.

Although, you never have to master it if you don’t want to. Instead, you can auto-resolve conflicts, opting to win battles by the sheer weight of your clan’s numbers — numbers you’ve acquired after setting up, say, an enormous trade network.

In my own playthrough, after spending hours buying goods in one town and selling them for profit in another, I’ve opened trade workshops and commissioned caravans to earn a passive income that’s made me a medieval mogul.

Now, with my clan of 40 or so converted prisoners I’ve taken from battles across Calradia, I just tag onto other armies within the empire I’m allied with and watch as we maraud the sandbox defending and attacking castles. It’s super chilled.

In fact, that’s another aspect of the Mount & Blade 2 experience I’ve found refreshing: how utterly relaxing the game can be if you want it to be.

Once you learn that you don’t need to try and understand everything it has to offer at once, just zeroing in on one small aspect of its gameplay is surprisingly entertaining. Especially because it’s so tough, making any sort of headway is satisfying.

To tell you the truth, I’m 20 hours in and haven’t really engaged with castles sieges, nor have I got into using the smithy to smelt materials for crafting or profit. The nuances of the marriage system still elude me, too, and I haven’t yet tried the game’s arena-style tournaments. Owning my own Kingdom is a distant goal.

But importantly, despite a few bumps along the way during my Mount & Blade 2 journey, it’s still an incredibly exciting prospect. I spend far too many hours of my days plotting and planning a future takeover of Calradia, confident that all will soon bow before me (those bloody Vlandians won’t know what’s hit them).

Best of all, I find myself resenting being stuck indoors in self-isolation just a little bit less.