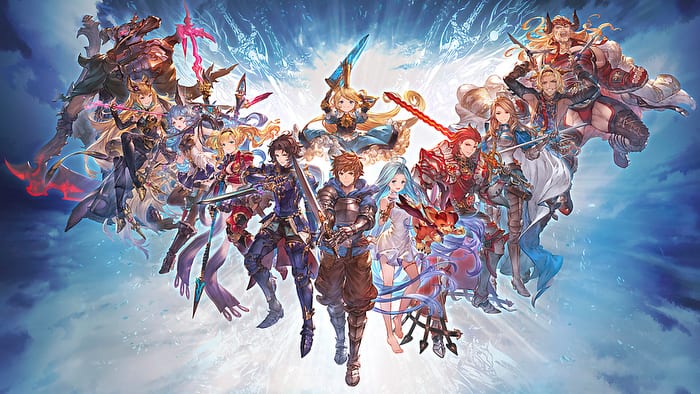 Granblue Fantasy Versus on PlayStation 4

It’s no secret that Arc System Works are masters at developing fighting games which move, play and feel like an experience all their own. Their latest title, Granblue Fantasy Versus, is no exception, and gives a strong showing for a potential new great fighting game franchise in the making.

Based off of the Granblue Fantasy mobile game franchise, Granblue Fantasy Versus sets itself up the same way many other ArcSys games do. A strange phenomena has occurred which is bringing characters from the franchise together and pitting them against each other.

However, Gran and Lyria find themselves immune to whatever force is influencing their former allies. As a result, it’s up to them to set out and knock some sense into their friends, enlist them to their cause and track down who or what is responsible for the disruption of their hard-fought peace.

It’s nothing groundbreaking in terms of story, but it’s held up by some top-notch voice acting and serves the purpose of getting the ball rolling for the game’s various gameplay modes wonderfully.

Which is no small feat; Granblue Fantasy Versus is filled to bursting with content for players both new and experienced in the fighting game genre to dig into.

On its surface, there’s the standard versus mode, and it functions about how fans of the genre would expect. Players can battle against one another online or offline as any one of the game’s characters, save for two which are only available as DLC.

Each character offers their own play styles, strengths and weaknesses, and abilities which set them apart, allowing for plenty of variety in match-ups.

Where the straight sword-wielding Gran offers balanced attacks and range alongside decent speed, the lithe Lowain can slice, dice and counter opponents with his dual-wielded knives. The glass cannon Metera can pelt enemies from a distance with her suite of ranged attacks, and the hulking Ladiva can toss opponents around like rag dolls with the bevy of grappling moves at her disposal.

It serves to give the game a level of depth on par with any of ArcSys’ other games, and thanks to a combo system that’s easy to learn but hard to master, it’s easy for most anyone to hop into and start to enjoy at a moment’s notice.

This is only bolstered by the technical polish of the game. Though some cutscenes can stutter here or there, Granblue Fantasy Versus plays as smooth as butter both online and offline, making for bouts where both players can execute combos with split-second precision as the beautifully rendered 2.5-D characters turn into art in motion.

Then, there’s the Arcade mode. Again, it’s about what fans of the fighting game genre would expect: Players choose a character and make their way through a series of standard fights. Should they make past a gauntlet of opponents, they’ll have the option to take on the game’s final boss character.

However, this formula is mixed up by the fact that players can choose from a small batch of opponents after each victory. Each opponent has a different level of difficulty, so if a player is in mood to amp up or tone down the mode’s difficulty on the fly, they can do so through these branching choices.

Finally, there’s the RPG Mode. Acting as the game’s story mode, it sees players engage in a search for the cause of the disturbance in the world. Quests are provided for them to complete, and while some are standard 1v1 fights, others see the player battle through waves of enemies and special bosses via side-scrolling beat-em-up gameplay.

They can likewise boost their characters’ stats by leveling them up, equipping them with new and stronger weapons, and equipping weapons with elemental properties tied to them which provide boosts against specific types of enemies.

RPG Mode also provides the Tower of Babel Mode. Acting as a survival mode of sorts, it allows players to battle through waves of enemies and bosses alike, with each new floor offering harder and harder enemies to overcome.

It’s a novel approach to a fighting game story mode, and it makes for a deeper and more enjoyable experience than the game otherwise might have had.

Which is good, because one of Granblue Fantasy Versus’ biggest flaws is how repetitive it can feel. For all of the different modes and gameplay mechanics the game can offer, there’s a limit to how much variety players can glean from what’s offered.

This issue likewise affects the game’s stages. While they’re pretty to look at, there’s not much to distinguish them from one another, and players wouldn’t be blamed for barely noticing when they’re fighting in one versus the other.

Cap this off with a pretty limited pool of enemy types players have to hack their way through in the side scrolling segments, and it’s no surprise that the game loses some of its luster after a few dozen hours.

Granblue Fantasy Versus is commendable title. It provides a solid start to what could be an exceptional series, and while it’s not without its flaws, there’s more than enough to satisfy fighting game fans of all stripes while they wait for what could be a new series primed to reach its full potential with a bit of polish.