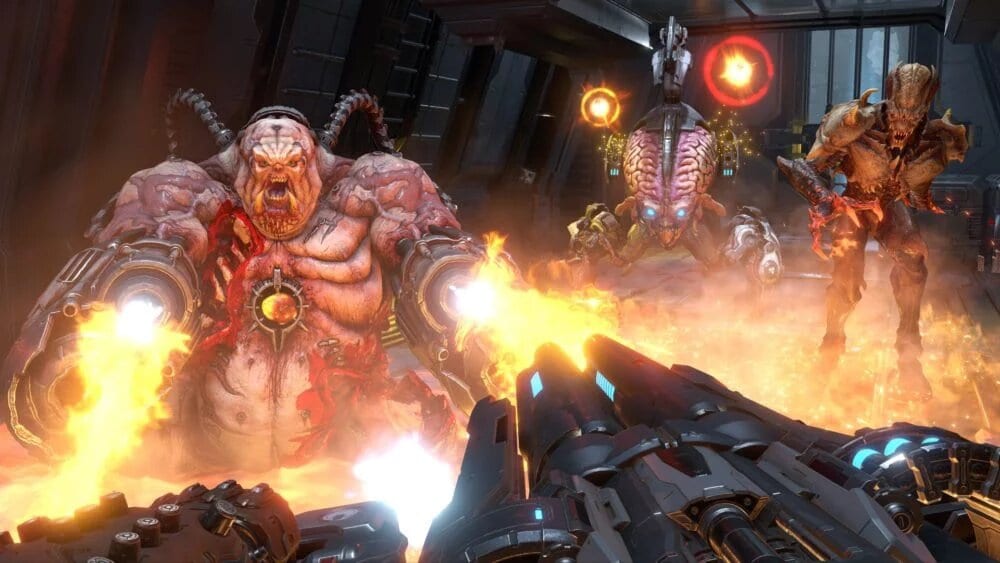 Doom Eternal gives you a bunch of super powerful weapons to use in your assault on the demon world. While they’re good in their default form, you can add mods to them to make them even more powerful. So that you can take advantage of the extra power, here’s everything you need to know about how to equip and use weapon mods in Doom Eternal.

To introduce you to them, mods are extra abilities that you can unlock for each of the Doom Slayer’s weapons. They are things like a Heat Blast from the Plasma Rifle or a hook for the Super Shotgun that brings you close to enemies in an instant.

You can then unlock upgrades for those mods and even a Mastery that gives them an even bigger boost once you’ve completed a challenge.

How to Equip Weapon Mods in Doom Eternal

It’s generally pretty easy to unlock Weapons Mods if you do a bit of exploration as you play. As you make your way through levels, you’ll come across floating robots that will be flashing blue. They’re quite easy to spot, but are missable if you don’t search thoroughly.

Interacting with them with R3 will allow you to unlock a mod for your weapon of choice. You can choose any of the options for the weapons you’ve unlocked at that point in the game. You can only unlock one of these at a weapon mod bot, so choose carefully.

As we mentioned above, you can then upgrade these weapon mods further by collecting Doom Eternal Weapon Points. Weapon Points are awarded throughout levels for completing all encounters – killing all enemies. There are 10 to earn in each level, but some are reserved for the far more difficult secret encounters and slayer levels.

You’ll likely get five or more in one level, so they crop up pretty regularly, helping you upgrade weapon mods a lot. You can then spend them by pressing the touch pad if you’re on PS4 (View button on Xbox One) and using R1/RB to tab over to your Arsenal.

Then, press X/A on the mod you want to upgrade, then spend however many you like on the two options.

Then finally, to boost the weapons mod even further, there’s a mod mastery option that unlocks once you’ve bought all mods and upgrades, and completed a challenge.

For example, one of the Combat Shotgun mastery challenges is to “kill 15 Pinkies with the Full Auto mod” which unlocks the ability to see an enemy drop shotgun shells when killed using the Full Auto mod.

Then, to use the mod while in combat, you just need to hold L2 if you’re on PS4 (LT on Xbox One) and it’ll be active. You can also use up on the d-pad to switch out the gun’s weapon mod if you have both options unlocked.

In short, to equip and use weapon mods in Doom Eternal

That’s everything you need to know about how to equip and use weapon mods in Doom Eternal. For more tips and tricks on the game, be sure to check out our wiki guide or search for Twinfinite.