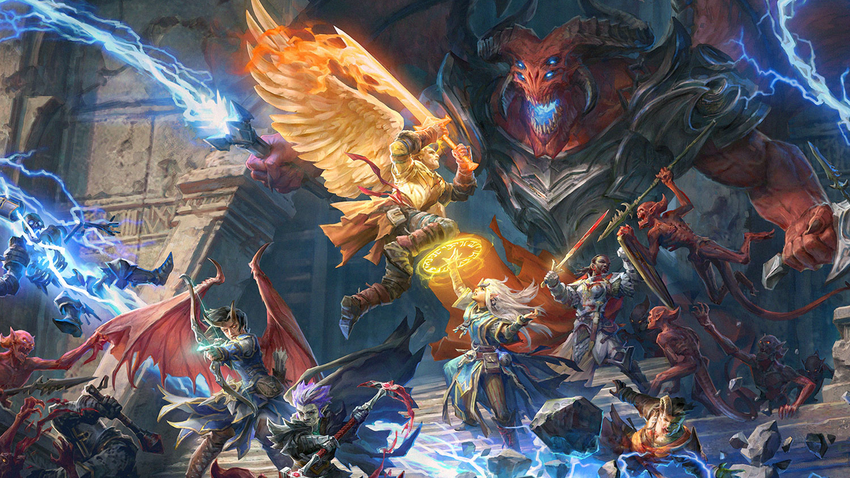 There have been many isometric RPGs in recent years that have echoed the design of the genre’s late-1990s heydey, but none of them are quite like Owlcat Games’ Pathfinder: Kingmaker.

Designed with a philosophy that adheres more strictly to the pen-and-paper ruleset it’s based on, Kingmaker is an extremely faithful video game adaptation of a TRPG. This has won over a substantial fanbase of passionate players, though it’s also guilty of isolating others as a result of its often daunting depth and lack of solid tutorials.

Now, the studio is planning an even grader sequel called Wrath of the Righteous, but they’re intent on learning from past mistakes and producing something that’s both a complete TRPG experience and more accessible to newcomers.

To get the gist of how Owlcat Games is approaching the development of Wrath of Righteous, Twinfinite spoke with the studio’s creative director, Alexander Mishulin.

Alex: While Pathfinder TRPG players would have been in their element, Kingmaker wasn’t the most accessible isometric RPG at launch. Are there plans to make Wrath of the Righteous easier to understand and less intimidating this time around or are you committed to designing Wrath of the Righteous first and foremost around the TRPG ruleset in the same way?

Alexander Mishulin, Creative Director at Owlcat Games: While making Pathfinder: Kingmaker two of our main goals were to expand the pen-and-paper experience to the CRPG, and also to revive the great old school hardcore CRPG experience, the one we grew up on ourselves.

While we succeeded at it and received good feedback from the hardcore audience, we understand that the huge Pathfinder system ruleset was left tricky and unclear in many ways for the new players unfamiliar with the tabletop game.

We want to fix that in Wrath of the Righteous, to make it more approachable to the players, to explain the rules better and make situations that are difficult (in terms of rules) more easy to understand. And of course, we are leaving space to think and explore, and providing opportunities to learn for those of the players who want it.

To make it so, we decided to develop not just some special tutorial, but a whole new learning curve system that spans through the whole game and helps the player in a number of ways, and is on hand anytime they need it. We are making this system non-intrusive, so the players who prefer a bit more old-school approach can play in the way they love so much.

Alex: Following on from above, would you say that players who don’t know D&D games can play Wrath of Righteousness? What kind of prerogative is being placed on more thorough tutorials and making the game a little more intuitive to newcomers this time around?

Alexander Mishulin: Yes, they can. Although the game is still designed for the players who are willing to put some effort into studying the system, we want it to be accessible by those who are not familiar with pen-and-paper RPGs.

Alex: Kingmaker featured branching dialog, but its choice/consequence system was perhaps slightly less developed in comparison to some other games in the genre. Are you planning on expanding the focus on branching dialog this time around and incorporating a stronger focus on multiple endings?

Alexander Mishulin: I wouldn’t agree that the choices system is less developed [than other games in the genre]. In fact, we believe that branching dialogues and choice variety are among the strongest features of our game – the Kingmaker contains more than 1,2 million words!

Most of those words are devoted to providing the players with a multitude of choices with meaningful consequences. There are many ways you can solve different quests and you can roleplay character of any alignment, with choices supporting this roleplay.

Your alignment changes according to your decisions and special dialog options become available. Some of them change your playthrough quite significantly. For example, at the beginning of the game companions join your party according to the decisions you made. Or at the 2nd chapter of the game some characters are able to befriend trolls or kobolds, leading to special dialogs, consequences that span up until the final chapter of the game, new vendors, special options in the development of the kingdom and unique epilogues.

Speaking of epilogues, there are 6 major outcomes of the story and epilogues for the most important events and decisions throughout the game. There are 171 epilogue texts in total to cover that. And this entire system is connected to the kingdom development – depending on your choices, the visuals, the dwellers, the whole surrounding mood and the way people in the capital are talking and reacting would vary.

Alex: Do you have new writers or notable new team members on board to help with story and quest design at all?

Alexander Mishulin: Almost all narrative team members who worked on Kingmaker return to their roles in this new project, with a couple of newcomers as well. And we’re also happy that Chris Avellone is back on board lending a hand and supporting the narrative team as he did with Pathfinder: Kingmaker.

Alex: Will kingdom management be a returning feature and how has it expanded for Wrath of the Righteous?

Alexander Mishulin: The kingdom management and the reactions of the kingdom to your alignment and decisions were a special feature of the Kingmaker for us. We want to continue with the idea of implementing additional layers of gameplay, widening the gaming experience and giving the additional flavor to the role the main character finds themself in.

Of course, in Wrath of the Righteous, it will be presented in a whole different way – adapted to the new game setting and story. We will be ready to reveal the details really soon – stay tuned.

Alex: How do you plan to improve on the combat mechanics this time around, if at all? Is there an impetus to either go further toward real-time or turn-based? As in, will the ebb and flow/pace of combat be sped up or slowed down at all?

Alexander Mishulin: We are focusing on the RTWP system and working on the improvements to the system used in Pathfinder: Kingmaker. Those changes should make combat more readable both in terms of the actions of the enemies and the orders that the player gives to the party. But the game production is still in the early stages, so some additional changes could be expected after the playtests.

Alex: What were some of the biggest lessons the team has learned since the first game from community and critic feedback? Have you been convinced to address balancing/difficulty curve, quality of life improvements such as the ability to speed up time, fast traveling directly from the throne room to the world map, better AI controls, etc?

Alexander Mishulin: Yes, we are very grateful to our community. Through this year since the release, we’ve been gathering the fans’ opinions, learning a lot, and already improved a ton of features.

We made the Enhanced Edition with a number of improvements across the board that makes the game we envisioned better. We are continuing support of the game, and still doing patches and adding small features.

Alex: What can the team learn from other successful isometric RPGs like Divinity that have managed to transcend the D&D genre somewhat and find new audiences?

Alexander Mishulin: Every new game in the CRPG genre brings something new to the table and evolves genre a bit. Some of the changes make the genre better, while others are applicable to one particular game.

We like making games based on the Pathfinder role-playing system with a strong story, a lot of choices and consequences, the whole roster of detailed companions and deep mechanics that allow players to build very different characters.

We review every new decision and change in the genre that improves on these aspects and try to understand: Will it work for us? Will it make the game better? How can we achieve similar results but in our game with our system? If it fits the game – we act upon it. That is true for the Divinity: Original Sin series, Pillars of Eternity series, and more recent Greedfall, Disco Elysium, Outer Worlds or even Fire Emblem: Three Houses.

Alex: Can we expect higher overall quality in terms of technical performance this time around with Wrath of Righteousness eg. better visuals, shorter load screens, fewer bugs, etc? Assuming you’re confident that will be the case, why is that? What have you changed that might result in stronger performance (ie. is it an experience thing, or have you changed engines, etc)?

Alexander Mishulin: Yes, it will be a step forward for us. We are working hard on the performance aspect of the new project and we also are intended to keep the level of visuals up to the modern standards. Though, we are not ready to give out more details on that just yet.

Alex: Pathfinder is a CRPG, of course, but would the team ever consider a console release?

Alexander Mishulin: We are working on a console release for Pathfinder: Kingmaker now and would like to see how it will perform on these platforms, before making any serious decisions for the new project. The console port for the Kingmaker will be released in 2020, and we will reveal the release date later next year.

You can read Twinfinite’s review of Pathfinder: Kingmaker for more detailed impressions on the game when it first launched. It’s important to remember, though, that Owlcat Games has since released an Enhanced version of the game and addressed several issues with subsequent updates.