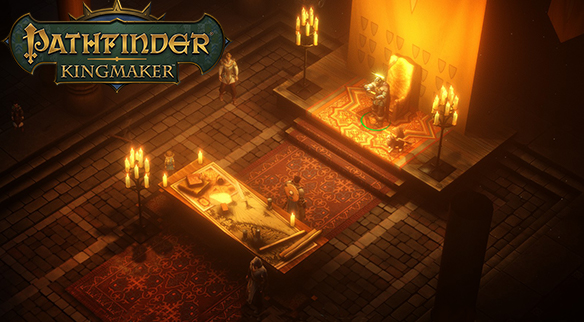 Featuring an intricate, detailed world, Pathfinder: Kingmaker may contain one of the most expansive adventures ever seen in a CRPG. But like a gathering storm, the game takes a long time before events strike to a breathtaking pace. That storm culminates into a truly expansive world. Overworld map exploration reveals hundreds of quests with branching moral choices. Excellent character development and an endless supply of universe-expanding lore form exciting stories. Furthermore, the spiderweb of consequences holds considerable replay potential for RPG completionists.

The game undoubtedly has hundreds of hours ready for players, with each new location adding depth to their personal journey. But an avalanche of immersion-breaking and potentially devastating issues prevent the game from realizing its full potential.

The story begins in the free city of Rostland, as players control one of many adventurers seeking fortune in Brevoy. Thrill-seekers have gathered at the behest of the Aldori Swordlords, who promise the barony of the untamed Stolen Lands.

The Swordlords’ reward results from the vile tyranny imposed by the Stag Lord, the Stolen Lands’ current ruler. He’s a bandit leader completely beyond redemption, employing brutal tactics and dark magic to terrorize the region’s citizens.

But their offer doesn’t come from purely altruistic motives, as players later learn. The Swordlords hope a stable ruler in the region could deter a potential conflict brewing in Brevoy. A decades-long power vacuum has left the northern Surtova and southern Aldori cultures at odds for 50 years. The political establishments of both assume civil war is inevitable – and seek assurances for victory in the coming struggle. Consequently, the Aldori look to tip the balance with a staunch ally entrenched in the south.

Armed with the full lowdown of Brevoy’s expectations, the player sets off to clear the Stolen Lands of the preying bandit lord. As the elected head of their party, the first act serves to introduce players to Pathfinder: Kingmaker’s various mechanics. As a result, the game shows how combat, dialogue interaction, and optional quests intertwine into the main questline. By crippling his command structure and coercing his allies to the player’s cause, the Stag Lord eventually falls by the player’s hand.

From here, players can finally expand their reach into the heart of Pathfinder: Kingmaker through their rule of the Stolen Lands.

After ascending to the barony, the player opens up Pathfinder: Kingmaker’s unique kingdom management system.

For players find mounting issues building in the growing region. As a result, their attention is demanded across various projects through region building and instanced situations. The second act of the game focuses upon the baron’s efforts to civilize the wild territory. Consequently, quests center around subduing various barbaric races to make way for the barony’s development.

What ultimately saved the game were great companion quests and the consequences brought about from kingdom management. Seeing the baron’s capital go from a small village to a sprawling metropolis made these decisions feel impactful. That impact only increased as the small barony turned into a cluster of territories stretching across the map. As questlines became more epic and grandiose, kingdom management grew greater in scale alongside it.

At a certain point in the story, the baron’s path promotes recognition as the sovereign of a budding kingdom. From the fertile West to the mountainous Eastern regions, conquest plays a key role for progression throughout Pathfinder: Kingmaker. Furthermore, personal moral choices help shape the direction the developing nation eventually descends. From chaotically good to lawfully evil, the sovereign’s lands reflect whatever the player chooses throughout the game.

Growing from a small village into a vast kingdom doesn’t happen immediately. The gradual territorial growth is fantastically done – striking a unique balance between statistical upgrades to resolving political disputes. But several problems exist in Pathfinder: Kingmaker which hamper the game’s enjoyment.

Pathfinder: Kingmaker harbors many issues, carrying over into every single play session. Typos are prevalent throughout most quests, as are grammatical inconsistencies. Scripting issues cause whole paragraphs of dialogue to disappear towards the end of a decision chain. Similarly, invisible markers appear for choosing spells when leveling characters up.

Technical issues aside, Pathfinder: Kingmaker also holds nasty difficulty spikes sprung seemingly out of nowhere. The difficulty slider can alleviate the problem to a degree – but constant tweaking seems required throughout the game. At the moment, these frustrating spikes are present throughout every stage of the game. With enemy HP appearing so vague, party wipes happen way too often during encounters.

The common bugs, issues, and frankly frustrating mechanics drag down an otherwise enjoyable experience. To Owlcat’s credit, hotfixes have been released nearly every day since the initial launch. But even with these fixes, Pathfinder: Kingmaker remains an unpolished mess at the time of review.

The case in favor of Pathfinder: Kingmaker comes with an overwhelming series of excuses. Epic quest lines exist, but a boring second act hampers them. The kingdom management shows unique advancement, but it houses nasty unresolvable events that result in a game over. Companions develop along fantastic storylines of their own but share mundane paths with mediating low-stakes conflict. With frequent technical issues on top of these, Pathfinder: Kingmaker remains hard to recommend at the moment.