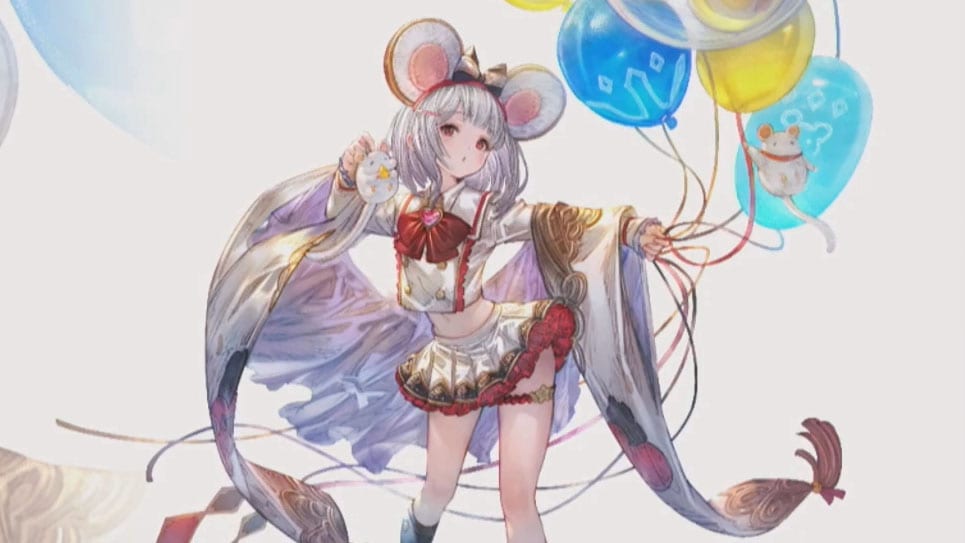 The reveals were made during a livestream from Granblue Fantasy Fes, which is being held at the Makuhari Messe in Chiba, near Tokyo.

, First of all, we get to see three new characters, a new version of Yuisis, Grand Noa, and a mysterious assassin named Helel Ben Shalem.

On top of that, the New Year Event will include proving grounds and it’ll come with an SR version of Kumbhira to say goodbye to the year of the pig.

The new Divine General for the year of the rat is named Vikara, and she’s actually human, unlike her colleagues. Her mouse ears are an accessory.

If you feel that she looks like a schoolgirl going to Tokyo Disneyland… that’s because she really does. She is voiced by Atsumi Tanezaki. You may know her as Faye in Fire Emblem Echoes: Shadows of Valentia and Zara in Azur Lane.

Mahira is getting her new star, while Tweyen, Lily, and Shiva will get New Year skins.

In January the Code Geass crossover event from last summer will return as a side story.

Then we move on to the news for the sixth-anniversary celebration (which will be in March).

The rank cap will be upped to 275 and two new tier 4 jobs will be added. One is the Lumberjack (you can see a rough sketch by Hideo Minaba in the gallery), which uses axes and harps. The second is still a secret and it’ll be announced in March. Neither has a pre-requisite job, so the unlock requirements will be specific.

On top of that, all players will be able to simply pick an Eternal and add it to their crew. Those who already have Eternals can decide to receive a Gold Brick instead.

After that, we get to see a trailer teasing “Arcarum’s Transition – Replicard Sandbox” and related weapons, coming in the summer.

Battle System 2.0 will be introduced gradually, but it won’t be a revolution compared to the current mechanics.

During those events we might get news about the upcoming console games as well (Granblue Fantasy Relink and Granblue Fantasy Versus for PS4), even if the most likely announcement venue is the anniversary livestream in March.

Lastly, we see a trailer for the 6th-anniversary main story event.

If you want to learn more, you can check out the announcements from yesterday.