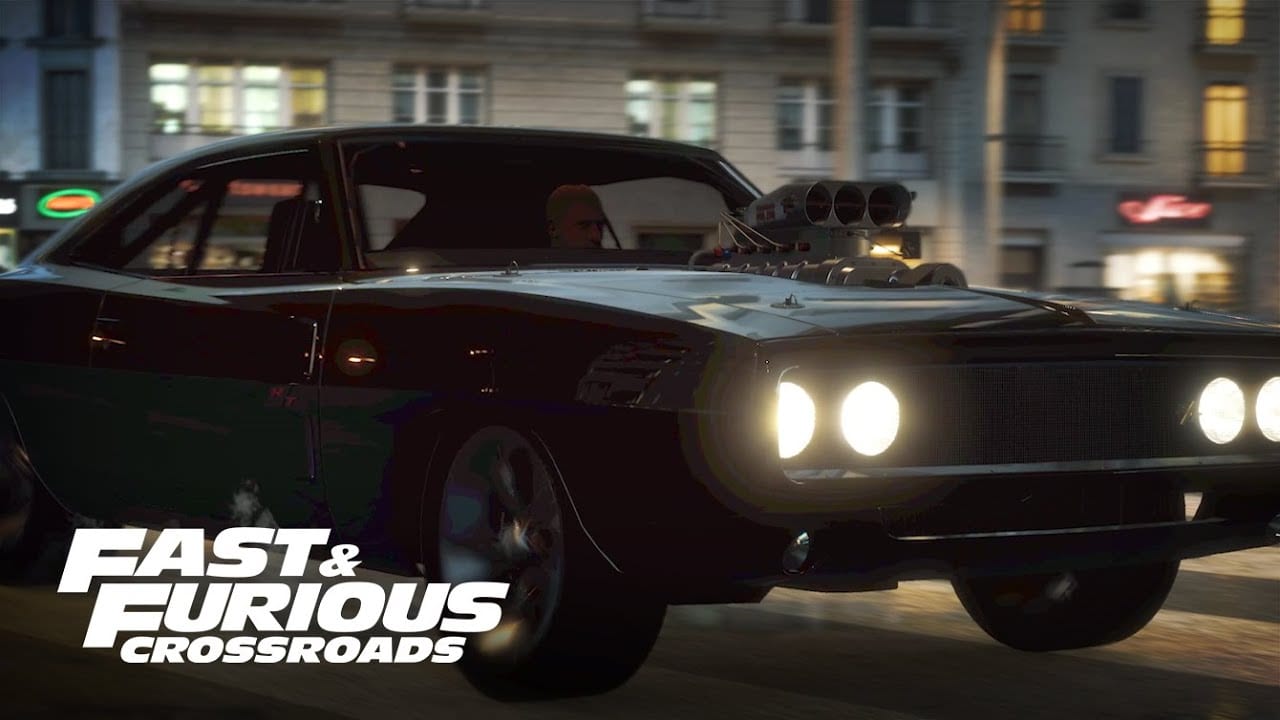 The big closing announcement of The Game Awards wasn’t a new trailer for Breath of the Wild 2 or the reveal of the new Smash Ultimate DLC character. Instead, Michelle Rodriguez and Vin Diesel came on stage to give out the GOTY reward and show off the trailer for Fast & Furious Crossroads, which seems to be the big budget game fans of the film series have always wanted.

The trailer has everything you’d expect. Diesel himself is there looking moody behind the wheel of a Dodge of somekind, Tyrese is there to crack jokes, and someone else jumps from a dune buggy onto a moving train. It’s suitably batshit.

While it looks like Fast & Furious, it doesn’t necessarily look… good. The cutscenes look quite awkward, the racing looks generic, and Vin Diesel looks like someone drew him from memory.

The reactions to the trailer weren’t positive either, with the “this game looks old” tweets flying around. You can’t really say those reactions are unjustified though; just looks at some of the screenshots in these tweets:

Speaking of The Wheelman, Vin Diesel and the Fast & Furious franchise don’t have a good history when it comes to quality video games.

The Wheelman was an entertaining stunt racer that was strangely more interested in advertising itself than being a good racing game and the likes of Fast & Furious: Showdown are best forgotten. The Xbox 360 version of the latter has a rating of 22 on Metacritic.

An ugly trailer and a history of terrible video games don’t inspire confidence in Fast & Furious Crossroads. Being disappointed that the game ended The Game Awards when most were expecting something bigger and more exiting is fair enough.

However, there are reasons to be excited for its release next May, one of which suggests that the game will be a lot better than it looks.

Crossroads is being developed by Slightly Mad Studios, who aren’t a name to be scoffed at. The London based studio, which was recently acquired by the masters of racing, Codemasters, have a pretty impressive pedigree.

They first rose to prominence as the developers of Need for Speed: Shift and Shift 2: Unleashed, the track racing spin-offs of the biggest racing game brand around.

Without cops, open-worlds, and EMPs, the Shift games were more serious than the series usually was, but the driving was still pretty arcadey and easy to pick up. They were good too, proving that Slightly Mad were the up and coming developers in the genre.

After a couple of other forgettable games, their Project Cars series began. It wasn’t initially funded by a traditional publisher, being produced on a relatively low budget, but it quickly became regarded as one of the best simulation racing titles around.

Then, the sequel took things a step further, cementing Slightly Mad’s place among the racing elite with various Racing Game of the Year wins and nominations, including at The Game Awards themselves.

It was quite a hardcore simulation, and would be tricky to get to grips with for racing novices, but its class was undeniable. It seems to be pretty successful too, reaching number two in the UK charts when it released.

Then, the Codemasters acquisition came following the announcement of Project Cars 3. Codemasters are the big name in the racing world. Just this year, they released GRID, Dirt Rally 2.0, and F1 2019, which are arguably the three best racing games 2019 has had to offer.

Away from the Gran Turismo and Forza series, they almost have a monopoly of racing sims, so adding Slightly Mad to their ranks makes sense and proves the quality of the UK studio.

That has me excited for Fast & Furious Crossroads. Slightly Mad’s developing chops are clear to see, so it’ll be interesting to see where they can take a game that’s not track focused.

The Crossroads press-release calls it a “a team-based, vehicular-heist action game,” which is a little different to Slightly Mad’s usual work, but with the budget and craziness you’d expect a Fast & Furious title to have, it could be a lot of fun.

It looks like visuals are going to take a hit, especially when compared to the Project Cars titles, but the actual driving should be great, which would be a step forward for the F&F video game franchise on its own.

Yes, it looks a little like Vin Diesel has stepped out of a PS2 game and into another that’s releasing just six months before the PS5, but Slightly Mad studio’s involvement points towards it being a quality racing game at the very least.