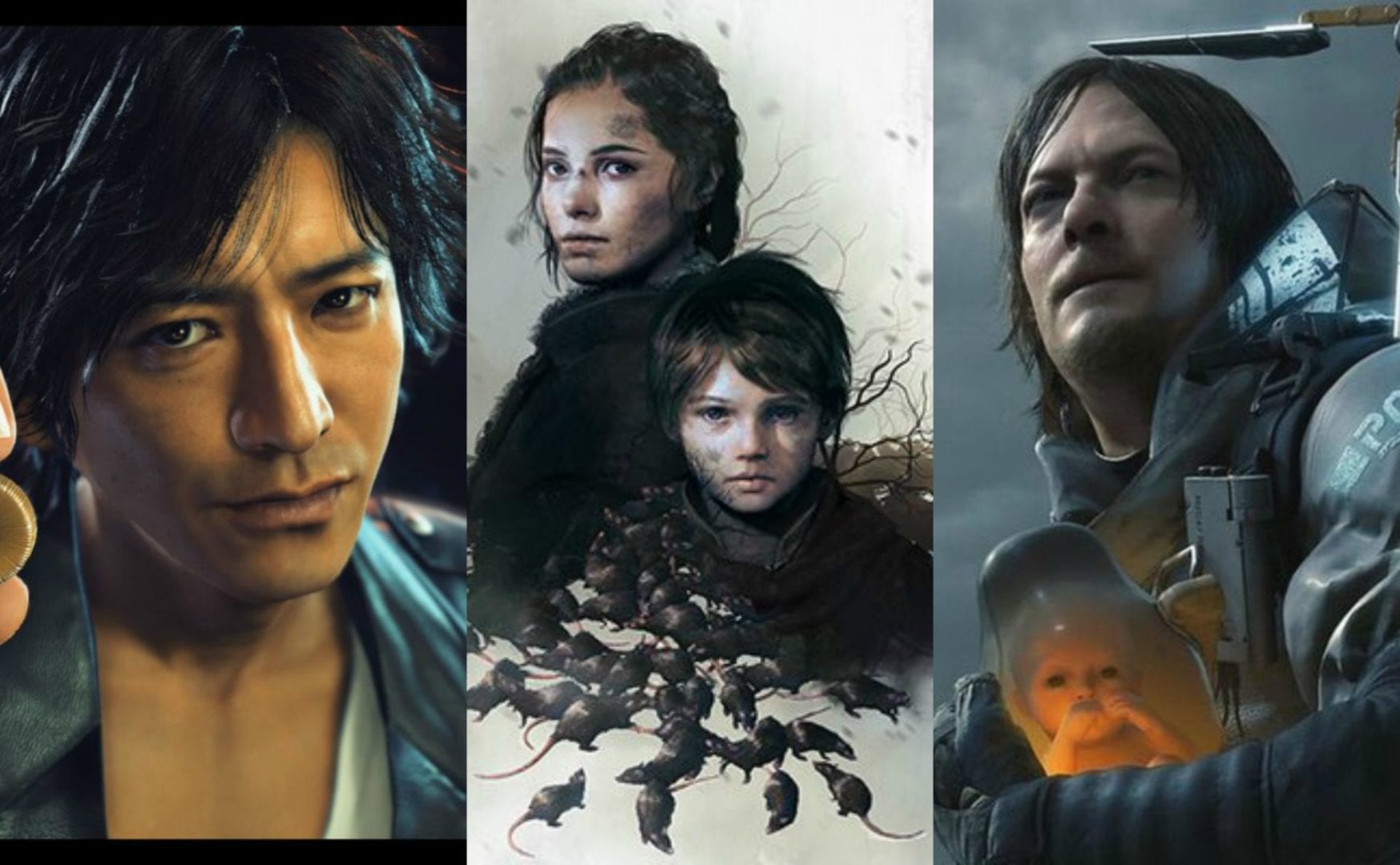 This year has been a largely transitional one for the video game industry as we look toward the next console generation, but there have still been some exceptional games worth celebrating. As part of Twinfinite’s annual award ceremony, we’re today reflecting on those with the best stories and writing of 2019 and crowning one overall winner. The following games have been voted by our team of editors as having the most compelling narratives and engaging writing.

Things only got stranger from there, and we then spent the next three years trying to work out how celebrity cameos, historical battles, and anti-matter ghosts could possibly come together to create a single cohesive story. Now, just a month after its release, we have our answers.

Death Stranding’s story is heavy stuff. Political ideologies, social commentaries, and the exploration of themes like love and friendship mean you’ll have to be concentrating during the game’s many lengthy cutscenes to have any idea what’s happening. It’s not always vintage stuff, sometimes more confusing than compelling, but its overall story is certainly very ambitious and totally unique.

Even despite the story’s wonky pacing and the writing’s tendency to get bogged down in technical jargon, the uniqueness of Death Stranding’s story is engrossing in a way that always has you wanting to push forward and uncover more. It’s just a pity there’s so much clutter in between each revelation.

Senior Editor Hayes Madsen: The Force Unleashed 2 in 2010 was the last true single-player Star Wars game that we’d seen before this year, and because of that, expectations for Jedi: Fallen Order were high. Somehow, it manages to live up to those expectations with a fantastic sense of exploration, hard-hitting lightsaber combat, and maybe most importantly, an enthralling story that captures the underdog essence of the original films.

Fallen Order introduces a brand new Jedi Padawan named Cal Kestis, who’s surviving on a small backwater scrap planet after Order 66. Cal is a fine character on his own, but what makes him truly fascinating is the way he deals with the Force. Cal has lost his connection to the Force due to trauma and has to re-establish it.

Fallen Order’s story deals with some seriously dark themes like revenge, and it does a lot to show the relationship between the Dark and Light sides of the Force. The ragtag crew that joins Cal are all likable in their own way, from the slightly shady pilot Greez to the disgraced former Jedi Cere.

There are also plenty of little odes and references to other parts of the Star Wars series, like Rebels and The Force Awakens. Fallen Order is what Star Wars fans have been clamoring for all these years, and while it certainly has its fair share of problems, its story is sure to keep any fan enthralled.

News Editor Giuseppe Nelva: Shadowbringers is an expansion, but it easily stands on its own for storytelling, providing plenty of narrative goodness that it could almost be considered a JRPG in its own right.

As far as I’m concerned, it’s by far the best story the gaming industry produced in 2019 with plenty of moving moments mixed with adventure, comedy, mystery, and even a dip into darker themes that some may not have expected. It’s an epic sequel to an already beautiful story that has made players feel invested into their warrior of lights (now warrior of darkness) for ten years.

We have been living in Eorzea for a large portion of our adult lives. We have made and lost friends. We have celebrated and even mourned them. Nothing else compares.

Guides Editor Chris Jecks: Outer Worlds has clearly taken a lot of inspiration from the Fallout series. From lockpicking to hacking, the Tactical Time Dilation feeling very similar to VATS and even conversations with NPCs feel eerily familiar. Where it doesn’t feel like a carbon copy, however, is in its narrative and writing which sets it apart as one of the finest RPG stories to release this year.

The premise is simple, you’re a member of the Halcyon Colony, unfrozen from your cryosleep in space to try and save them. Turns out someone wanted to leave the colony frozen in space forever, so it’s down to you to track them down and uncover the mystery.

Where Outer Worlds’ story and writing truly shine, however, are the ways in which the corporate-dominated world is talked about by the NPCs. The manner in which Outer Worlds’ planets are all focused on the idea of corporate overlords and a lack of rights for workers feels very much like an ominous look into our future if we don’t change paths and allow our consumer-greed to take control.

It almost acts as the perfect backdrop to paint yourself however you see fit. You can side with the corporations, almost acting like their mercenary, getting things done for your own personal profit, or you can be a bastion of hope for the little people in the galaxy. It’s these relationships you build and the manner in which people talk about their plights that strengthens your resolve to get things done. It’s a rag-tag space adventure with a serious, driving narrative.

It’d be wrong of me to write this blurb, professing my love for Outer Worlds’ writing without touching on THAT personal quest. The one with Parvarti. For those unaware, Parvarti is a companion you meet very early on in the game. While I’ve already spoken at length about Ashly Burch’s fantastic job voicing Parvarti, the core depth of this character truly comes from the exceptional writing.

Parvarti is asexual. She doesn’t lust for an intimate relationship, and the way she talks about this with the protagonist when faced with the potential for romance is so sincere and true-to-life. She toils over her words, gets carried away when she gets a positive response, and gets philosophical when things look bleak.

This personal quest may have been the one that really stole the show in Outer Worlds, but each companion has their own instance of this that helps you learn more about them, and enjoy more of the excellent writing at the heart of Outer Worlds.

News Editor Giuseppe Nelva: Judgment is basically a Yakuza game with a different protagonist and a generous sprinkle of investigation dropped into the mix. As such, the bar for storytelling is set very high.

Unsurprisingly, the Ryu Ga Gotoku Studio did not disappoint, showing once more that its narrative and gameplay formula can be applied to different stories and different heroes (if Fist of the North Star: Lost Paradise wasn’t enough evidence).

Soon Yakuza: Like a Dragon will have to prove that it can be applied to entirely different genres as well, but for now, Judgment provides a masterfully told story with engaging characters and enthralling narration, mixed with great action and a different point of view on everyone’s beloved Kamurocho.

Senior Editor Alex Gibson: A Plague Tale: Innocence surely has to go down as one of 2019’s big surprises. Little known before its release, developer Asobo Studio has since shot into the spotlight after earning critical acclaim on the debut of this fantastic new IP, which centers around a fascinating tale of two siblings struggling to both survive and make sense of a dangerous medieval world.

The extent to which story and writing are at the core of A Plague Tale: Innocence‘s appeal feels like a breath of fresh air amid an industry that often feels as though it’s moving in the opposite direction. This genuinely is the video game equivalent of a page-turner and one that video game equivalent of a book worm simply won’t want to put it down.

A Plague Tale: Innocence marries its captivating setting a mysterious tale that keeps you guessing throughout. This intrigue keeps you pushing forward, ever enthused to see what’s around the corner. I think the game serves as a reminder that storytelling in video games is often at its best incorporated into more linear level design. Asobo never wants you to stray too far, less you lose the pacing and intensity of the story.

Not that A Plague Tale: Innocence doesn’t have its quieter moments, though. The highs and lows are wonderfully paced, with quality writing bringing its characters to life in a way that had me totally invested from start to finish. Combine all this with sublime voice acting and brilliant quality of production and you have the best story-driven video game experience of 2019.