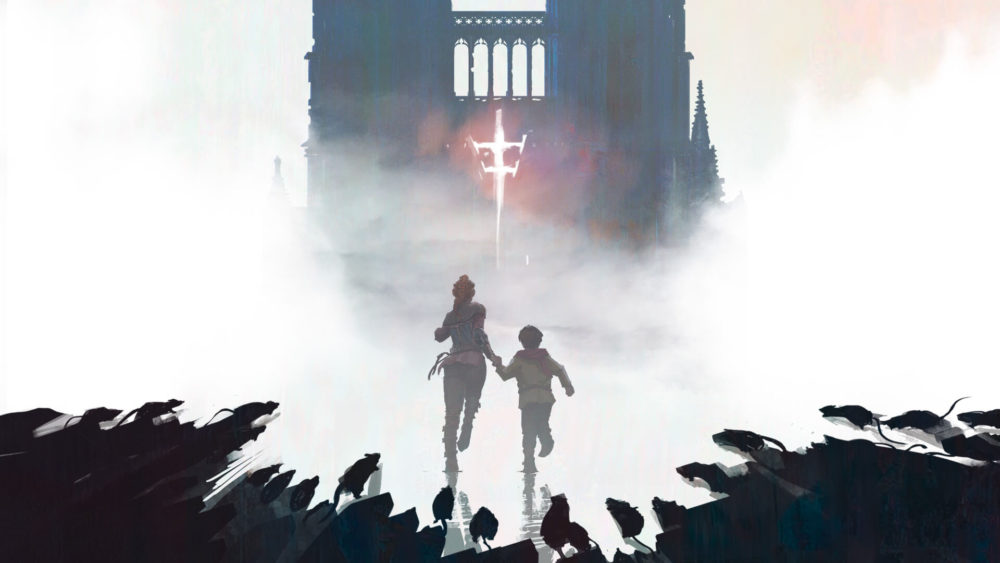 A Plague Tale: Innocence on PlayStation 4

Every so often, a game comes along that is way better than anyone expected, successfully bringing something new to the table while wearing its inspirations on its sleeve. A Plague Tale: Innocence is one such game.

Set in 1348 France during the Black Death, the game follows Amicia De Rune, the daughter of a knight and an alchemist with dreams of one day becoming a heroic knight herself.

She and her family live a life separated from the horrors of the outside world until an Inquisition force assaults her home, killing most everyone she knows.

Their goal is to capture her younger brother Hugo, who Amicia’s parents have kept hidden and seperated from her all his life due to an unknown illness that is linked to the waves of rats spreading disease through the continent.

With no other options, Amicia flees with Hugo in tow, intent on delivering him to safety. She’ll fight and sneak her way through the plague-ravaged country, doing whatever it takes to protect Hugo and uncover the secret that lies within him. 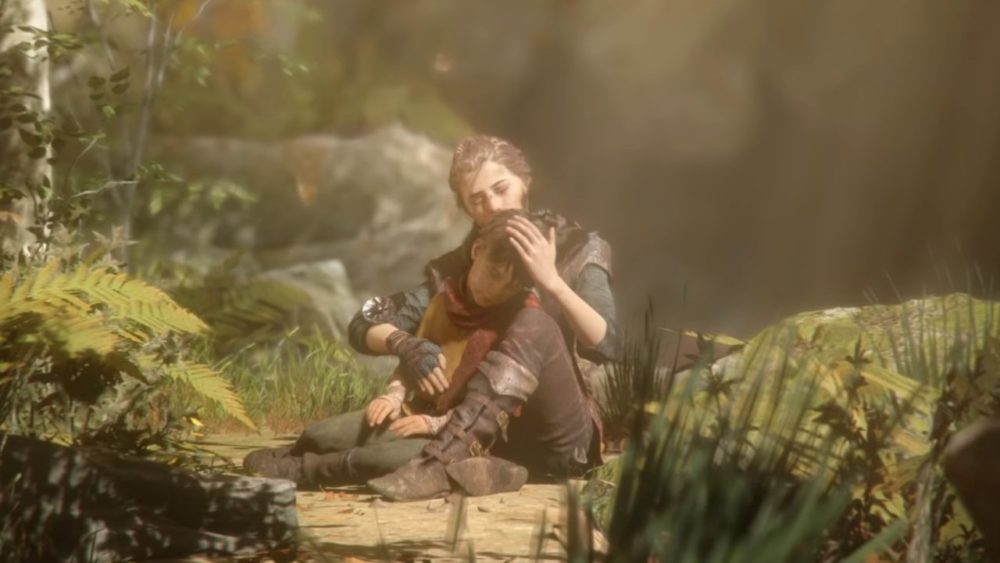 Needless to say, the premise is a novel one. Few games, if any, spring to mind that share A Plague Tale: Innocence’s setting, and developer Asobo Studio has done a great job of committing to it and breathing life into it as a whole.

Dilapidated villages ravaged by the spread of the plague, ancient castles that hide centuries-old secrets, and massive sprawling libraries full of centuries old texts all have a gorgeously animated gothic feel that’ll warm most any medieval history lover’s heart.

This is bolstered by the game’s collectibles. Each one offers a bit of history and context for its inclusion in the game, and serve to better frame the world players find themselves struggling through.

Even as these elements make way for more fantastical, dark horror themes and ideas later on, they still retain an important part in the game’s identity and serve to make the experience more immersive.

This helps it to stand out even as it clearly shows its inspirations taken from other games. Like the Darksiders franchise, A Plague Tale: Innocence takes pages from other franchises and uses them to create something new, most always for the better.

Case in point: The story and writing. Focused on Amicia and Hugo’s relationship, the game nails their interactions and character progression, slowly building up a believable bond with more personal exchanges and dialogue as well as tense set pieces.

The vocal performances given for both characters – with Charlotte McBurney as Amicia and Logn Hannan as Hugo, respectively – go a long way toward selling this and make it that much more believable.

It’s very much presented like the relationships portrayed in recent story focused, character driven titles like Naughty Dog’s Uncharted and The Last of Us or Santa Monica Studio’s God of War, and is executed just as well. 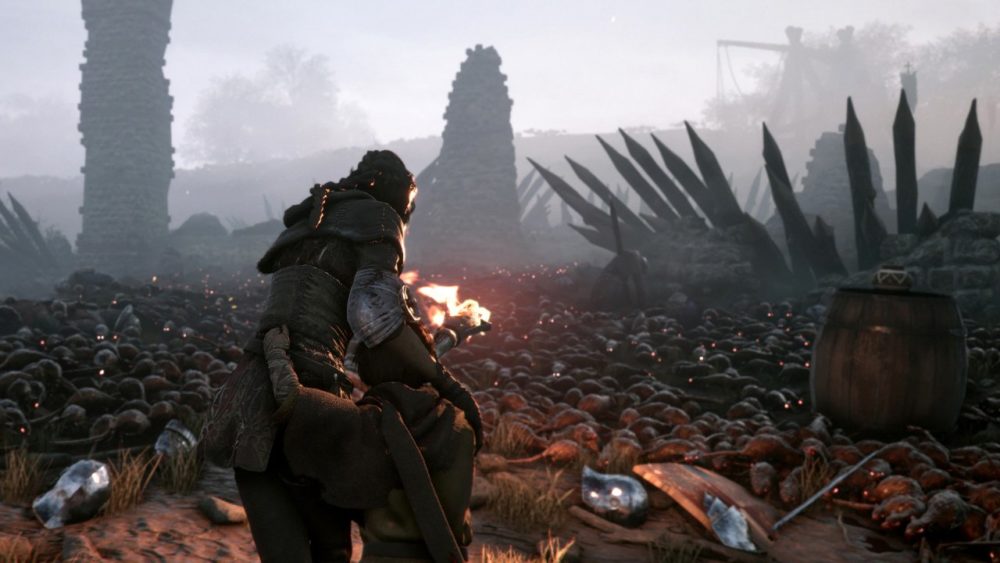 Likewise, A Plague Tale: Innocence’s gameplay is a pleasing mix of norms and design aesthetics from more recent action adventure and stealth titles.

Played from a third person perspective, players must advance from area to area, killing or sneaking past enemies and solving puzzles until they reach important story segments and advance to the next chapter.

Though the levels themselves are linear as a result, how players complete them is left up to their discretion.

Players can proceed through an area non-lethally, sneaking past guards and knocking out any that delay their progress with sleep bombs.

Or, they can carefully dispatch every enemy they come across, sniping them from a distance with a combo of armor-melting acid bombs and stones launched via Amicia’s trusty sling.

They could even leave the dirty work to swarms of rats in the area, drawing them toward guards with fire and bait to either scare them away or turn them into a meal for the vermin.

It’s all up to the player, and the choices afforded to them only increase the further into the game they progress. As a result, the gameplay feels fresh and innovative right up to the credits, and rewards those who go back looking to try out different strategies.

This is all topped off by some phenomenal sound work. Audio elements both large and small are used to masterful effect, with string work bringing the tension and horror, as well as the brief moments of wonder and levity, to life. 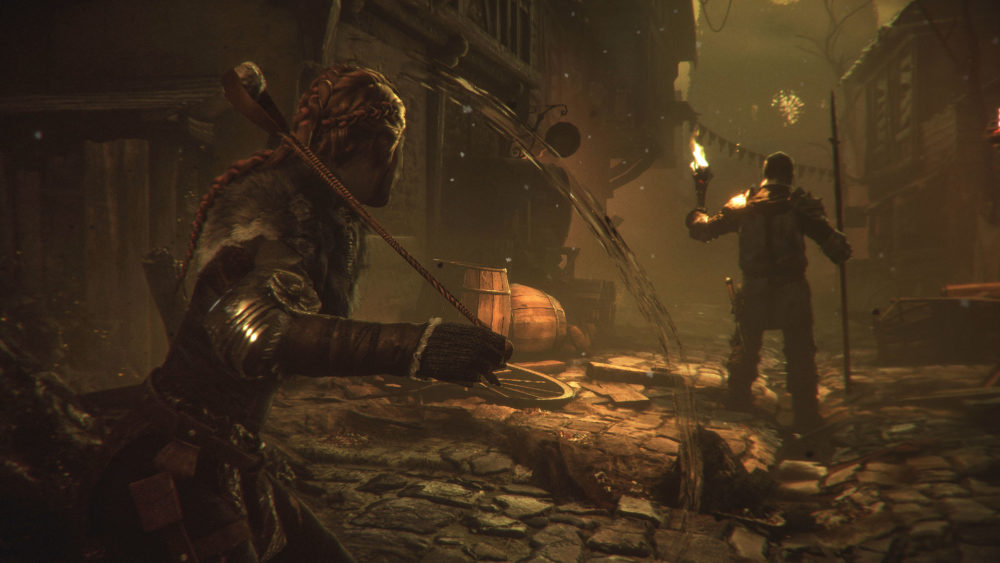 Of course, the game isn’t without its flaws. For all of the variety the gameplay provides in terms of dealing with enemies, its puzzles are all fairly easy and straight forward with few that require more than a passing glance to understand and solve.

There’s also the considerable gap between the quality of Amicia and Hugo’s story arc and characterization compared to the supporting cast’s.

While a few side characters are fleshed out enough to feel real, others feel like they exist purely as vehicles for gameplay mechanics and aren’t given enough time to develop.

This can lead to some lackluster conclusions to their story arcs by the game’s end, and while the siblings’ relationship picks up the slack for this misstep overall, it does hold some parts of the wider narrative back.

There are also some rare bugs and glitches like companion characters getting caught on the environment, which keep you from progressing and force you to restart from checkpoints.

While these bugs are easy to remedy and never lead to much progress being lost, they can cause some headaches and take players out of the experience.

Overall though, these are minor blemishes on an otherwise great game and far from reasons to pass up on it. A Plague Tale: Innocence is a late-generation gem that shouldn’t be missed by anyone with even a passing interest.