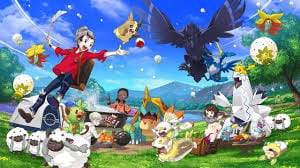 You can earn money in a variety of ways, and the game even starts you off with a fairly sizable sum to get you through the early game. It won’t last forever, especially if you have a taste for the finer things in life.

How to Get Money Fast in Pokemon Sword & Shield

The simplest and most straightforward option is by winning money after defeating a trainer in battle. This is a tried and true method and is something you will do throughout the entire game.

There are many expensive customization options available at boutiques throughout the game, and in order to raise that kind of money, you are going to need to get a little more creative. We have two methods below that have served us well so far.

For this method, you simply need to have progressed far enough into the game to have reached the Wild Area, which you arrive at very early on.

Here, there are a variety of trainers to battle, and one in particular who uses all three starter Pokemon. After defeating her, she will move to a new area, and you can battle her again for more prize money indefinitely.

While this isn’t exactly the quickest way to become a millionaire, it will make you a decent chunk of change. As you roam the area you can also be collecting Treasure, which can be found by investigating glinting objects on the ground and then sold to vendors.

The combination of these two activities will see you in good stead for the early game, not to mention giving you some valuable experience to power up your Pokemon

While somewhat more involved, the Meowth method is a very reliable way of making the big bucks throughout the game. As you might imagine, you will need to get yourself a Meowth, and at least be up to the Grass Gym in the main story.

Start by capturing a Galarian Meowth. If you already have one, great, if not you can find them along Route 4 in the long grass.

Take your new pal to the Grass Gym and inside is a helpful fellow who will trade you a regular Meowth for your Galarian variant. Make the trade.

This Meowth has the Pay Day technique, which is itself a way to earn some extra money in battle. But that’s chump change, we want to do things on a larger scale.

When engaging a Gym Leader or powerful trainer in battle, use Dynamax on Meowth. They will now be able to use the Gold Rush ability, and you will want to use every turn you can to cause the opponent to drop large piles of cash on the ground.

This will generally net you around four times what you would have originally earned, and Gym Leaders tend to pay out rather big. From the first Gym alone, you should make around 12k.

This can be further boosted by equipping Meowth with the Amulet Coin held item which can be found by the cave entrance on Motostoke Outskirts, or by buying and using the Lucky Incense consumable from the Hulbury Market.

Defeat the first several Gym Leaders in this manner and you will have more money than you know what to do with. Maybe spend a little on your Meowth, they have earned it after all!

Here are a couple of our guides that you might be interested in to get you started: