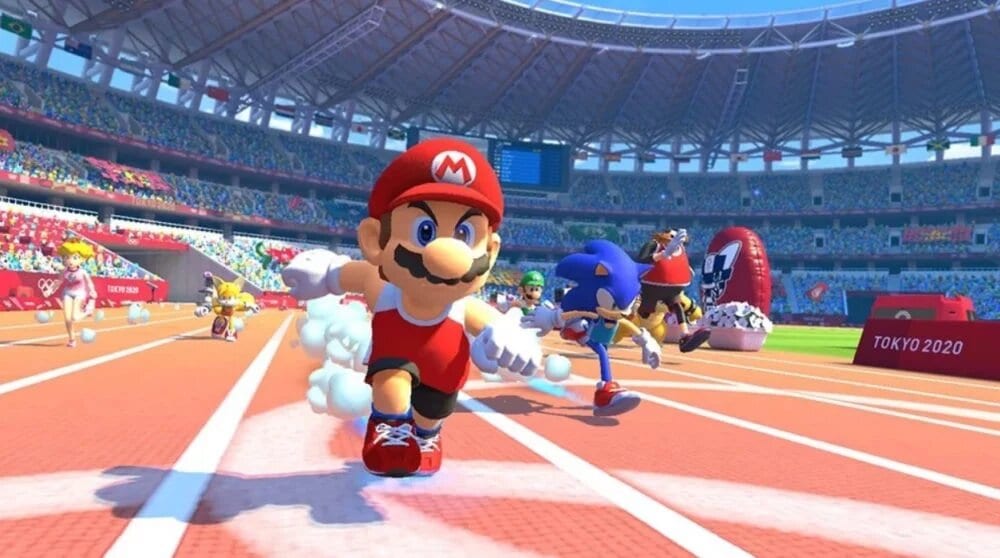 Mario & Sonic at the Olympic Games Tokyo 2020 on Nintendo Switch

Somewhat surprisingly, the Beijing 2008 version of Mario & Sonic at the Olympic Games became one of the most popular games on the Wii, selling millions of copies in a matter of weeks.

With a variety of events that matched the silly, simple appeal of Wii Sports, on top of the star power of Mario and Sonic, it shouldn’t really have been that surprising that it quickly became a hit with families and younger Nintendo fans.

The Nintendo console landscape has changed somewhat since 2008 though, with the Switch’s hit titles generally being larger scale exclusives or popular indies, but the series is still going strong in the run up to the Tokyo Olympics next summer.

While the Switch has ushered in a different era for Nintendo and handheld gaming, Mario & Sonic at the Olympic Games Tokyo 2020 keeps things very much the same.

Aside from the new 2D events and a new story that frames the events, the 2020 game is more of the same and will be easy to pick up for anyone who’s hit the track or swimming pool before as the two series’ iconic characters.

If you’re jumping in alone, the story mode is probably where you’ll head, and by story mode, that doesn’t just mean win enough events to beat Bowser and be the best, there’s an actual plot.

Bowser and Eggman are trying to trap Sonic and Mario inside a GameBoy-like machine that plays a 2D Olympics game. All four accidentally end up getting trapped there and, guess what, the only way to get out is to win gold medals. Who could have figured that out?

Meanwhile, Luigi is running around modern Tokyo to win gold medals and work out how to get his friends out of the 2D world, running into all manner of Sonic and Mario characters to get some help.

It’s silly, yeah, but it’s a good way to break up the events and make it more than a tutorial for jumping into multiplayer.

The issue though, is that the story is told too slowly. Characters often gesture wildly after every sentence, leaving you sat waiting for more to read, there’s a lot of talking anyway, and you often have to run around the individual areas of Tokyo to find the objective that doesn’t show until you’re right next to it.

I could barely keep my attention focused on the repetitive conversations, so I don’t see it keeping the younger audience engaged for long. Breaking up the events is good in theory, but Mario & Sonic at the Olympic Games’ story mode shouldn’t be 75% reading and getting lost on the map. To be blunt, it’s just boring.

The actual gameplay of the story mode is great though. You’re not limited to the basic events, which are fun in their own right, but there are mini-games scattered throughout that incorporate some of the same mechanics.

You’ll still be doing the standard events, but you’ll also be climbing an Eiffel Tower to grab a key card using the Climbing event mechanics, or chasing after a train Eggman is escaping on using the Hurdles mechanics.

Then, you’ll be using binoculars to find particular Toads for Yoshi in a crowded Shibuya crossing.

The minigames are the reason to play the story mode, as they’re something fun and inventive that you can’t play elsewhere, and they help you get to grips with the gameplay mechanics so that you cruise to the gold medal once you jump into the multiplayer.

Speaking of multiplayer, it’s the local splitscreen that has caused the Mario & Sonic Olympics games to be so popular over the years, it’s here in this game, and so that trend will probably continue with Tokyo 2020.

It’s frustrating that there aren’t any options for creating playlists of events, and that splitscreen can make button prompts difficult to see in events like gymnastics (especially in handheld) but the majority of events are just complex enough to make them engaging, but not too much so that newcomers will be scared off.

Swimming will test how well you can keep a rhythm, 110m Hurdles is all about your reactions, and Surfing is based around risk and reward. It’s lighthearted fun that’ll be great for a few rounds with the family.

The 2D 8/16-bit events add some more variety too. For the most part, they’re just simplified versions of some of the Olympic events, but they’re a nice nostalgia hit too.

However, the 2D events will likely be kept out of your party game rotation because they’re all limited to two players. The standard events are for four, but the old-school sports are for one vs. one action only.

If you’re playing with three other people, you just have to ignore the new content if you want everyone to be involved at the same time, which is a baffling design decision.

For a few rounds, Mario & Sonic at the Olympic Games Tokyo 2020 is a great party game. The events themselves are varied and fun to play but the story mode that’s the draw for lone players moves along at a snail’s pace.

For another option to add to the party game collection, you could do a lot worse, but Mario & Sonic’s new Olympics outing is not a game you’ll want to spend hours at a time with.

Should You Buy Mario & Sonic at the Olympic Games Tokyo 2020?

If you enjoyed the previous games and are looking for a new Switch party game, yes.

Mario & Sonic at the Olympic Games Tokyo 2020 is out now on Nintendo Switch.

It is developed by SEGA of America and Sega Sports R&D.