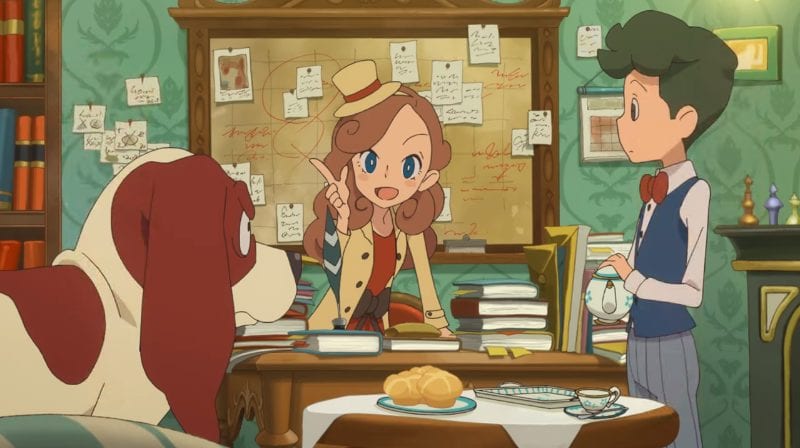 A couple years back, we saw the release of a brand new Layton game. You’d be forgiven for not remembering this one, though, as it was first released on mobile devices before stealthily coming to the 3DS. It also had a pretty long title: Layton’s Mystery Journey: Katrielle and the Millionaires’ Conspiracy.

I first played the game on an Android device when it launched, and while I enjoyed all the Layton-isms that made a good fit for a smaller mobile screen, it was also easily one of the weakest games in the series because of how it fell short in almost all other aspects.

For starters, the collection of puzzles in this one are weak and uninspiring. The story meanders quite a bit in its middle sections, only bringing things together right at the very end, and the characters and writing just didn’t feel quite as smartly written or compelling as they did in its predecessors.

Katrielle herself proved to be a lovable protagonist that I could get behind as the future face of the series, but Layton’s Mystery Journey certainly wasn’t the best debut for her. All my complaints about the original release definitely carry over to the Switch port that’s just dropped, but I was pleased to see that the game was still a perfect fit for a single-screen setup.

The Layton series have always been best enjoyed on the DS and 3DS, or a device with a dual screen setup and touch controls. However, with a few adjustments here and there, Level-5 has also found a way to make it work with just one screen.

The Switch’s display is big enough to fit in two screens’ worth of information, splitting it in half to give you all the hints you need on one side, with the actual puzzle visuals on the other.

Whether you’re playing the game on a bigger TV or in handheld mode, you’ll be pleased to know that the text is perfectly readable –a truly underrated feature, especially since I’ve spent the better part of my weekend squinting at the tiny text in Death Stranding’s endless menus.

Layton’s Mystery Journey is a joy to play on the hybrid console, and that was a genuine surprise to me, as I thought I’d miss the touch controls or use of a stylus to tap all over the environments and scribble down notes. While docked, you can also use motion controls with the Joy-Cons to point and click, though the analog sticks are perfectly serviceable in this scenario.

The Switch port also comes packed with all previously released DLC, including new outfits for Katrielle and even more puzzles for you to dive into. Not to mention the daily puzzle releases, just in case you needed even more content to chew through.

As always, Layton’s Mystery Journey proves to be yet another wonderful commute game thanks to its story setup and the way it’s broken up into chapters. It’s so easy to just hop in for a few minutes, try your hand at a new puzzle, and put the Switch away once you’ve arrived at your destination.

While I’m still not completely charmed by the game itself (which is a shame, considering how beautiful it is), Layton’s Mystery Journey does give me some comfort in knowing that this wonderful puzzle series has found a home on the Nintendo Switch.

The single screen setup will still take some getting used to for series fans, but Level-5 has done well in making it work, and that’s a good sign for future games to come.