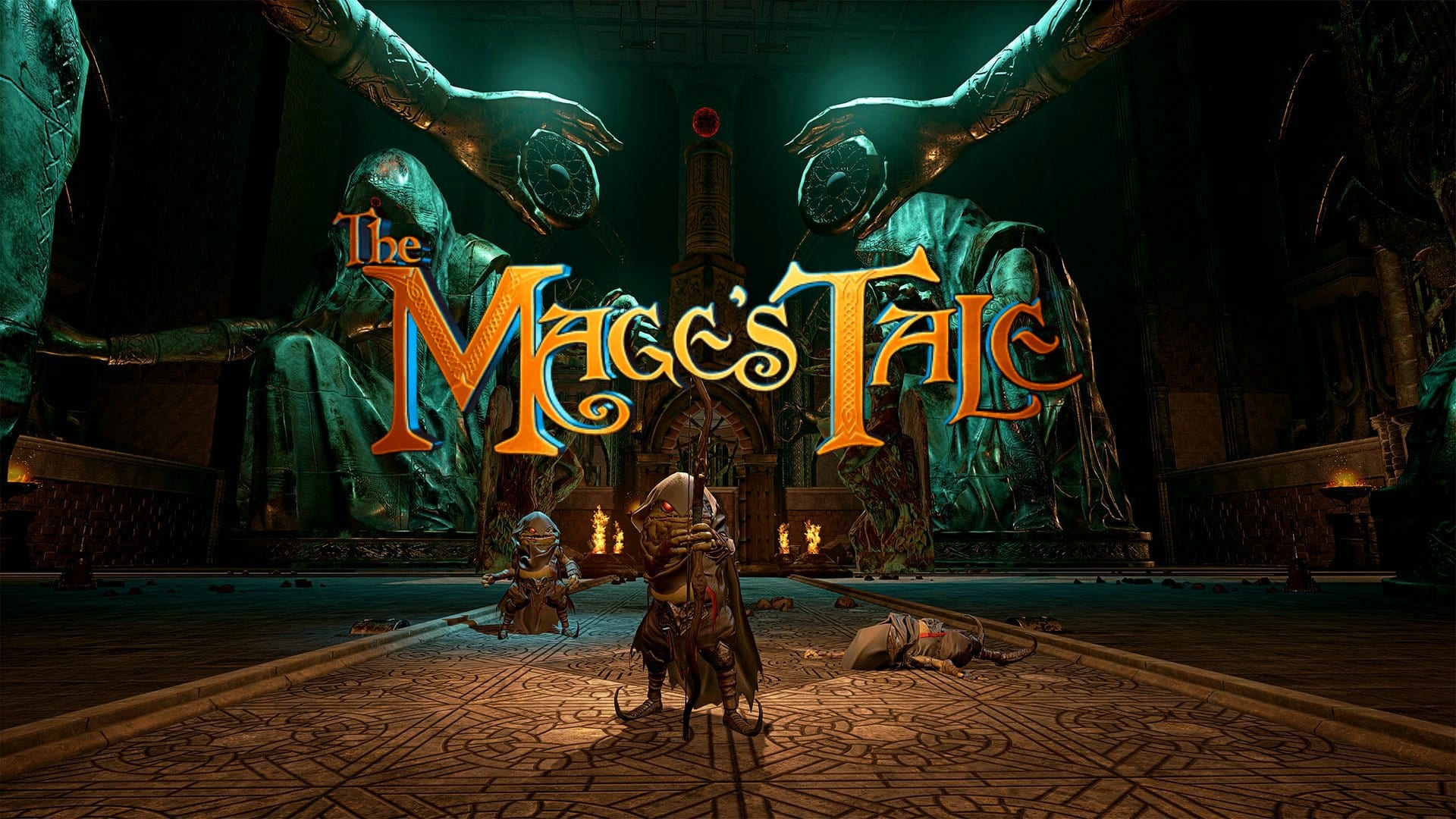 VR headsets such as Oculus Rift first hit the market over seven years ago now, but it’s taken software developers time to get their bearings. Only in more recent times have short VR “experiences” been joined by substantial, lengthy VR games that really engage players beyond just observing a novelty perspective.

inXile Entertainment’s The Mage’s Tale was among the first wave of these, a meaty role-playing experience in which players were able live out a power fantasy of weilding wizardly magic, set in the same universe as the developer’s esteemed A Bard’s Tale series.

As part of an on-going initiative to speak with developers about their interest and experiences working with VR, I spoke with inXile Entertainment’s Brian Fargo and David Rodgers about the story of how The Mage’s Tale came to be.

I was also keen to pick their brains about their thoughts on the future of the VR industry as a whole, too. Here’s what they told me:

Twinfinite Senior Editor Alex Gibson: Briefly, what prompted you to develop a VR game in the first place? Was it something born out of an interest to experiment with the technology in particular?

Studio head of InXile Entertainment Brian Fargo: I was immediately intrigued by VR when I first experienced it, and I wanted to experiment with a new medium and all its unique attributes.

The first time I tried a video game back in the 80’s I got a rush and thought about all the ways I could use them to bring our D&D dungeon crawling fantasies to life. VR gave me that same rush.

Alex: Would it be fair to say that VR offers developers a chance to make their creative mark on a new video game technology, which adds to the appeal of creating content for the platform?

Brian Fargo: VR offers a set of variables that developers have never had before; where are the players hands, where are they facing, unique audio challenges, and creating a sense of scale in a way that isn’t possible on a monitor. Creating experiences with new concepts and approaches is quite appealing to creative people.

Alex: What were some of the main goals from a creative standpoint that you set out to achieve when conceptualizing a VR action-RPG?

Brian Fargo: The Mage’s Tale was a fantastic learning experience in understanding the medium and using the technology to create an immersive experience.

The original dungeon crawler games had all their graphics in one little square in the corner, and we’ve of course come a long way in expanding that little corner to a full screen of 3D graphics, but this was really the opportunity to put them in that dungeon.

We wanted combat to be intuitive and to create a visual experience that would fully immerse the player.

Alex: Once the game’s development was in full swing, were there ideas and designs you had to leave on the table because they were technically too difficult to implement — either because of hardware constraints or your limited experience with the technology?

Creative director David Rogers: Our design shifted a few times during development. We started with the idea that maybe combat could basically be turn-based. We understand turn based combat systems here at inXile so naturally we though that’d be our starting point for Mage’s Tale.

When we started prototyping, we quickly realized that the immersion we gained from being VR was being lost by the unnatural movements and timing of turn-based enemy AI.

Watching an enemy bobbing in an idle animation while I choose my next action on PC feels ok, but it feels very odd when I can move my body and hands around freely in VR. We knew we wanted to stay in first person for immersion, and we wanted spell casting to feel frenetic and use full motion controls, and that we wanted the enemies to feel alive and menacing.

For those reasons, we overhauled our whole combat system, and much of the level design, to support real time combat.

From the technical perspective, maintaining 90 frames per second is a big deal when doing VR development. There were a lot of cool, big, and expensive VFX techniques we had to move away from because they were simply too intense to run at 90 FPS.

Alex: InXile has obviously developed both VR and ‘traditional’ games. How do the challenges of developing each differ? Were there issues along the way that you had to almost invent solutions for, given that VR is such nascent technology (we’d love to hear an example)?

David Rogers: Almost every aspect of game development is a little different when you’re building for VR. Artists must account for every object and every environment prop looking good from every angle and every distance.

Normally, in a traditional game, you don’t have to spend time ensuring the bottom of a table looks good because we KNOW the player will never see it, because we’re in control of the camera.

The attention to art detail for VR games must be higher because you have to put the player in full control. You need to let them pick things up, inspect them, and throw them away, and each prop needs to support that.

From a User Interface design perspective, you’re forced to throw out the entire rule book. Having lots of bars and numbers floating around not only damages immersion, which is the key strength of VR, but it also doesn’t really work as well. We put a huge focus on making each menu interface reinforce that feeling of being a wizard.

Crafting spells involved cooking them in a cauldron, summoning an arcane sigil, and grabbing and placing the spell with your hands. Your stats page was re-worked into a book you have to grab and open. One massive challenge is actually ensuring a player knows they’re taking damage or is dying.

At various stages, we had very literal health-bars on the screen, but it looked bad, and players didn’t tend to look at their peripheral vision during intense moments of combat.

We moved your health indicator to the back of your hand so you could read it like a watch, but we also had to do a TON of work to rumble your controllers, change post-processes on the screen, alter the audio, and basically every non-UI method at our disposal to let you know you were in danger.

From a gameplay perspective, you’re playing off a whole new set of player verbs. Because of the HMD tracking and touch controllers, there’s a TON the player is capable of beyond W, A, S, D, and Left-Click.

3D sound is also far more effective in VR because the player can move their head around in real time.

We tried to build gameplay that would involve throwing and catching random objects in the world, literally dodging traps, locating sounds in 3D space, pressing hidden switches in the world, pulling and pushing objects, and basically every type of hand and head related motion we could conceive.

One of my favorite versions of this was our Scrying Orb. The player would reveal hidden clues in the environment by picking it up and holding it in front of their face to view the world through this glass orb.

Alex: As part of the first wave of video game studios designing VR games, did you find there was a helpful community of other developers willing to share ideas and provide useful insight if required? Was this ever something you called on to help shape The Mage’s Tale in any way?

David Rogers: We were lucky enough to be an Oculus Studios title. Oculus Studios provided us with a ton of help, with other titles to play, direct guidance from Oculus staff, early versions of prototype products, and on some occasions even connected us up with other Oculus Studio teams to give us detailed explanations on how they implemented certain features.

Alex: Are there plans to release a sequel to The Mage’s Tale of any sort, or if you’d rather not give us a scoop right here and now, perhaps you could comment on whether another delve into VR design moving forward is on the cards for InXile?

Brian Fargo: We’re working on another VR title right now, but it’s not a sequel. We’re really charting some unexplored territory for inXile with this one. We’ve actually been working on it for a few years in secret and are getting pretty close to sharing more. I will say that I’ve always been fascinated by emergent gameplay, and exploring that space is exciting.

Alex: What do you think of AR as a technology? Does InXile have any interest in developing AR games, perhaps on mobile devices?

Brian Fargo: My belief is that AR and VR will eventually be combined into one. I expect it will simply black out the background and you’ll move seamlessly from AR to VR. With that said, we don’t have any AR projects in development.

Alex: What do you think of Vive Cosmos and Oculus Quest? Are these more streamlined VR units likely to make a difference to the technology’s accessibility in a way that makes you believe VR’s mainstream watershed moment is just around the corner?

Brian Fargo: It’s been an enthusiast market until now, but I think we’re going to see that change rapidly as products like the Oculus Quest, which doesn’t have a big PC hardware investment needed, and full freedom of movement without cables, as the real turning point. Oculus has been thrilled with the software units being sold on the Quest.

Alex: InXile’s studio mantra has always been about creating the gaming experiences InXile wants to make first and foremost, which I assume is a policy that Microsoft endorses. But does that extend to VR? Is Microsoft happy for InXile to pursue VR projects in a concentrated fashion if that is what the studio wants to do? I’m curious as to whether VR is considered a side-show, or whether it’s moving toward becoming a viable platform for full-scale development, supported by a parent company like Microsoft.

Brian Fargo: We don’t know what the future truly holds beyond the projects we’re working on. I can say they’ve been entirely supportive of the projects that were in development before the acquisition; namely The Bard’s Tale IV, Wasteland 3, and the unannounced VR title.

That concludes our interview with inXile Entertainment, but if you’re interested in further insight into VR development and the future of the VR industry, do check out our recent article with supporting commentary from UK publisher/developer Coatsink, another studio working closely with Oculus.