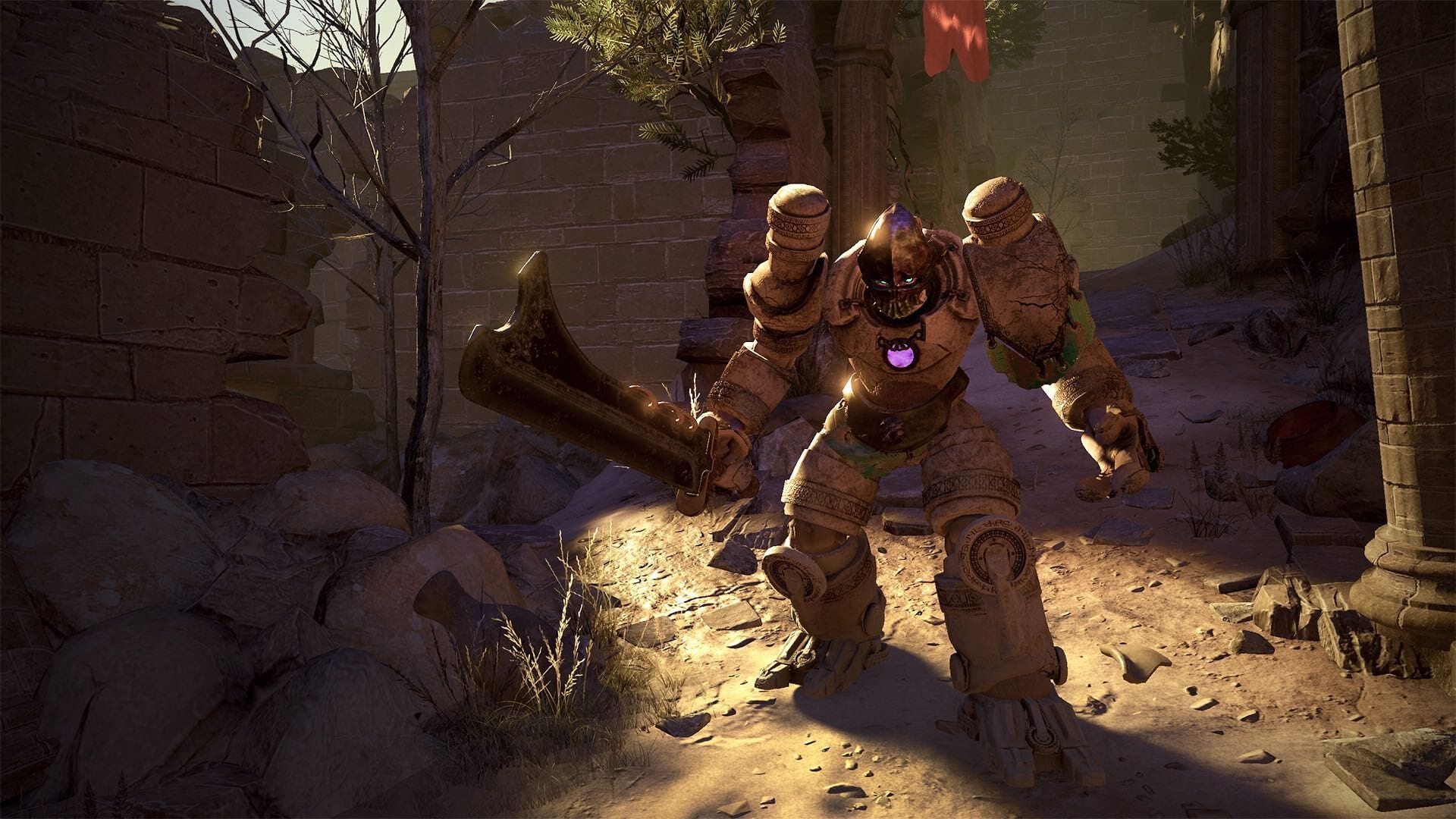 Initially revealed at PSX nearly four years ago, Golem was one of the most exciting games shown off by Sony in the early days of PSVR, boasting a development team made up of ex-Halo veterans and promising a fully-fledged adventure game.

However, while Highwire Games have come up with some cool ideas that work well in VR, some of the design choices are genuinely baffling, to the point that I found it difficult to play at points, and other players will likely find it impossible to get through.

You play as a young boy who’s bed-ridden and that uses a strange device to control the titular Golems, and occasionally smaller creatures, as you search some ruins to find treasures and discover what happened to your sister.

As you make your way through the world, you’ll fight other Golems to get new items that make you stronger and allow you to reach otherwise blocked off locations.

We’ll dive into the combat and world design later on, both of which have their own issues, but let’s begin with the design choice that almost every issue stems from in Golem, which is the movement system.

Since PSVR’s launch, there has almost been an assumption that games would adopt one of two movement options. Brave players can choose free movement, using a controller’s thumbsticks normally, while other players feel more comfortable with teleportation that sees them jump around from place to place.

While neither option is perfect, either reducing immersion or risking motion sickness, we’re yet to find a better one. Golem tries something a little different and not only it is not an improvement but it’s considerably worse than the options we’re familiar with.

To move, you hold the trigger on the back of the Move controller in your right hand and lean forward (lean back to go backwards), turning by looking where you want to go.

Not only does it feel strange, particularly for the chore that is the first couple of hours, but it’s uncomfortable and awkward too. When you lean forward, unless you consciously keep your head up, the weight of the PSVR headset pulls forward on your head, frequently messing with the focus of the screen.

Also, you can only look where you’re going while you’re moving. To look to your left or right, to see where enemies are, you need to stop. Then, if you don’t remember to reset the position you’re sitting in, you’ll just lean further and further forward each time you stop until you start getting a backache.

The issues don’t stop there though. Movement is also really slow. Your golem trudges around the world as you stare at the dusty locales. Also, for a reason I’m still yet to work out, the golem’s vision is an overlay on the vision of the boy you’re playing as, so his bedroom flashes in and out of your peripheral vision throughout.

For some people, just moving around Golem’s world is going to be too much to bear. I never felt sick myself, but I did have to close my eyes a few times to make sure that the nausea didn’t hit me.

There is one bug that needs to be noted though. Frequently, when I returned to the boy’s room after a run, it wouldn’t load properly.

The head tracking would be weirdly inverted and squashed (which will make many players feel worse than any game has before) and the item that allows you to begin a new run wouldn’t appear, forcing me to quit the game and lose the items that I’d equipped for the run I was about to start.

Visuals bugs in VR games are understandable for the most part, but one that could make your players physically sick is unforgivable, especially when it’s paired with progression loss.

What makes the movement issues even worse, though, is that unnecessary movement is such a big part of Golem. Progression has a lot of Metroidvania influences, with you finding masks by killing golems, allowing you to open doors elsewhere in the world.

Each time you die, you’re able to respawn with whatever items you found in the last run, trying to get further in the next attempt.

The masks idea is cool as it gives you an idea of what to look out for, but having to trudge slowly through the world each time, especially with the god awful movement, is boring and painful.

That’s made worse even more by the fact that Golem doesn’t really explain how anything at all works. It’s less of an issue with combat, which is simple to understand, but what masks do, where to go, what you’re looking for, and what you need to progress is for you to work out yourself.

When you get into a longer run, with some actual progression that introduces something new, the structure is enjoyable, but the issues make the failed runs so much of a chore that you’re often too frustrated to enjoy the successes when they finally come.

It’s combat moments that break up the exploration in Golem, and it’s once again a case of the good and the horrible.

Fighting golems is pretty simple in theory. You use the variety of weapons to block your opponent’s sequence of four or so swings before hitting them in glowing parts of their body. After a few rounds of blocking and countering, the golem disintegrates and you can collect their amulet, mask, and weapon to take into the next run.

Sometimes, it’s a case of wildly swinging your Move controller, but it’s good fun when you’re smashing through golems and blocking every sequence of attacks perfectly.

However, if you get hit, the move controller bugs out, making it difficult to react to the next attack and compose yourself again; you need to be on the same flat ground as the enemy golem and in an open area to make the fight play out smoothly, and they respawn on every run, adding even more padding each time.

It meant that I’d just try to run around golems when I could, avoiding combat to make some progress. Also, there’s no way to see how much health you have, so avoiding weaker golems is smart to ensure that you’re at peak performance level once you reach the end of your previous run, to give you the best chance of making it further.

However, that only makes the chore of each run worse and emphasizes the movement issues.

Where Golem actually impresses though is in its visuals and story. It’s one of, if not the best, looking games I’ve played on PSVR, with the desert ruins being beautifully detailed and floating dust particles being very well utilized.

The characters look great in the early cutscenes in particular and it’s an interesting story. The choice to tell the story through audio logs that are connected to glowing orbs you collect through the world is odd since most of them are just a sentence or two long and it could be ages between them. That means it’s easy to forget what happened in the previous one.

For the most part though, Golem feels like a PSVR game that became lost in a mess of ideas during its various delays. The nearly unbearable movement, best-avoided combat, and frustrating progression system makes it a game that’s an absolute chore to play though and one of PSVR’s biggest disappointments.

Should You Buy Golem?

No, there are so many better PSVR games.

Golem is out now on PS4 via PlayStation VR.

It is developed by Highwire Games.